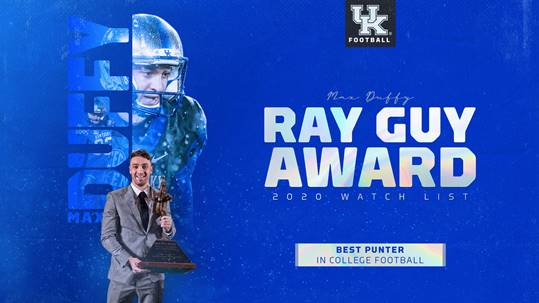 University of Kentucky senior punter Max Duffy is one of 19 candidates on the preseason watch list for the 2020 Ray Guy Award, it was announced Wednesday by the Augusta Sports Council. Duffy was the winner of the 2019 Ray Guy Award which honors the nation’s top collegiate punter.

The Perth, Australia native was an absolute weapon for the Wildcats in 2019. Kentucky led the nation in net punting with a 44.55-yard net average and Duffy led the nation in punting at 48.10 yards per punt. Along with winning the Ray Guy Award, he was named a first-team All-American by Walter Camp, the AP, Sporting News, ESPN, FWAA, AFCA Coaches’, The Athletic, USA Today, Phil Steele and Athlon Sports. He is UK’s career punt leader with a 46.3-yard average.

The number of eligible candidates for this season will grow when the award opens nominations on July 23. The complete list of candidates will be released on November 10. In mid-November, the Ray Guy Award committee will meet to select the 10 semifinalists, who will be announced on November 24. A national body of Football Bowl Subdivision (FBS) sports information directors, media representatives and previous Ray Guy Award winners will then vote for the top three finalists to be announced on December 2. After the finalists are named, the voting body will cast ballots again to select the nation’s top punter. The winner will be announced live during The Home Depot College Football Awards airing on ESPN on Thursday, December 10, 2020.