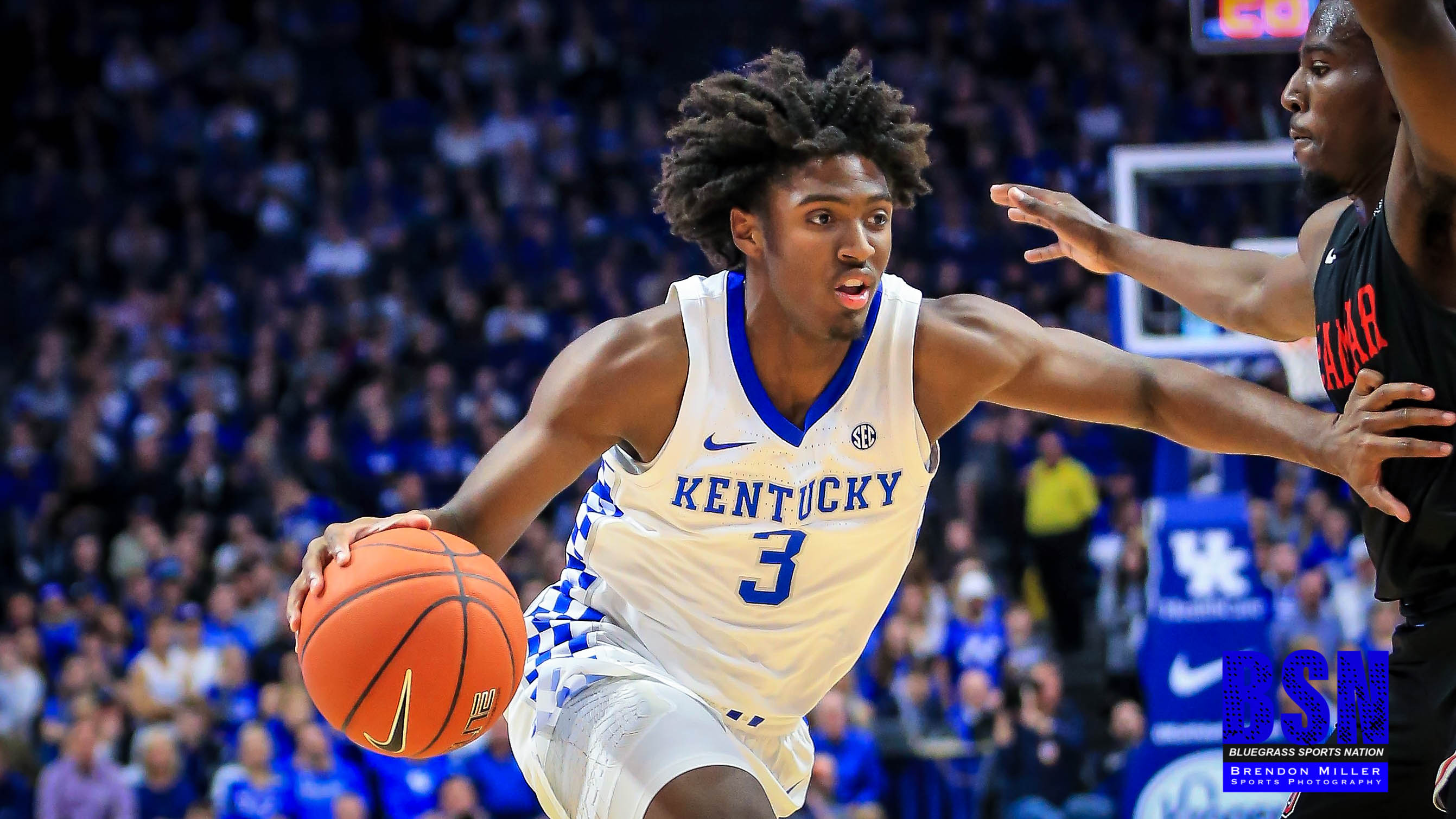 Lamar coach Tic Price things there are better days ahead for the freshman guard.

“I think he is going to bring some exciting moments to Kentucky basketball this year,” Price said after watching Maxey score 21 points to lead the No. 9 Wildcats to an 81-56 win over the Cardinals on Sunday in Rupp Arena.

Maxey scored a career-high 26 points in Kentucky’s season-opening win over Michigan State, but his performance against Lamar, especially from long-range, was perhaps his best outing of the season. Even though he had made just three shots from long range in the previous four games, Maxey stayed in the gym and stuck with his routine.

“I stayed with my training and getting shots in at night time, in the morning and I’m confident in myself,” he said. “I feel like I’m going to make the next one, no matter if I miss, make (the previous shot). I’ve put in too much work to have that kind of thought process after a miss. Every time I shoot, I think it’s going in.”

He could hardly miss against the Cardinals and connected on a career-high four 3-pointers against out-manned Lamar. Those four treys came during a 22-2 run late in the first half that put the game away and gave the Wildcats their third straight victory, including two consecutive blowouts.

“It’s what stretched the game out,”  Calipari said. “Like, those baskets like bang, bang, bang. And he knows, if it’s in transition, he can take it. Like, if we throw it ahead and he’s open in transition, don’t drive it, just shoot that ball.”

He did just that and his teammates made sure Maxey was the intended target on offense.

“Coach Cal always said he is going to the hot hand,” Maxey said. “I think in the last game, Ashton (Hagans) had 30 and we went at him four times in a row and so that’s the rule with this team and I feel like my teammates did a good job finding me and I would do the same for them.”

On this night, it was Maxey who made things easier on his teammates.

“Tyrese is a great shooter,” freshman guard Keion Brooks said. “When he gets hot like that, we just want to try to get him the ball and let work and also be ready at the same time. When he’s doing what he was doing tonight, it makes it a lot easier for everybody else.”

Behind the scenes, Maxey said his main priority goes beyond the arc and wants to improve in every phase of his game.

“I just try to work on all aspects of my game — mid-range, 3-pointers, getting to the lane, free throws and today, the 3-pointer was there,” he said. “They were in a zone and confident I was going to hit shots and I made them.”

Routinely, Maxey admits he doesn’t see a “shot that I don’t like” and also doesn’t mind taking consistent criticism from his coach.

“He is always hard on me and I’m grateful for it,” he said. “At the time, it doesn’t feel good, but I mean, he loves us all and he’s going to coach us really hard. He wants to win just like we do and I’m thankful for it.”

Largely because of Hagans and Maxey, the past two convincing wins have been a confidence-builder for the Wildcats and Maxey said they are just getting started.

“I feel like the team is really jelling,” he said.”Coach Cal has done a really good job and we’re just playing our roles and it’s helping everybody get better. We’re just getting comfortable. We’re young and we have to jell. This is our first time playing with each other like this and I think we’re doing a pretty good job.”