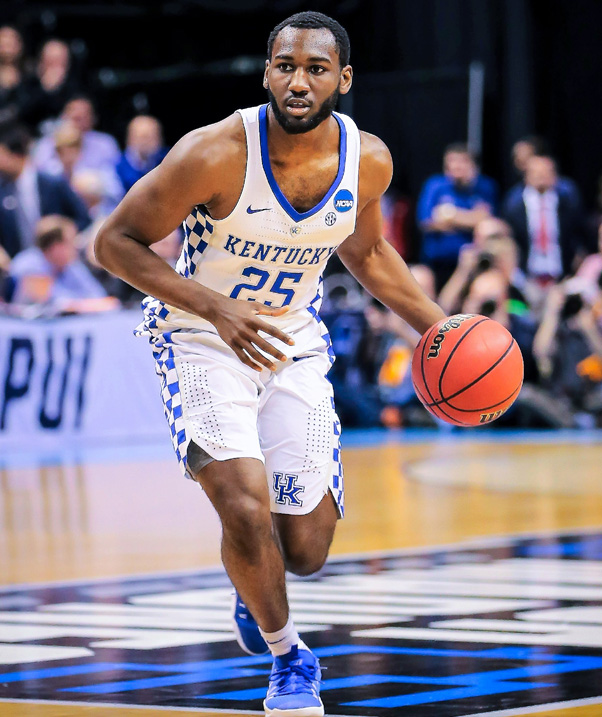 Hawkins with the drive – Photo by Brendon Miller

The second weekend of the NCAA Tournament is the proverbial emotional roller coaster ride for die-hard Wildcat fans like me. I love the weekend and yet, I hate the weekend.

I love the exhilaration of knowing your team is one of sixteen teams still with a chance to win it all. I hate the realization that at any time during the weekend, your team can be sent packing, its season ended with a bad call or unlucky buzzer beater.

I still love the images of Jorts playing dodge ball with Jared Sullinger as Kentucky upset top-seeded Ohio State during the second weekend of the 2011 tournament. I still hate the memories of Kentucky clanking 28 of 32 three-pointers off the rim in their loss to West Virginia in the second weekend just a year earlier.

I love the idea of an iconic Malik Monk monster dunk sending the Wildcats to the warm sunshine and dry desert air of the Final Four in Phoenix. I hate the agony of a possession by possession last minute game, fraying your nerves as the hopes of an entire BBN perch precariously on a De’Aaron Fox pull up floater.

Ahhh, Memphis! Land of blues, barbecue, and Beale Street. Perhaps John Calipari’s homecoming to Memphis rings just as bittersweet. On one hand, he returns triumphantly to the town of many of his past professional successes. After all, his tenure coaching the Tigers eventually led him directly to his dream job at the University of Kentucky. On the other hand, he’s been ostracized by fickle Memphis fans who claim he left the program for greener pastures just as the NCAA came a knockin’. Regardless, Cal returns to this Mississippi River port with a Wildcat team on a hot streak—a team with 13 straight victories looking to make it to his fifth Final Four in his eight seasons at Kentucky.

It won’t be easy. Standing in the way are heavyweights UCLA and North Carolina. By the second weekend of the tournament, Cinderella usually has gone home and only contenders remain. To advance at this stage, you’ve got to knock off some of the big boys. The Bruins beat the Wildcats 97-92 in Rupp Arena back in early December in a highly entertaining game in which defense was “optional.” Since that time, Kentucky’s defense has improved while UCLA still doesn’t believe in guarding anybody. Throw in the revenge factor, the improved contribution of UK’s seniors, and some timely quotes from Lonzo’s dad, and I’ll pick the Cats in a Sweet Sixteen squeaker.

Up next will most likely be the University of North Carolina Tar Heels. The team from Chapel Hill has had a virtual cakewalk of a post-season draw, advancing easily against Texas Southern before being pushed to the brink by Arkansas. The boys in powder blue have put behind them an ongoing academic fraud investigation and some in-state transgender bathroom issues to munch on the Greenville portion of the bracket the NCAA Selection Committee handed to them on a silver platter. Should they get by the Butler “juggernaut,” they’ll be the ones looking to avenge a 103-100 loss to the Wildcats in Las Vegas earlier this season. Carolina has the length, inside presence, and tournament experience to confound the Cats. They can bury you in a second and in the immortal words of Michael Jordan, “their ceiling is their roof.” There’s simply no analytical reason for a sane person to pick Kentucky.

Any yet, something tells me the Wildcats will rise to the occasion. Maybe because Malik Monk goes nuclear again. Perhaps because “crying Roy” needs another encore. Or just maybe, because all of BBN will collectively WILL the Cats to victory, I say Kentucky remains standing after this second weekend. Of course, form held true in this portion of the bracket as all the top four seeds advanced. Kentucky never catches a break. One thing’s for sure—with Carolina, UCLA, Butler, and UK all coming to town, Memphis will be clothed in several shades of blue. By this time next week, however, Wildcat Blue will be Arizona bound!