No. 13 CATS Scrape By in a Bounce-back Win Over Visiting Tigers 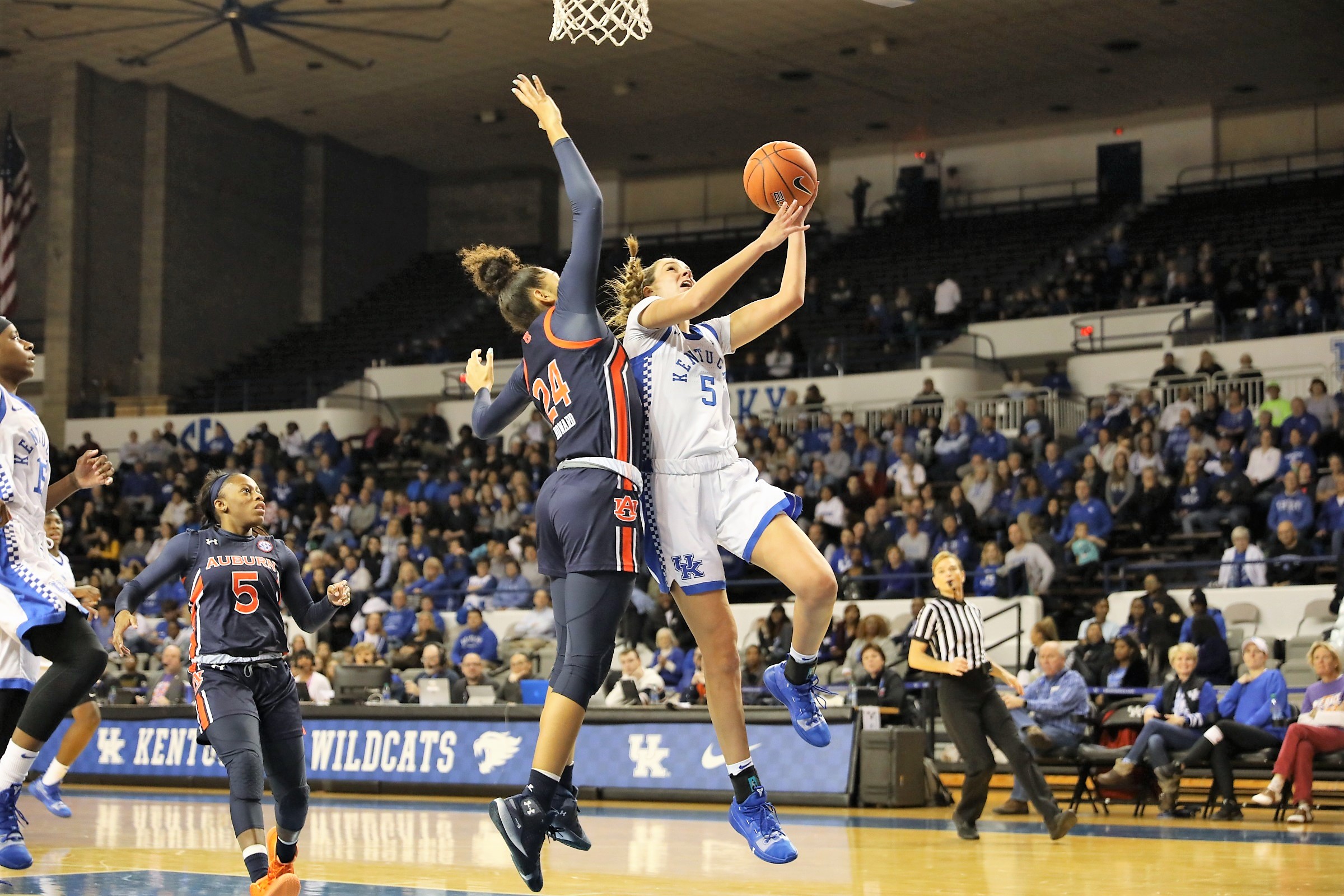 The No.13 ranked Kentucky Wildcats Women’s basketball team returned to Memorial Coliseum on Monday night, scraping by with a bounce-back win over the Auburn Tigers after a shocking loss at LSU last Sunday before the bye-week.

Kentucky played host to the visiting Auburn Tigers on Monday night looking to avenge an unexpected loss handed to them by the LSU Tigers in their last outing.

If it wasn’t clear enough from last week’s loss, then this game emphasized Coach Mitchell’s message even more; Nothing is given in this conference, everything must be earned.

Even though on paper the Cats were the much better team, Auburn was not to go down quietly or easily.

Even after some sloppy play and 4 first quarter turnovers, Kentucky was able to end the period with a 21-13 lead thanks to the hot hand of Sabrina Hanes who tallied 8 points in the quarter to lead the way for the Cats.

Coming out in the 2nd quarter, while still having their defensive and rebounding struggles, Kentucky found their stroke and quickly dropped in their 5th three-pointer of the game and grew the lead to 29-18 before forcing Auburn to burn their first timeout with 7:33 still remaining in the half.

Following the timeout, the Tigers still struggled to find any form of offensive rhythm due to Kentucky’s full-court man-to-man pressure and the Cats were able to force another two turnovers and another Auburn timeout with 4:45 left in the half after taking a 37-20 lead.

The final few minutes of the first half had Auburn written all over them, but even through Kentucky was able to head into the break holding a 44-28 lead. The Cats were led by the team shooting 51% from the field, as well as the team pouring in 7 first half three-pointers. Kentucky also won the first half rebound battle 18-14, as well as winning the turnover battle 14-9.

After the much-needed break, Auburn came out on fire.

Or maybe it was just Kentucky came out extremely cold?

Either way, the Tigers lit up the scoring column and forced 6 Kentucky turnovers in the period to take control of and make this a contest again.

It wasn’t until there was only 2:28 to remaining in the quarter that the Cats saw their first basket go in and after a rough one they were able to end the quarter with a 51-47 lead.

To say the least, and as expected, the 4th quarter was an all-out battle.

Both teams went on runs of their own, trading baskets and forcing turnovers. It wasn’t until there were 3 minutes to play and Rhyne Howard made her return for the Wildcats that they were able to take back control of the game.

In the end, after many Wildcats stepped up and hit big shots in Rhyne’s absence, Kentucky was able to scrape by and leave Memorial with a 68-61 victory to improve to 16-3 on the season.

Kentucky was led in scoring by Senior Guard Sabrina Haines who tallied 17 points, 5 rebounds, and 1 assist.

In addition to Sabrina’s hot hand, the Cats were also led by their own defensive intensity, which forced 26 total turnovers and caused the Tigers to shoot only 45% from the field.

The Wildcats improved to 16-3 (5-2) on the season and will take the floor again Thursday night at 7 pm in Columbia, Missouri in a conference match up with the Tigers of Mizzou.