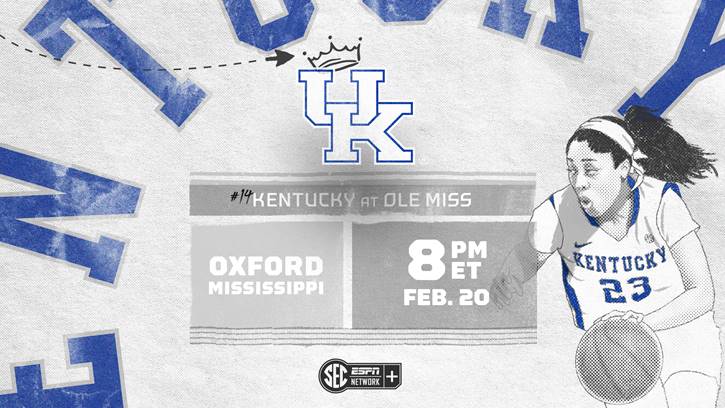 Wildcats and Rebels square off at 8 p.m. ET inside The Pavilion at Ole Miss

LEXINGTON, Ky. – Looking to keep its momentum going following the thrilling win over top-10 ranked Mississippi State last weekend, the No. 14 University of Kentucky women’s basketball team travels to Oxford, Mississippi to take on the Ole Miss Rebels on Thursday inside The Pavilion at Ole Miss. The game will tip at 8 p.m. ET on SEC Network+.

SEC Network+ is available through WatchESPN on computers, smartphones or tablets. Darren Headrick will have the call on the UK Sports Network on 630AM WLAP in Lexington. Live stats and free live audio will be available online at UKathletics.com.

Kentucky (19-5, 8-4 Southeastern Conference) earned its biggest win of the season Sunday vs. No. 6 Mississippi State, limiting the Bulldogs to a season-low tying 62 points on the way to a 73-62 win. The Wildcats held the Bulldogs to nine points in each the first and third quarters tying a season-low points scored in a quarter for MSU and the first time it’s been held to single digits twice in a game. The win for Kentucky was its first over a top-10 team since taking down No. 2/3 Mississippi State back in February 2017 in Lexington.

Sophomore guard Rhyne Howard led Kentucky with 26 points adding 10 rebounds for her 10th double-double of the season. Howard surpassed the 1,000 career point mark during the game, becoming the second-fastest player in program history to reach 1,000 points. Because of the strong game and accomplishment, Howard earned her fourth SEC Player of the Week honor this season. Sophomore guard Chasity Patterson scored 15 points while senior guard Jaida Roper scored 14 points going 7-of-8 from the free-throw line. UK outscored the Bulldogs 22-9 in the third quarter and then scored the first four points of the fourth quarter to take its lead to 20 before State ended the game on a 21-12 run to close the gap late.

Ole Miss leads the all-time series in games played against Kentucky, 23-18. The Rebels lead the all-time series in games played in Oxford, 13-7. Ole Miss has won three of the last five meetings overall, including two of the last three in Oxford. Last season, Ole Miss upset the Wildcats in Lexington 55-49. Matthew Mitchell is 9-4 as Kentucky’s head coach against Ole Miss all-time.