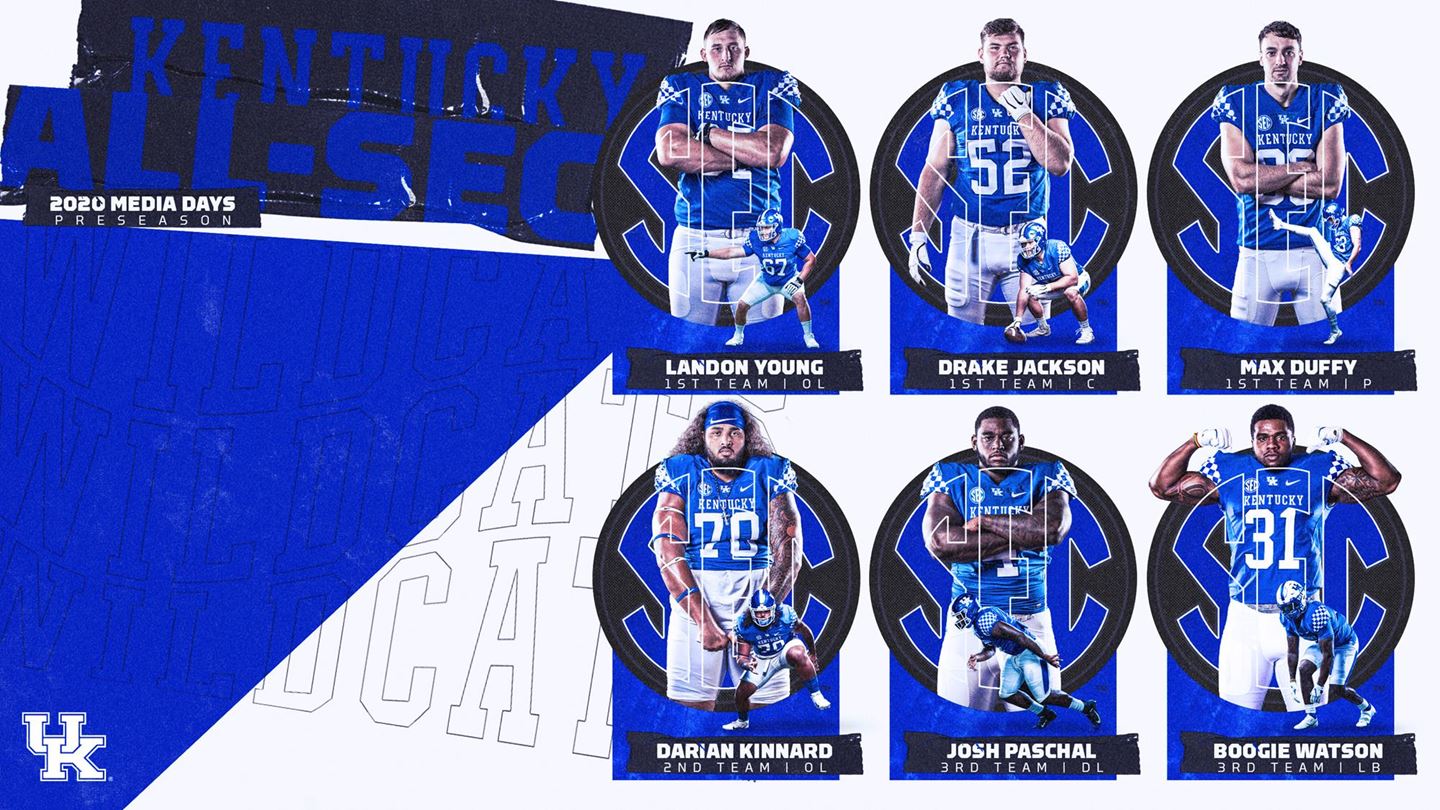 The Kentucky football team had six players named to the 2020 Preseason All-Southeastern Conference Team as voted on by the media, it was announced Wednesday by the league office.

Kentucky also was picked to finish fourth in the Eastern Division behind Florida, Georgia and Tennessee.

Duffy, a native of Perth, Australia, will play his final season of collegiate football after an impressive showing in 2019. Kentucky led the nation in net punting with a 44.55-yard net average and Duffy led the nation in punting at 48.10 yards per punt. Along with winning the Ray Guy Award as the nation’s top punter, he also was named a first-team All-American by Walter Camp, the AP, Sporting News, ESPN, FWAA, AFCA Coaches’, The Athletic, USA Today, Phil Steele and Athlon Sports. He is UK’s career punt leader with a 46.3-yard average. Duffy has been named to seven preseason All-America teams so far this season, and was a 2020 preseason first-team All-SEC choice by Athlon Sports and Phil Steele’s College Football.

Jackson, a native of Versailles, Kentucky, started at center in all 13 games last season and was a candidate for the Rimington Trophy, given to the nation’s top center. He now has a team-high 33 consecutive starts as the anchor of Kentucky’s offensive line, the “Big Blue Wall.” He was named to the preseason All-America Second Team by Athlon Sports and was a preseason first-team All-SEC selection by Athlon Sports and Phil Steele.

Lexington native Landon Young has appeared in 36 career games on the “Big Blue Wall,” starting in all 13 games in 2019. He totaled 64 knockdown blocks and missed only one assignment in 754 plays last season, earning a spot on the 2019 All-SEC Third Team by Athlon. This preseason, Young was on the All-SEC First Team by Pick Six Previews and was a second-team All-SEC choice by Athlon and Phil Steele.

Paschal, of Prince George’s County, Maryland, started in all 13 games in 2019 after missing the 2018 season with malignant melanoma on the bottom of his right foot. In his comeback, he totaled 34 tackles, including 9.5 tackles for loss, 3.5 sacks, one PBU, two forced fumbles, one PBU and one blocked kick.

Watson, of Brandywine, Maryland, is coming off an impressive junior season that saw him total 36 tackles, a team-high 11.5 tackles for loss and seven quarterback hurries, starting in 11 of 13 games, including nine in a row. He is the SEC’s leading sack returner after also totaling 6.5 total sacks last season. Watson is currently on the Bednarik Award Watch List, given to the nation’s top defensive player, and he also has been tabbed a preseason All-SEC Second-Team performer by Athlon Sports, and Phil Steele.

Kentucky opens its 10-game SEC schedule Saturday, Sept. 26 at Auburn. The game will be played at noon ET on the SEC Network (television) and the UK Sports Network (radio).