Stumler and A. Skinner Lead No. 3 Kentucky to Sweep of Georgia 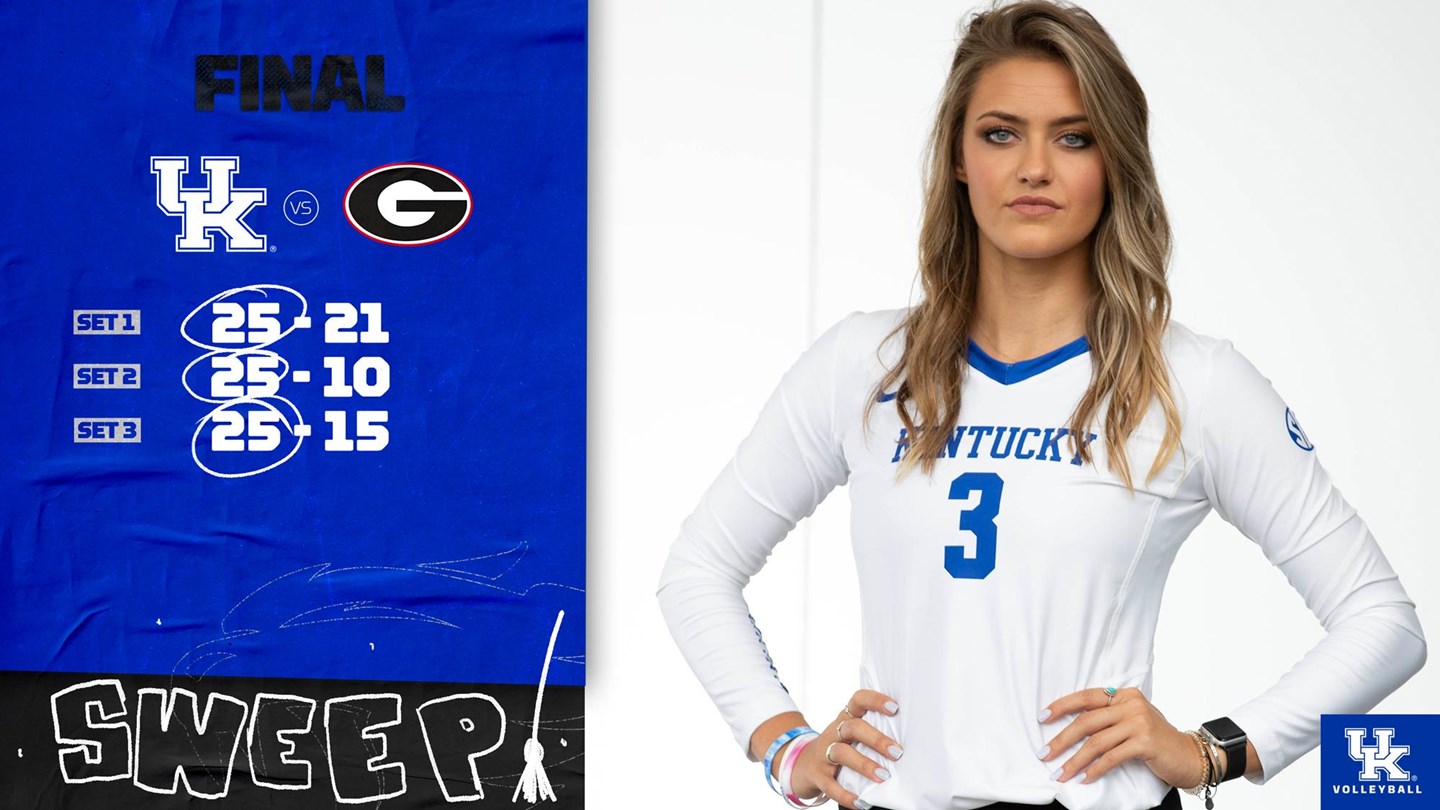 Wildcats have won 27 sets in a row

The defense for UK was also strong, as Kentucky held UGA to .088 hitting in the match and both Gabby Curry and Lauren Tharp co-lead the Wildcats with 12 digs apiece.

In the blocking department, Azhani Tealer registered four blocks to lead all players in the match. Additionally, Lilley was lethal at the net collecting three stuffs, to go alongside blocks from Elise Goetzinger and A. Skinner.

Kentucky is now 12-0 on the year as the 2020-21 Southeastern Conference volleyball season officially hits the halfway pole for the Wildcats. UK maintains a two-match lead on Florida (12-2) who currently sits alone in second place in the league.

UK will return home to Memorial Coliseum for the first time all spring on Saturday afternoon at 4 p.m. ET against South Carolina. The match will be shown on the SEC Network+, ESPN3 and the ESPN app.

Set One
Kentucky raced out to a 7-3 lead in the first set thanks to kills by Alli Stumler and just 10 points in to the match, Georgia elected to call its first timeout of the set to talk things over. Head coach Craig Skinner won a challenge in the middle stanza of the set to put Kentucky up 13-6 as a ball was overturned to out and the call went UK’s way. An Alli Stumler kill from the back row followed up by a nice roll shot at the net from Avery Skinner pushed UK’s lead to five points at 20-15 and Georgia called its second timeout of the frame. Skinner came out of the timeout with an ace and that bulked Kentucky’s lead to 21-15. Georgia won four-successive points to pull within three at 22-19 and that pushed UK into calling its first timeout of the set. The three-point gap was the closest UGA had been all set since it was 6-3. Stumler closed the set with her eighth kill of the match and Kentucky took the first set, 25-21.

Set Two
Thanks to kills from Avery Skinner and great serving from Azhani Tealer, Kentucky raced out to a 7-2 lead in the second set and forced Georgia into an early timeout. Senior setter Madison Lilley was on fire in the early part of the frame, spreading the ball all around the offense and letting Stumler and Skinner terminate the ball with ease. Madi Skinner’s arm came alive in the second set as she had a pair of cross-court kills that pushed UGA into a timeout with UK ahead, 14-5. UK extended its lead on a 5-0 run as the run was capped off by a dump from Madison Lilley at the net for her second kill of the match. Kentucky closed out the set with Stumler’s 10th kill of the match and hit .452 to take the frame, 25-10. The 10 points allowed in the second set are Kentucky’s fewest points allowed in a set in an SEC road match since Oct. 20, 2019 at Alabama (allowed seven points in both the first and third sets)

Set Three
Kentucky and Georgia were nip and tuck for the first 14 points of the stanza before UK created the first bit of separation to take a 13-7 lead thanks to a sizeable 6-0 run that sandwiched a Georgia timeout. Kentucky’s lead ballooned to eight points on an Avery Skinner kill to make it 20-8 as UK saw the finish line within sight and got to within five points of closing out the match. An attack error ended the match, and Kentucky closed out the series with a 25-15 third-set win.