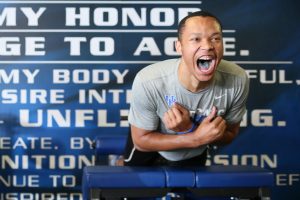 “I’m disappointed I won’t be able to join my brothers on the court to start the season but I’m looking forward to getting my knee back to 100 percent so I can help this team chase our goals,” Baker said. “I want to thank everyone for the well-wishes and I can’t wait to get back out there with the team.”

Baker arrived at Kentucky in the summer and participated in workouts. After experiencing soreness in his left knee during the preseason, Baker underwent further evaluation and was recently recommended to have surgery.

“Jemarl let us know a few weeks ago that something wasn’t feeling right with his knee,” UK head coach John Calipari said. “He had surgery before he got here and it didn’t heal quite like we had hoped it would. The good news is, with this surgery we’re going to get this thing right and get Jemarl back during league play. We were hopeful he would provide us some immediate shooting, but now it’s like getting a midyear guy that can help provide us some depth as we get into the heart of our season. Our main focus at this point is getting him healthy for the rest of his career.”

Baker was tabbed as one of the premier shooters in the country coming out of high school. A consensus four-star prospect ranked among the top 100, ESPN ranked him as the 66th overall player and the 16th-best shooting guard in the class.

The 6-foot-4 guard averaged 17.1 points, 4.1 assists and 3.5 rebounds per game as a senior and led Eleanor Roosevelt High School (California) to its first-ever state title. He hit 94 total 3-pointers during his senior campaign and shot 44 percent from long range as a junior, leading the Under Armour circuit in 3-pointers last summer.