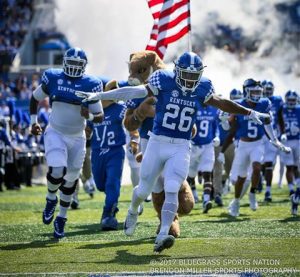 Ty Back – Lexington, KY
The Kentucky Wildcats (1-0) opened their 2017 home stand by hosting the Eastern Kentucky University Colonels (0-1).  Despite the two campuses being only 30 minutes away, this is only the fifth time the two teams have faced off.  Kentucky led the series 4-0 coming into today after a thrilling overtime come from behind win two years ago here in Lexington.  This was the inaugural game at the newly named Kroger Field.

UK took the ball on the first possession and went 9 plays for 49 yards before being held to a 39-yard field goal.  Not exactly what Cats fans wanted in an opening drive but a score nonetheless.  Immediately after the first series, running back Benny Snell was escorted to the locker room for x-rays on his ribs.  He would eventually come back into the game for 19 total rushes for 105 yards.  X-rays were negative but Snell commented after the game that “That was the worst pain I had ever felt.”

EKU took over on offense and drove 75 yards down the field seemingly untouched.  EKU Quarterback Tim Boyle found wide receiver, Ryan Markush for a 7 yd. touchdown and with the extra point by Lucas Williams EKU had the lead 7-3.

UK took the ball and began its drive.  QB Stephen Johnson rushed for 34 yards but a targeting penalty on true freshman Lynn Bowden nullified that run and put the ball back on the 28.  The targeting penalty also eliminated the highly touted freshman Bowden for the rest of the competition, a play that Coach Stoops said that he agreed with in the post game press conference.  By this point the UK offense was frustrated and out of sync. Drew Barker led UK on it’s third offensive series of the day.  Coach Stoops said, “We had to get Drew back out there and get his confidence up and get him some snaps.”  Barker’s play still didn’t ignite the Cats and he went 1-2 for the day with only 5 yards and was sacked twice.  Eastern would hold the Cats and eventually take the ball 66 yards to score again and go up by ten, 13-3.

After an EKU punt, Johnson returned at QB with the ball on the UK 25-yard line with 2:26 to play in the half.  Johnson hooked up with WR Charles Walker two straight plays for big gains putting the Cats at the EKU 23-yard line.  On the next play CJ Conrad made the grab in the end zone for the UK touchdown and with the extra point, the Cats trailed 10-13 with 1:28 to play in the first half.

UK began the second half on defense and forced an EKU fumble on the 4 yd. line.  Derrick Baity recovered and UK’s offense took over.  The offense seemingly had it together in the second half but still struggled to score.  Benny Snell came back in with 3 straight carries and no evidence of any pain in his ribs.

EKU’s quick hitter passes worked and the Colonels drove down for a 31-yard field goal with 3:43 to play in the 3rd.  EKU took the lead 16-10 but this would be the last time the Colonels would score on the day.

UK’s offense started clicking and the Cats went 3 plays for 75 yards in 1:11 to score the TD and went on top 17-16.  In the next series, Stephen Johnson scored on a 21 yard run, a play where he was only inches of going out of bounds at about the 12-yard line. That put the cats on top 24-16 with just over ten minutes to play.  UK would tack on a field goal after that but EKU didn’t manage any offense the rest of the game.

Stephen Jonson finished the game 15-22 with 224 passing yards, 6 rushes for 53 yards, 2 TD and only took 1 sack.  Benny Snell finished with 19 rushes for 103 yards with 1 TD.  Sihiem King rushed for 9 carries and 61 yards.  Blake Bone led the receivers today with 3 catches and 93 yards.  On defense Darius West recorded 11 tackles for the Cats.

Up next, the Cats will travel to Columbia South Carolina next Saturday where they’ll face the South Carolina Gamecocks to open South Eastern Conference play.