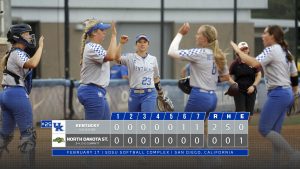 UK wins behind No Hitter – Courtesy of UK Athletics

Her no-hitter combined with a one-hitter from true freshman Grace Baalman in an 11-0 win over Cal State Fullerton capped the weekend for Kentucky with a 4-0 record, thus giving the Wildcats the 2018 Campbell/Cartier Classic championship.

The Wildcats got an unearned run in the sixth inning to take a late lead over the Bison thanks to an error on the third baseman, allowing Erin Rethlake to round third and score. Lauren Johnson, who hit over .700 on the weekend, mashed in an RBI single in the top of the seventh to give Humes a two-run cushion going into the seventh.

In game two, Baalman only allowed one hit to the Cal State Fullerton Titans, which came in the top of the second inning. Other than that, Baalman was nothing short of spectacular, winning the game by throwing just 62 pitches, with 42 recorded as strikes.

UK’s offense was nothing short of sensational, scoring 11 runs on nine hits with two home runs, including from Ashely Ruiz. The sophomore Californian hit her first-career home run on her first-career hit Saturday night over the wall in left field.

Kentucky will take its five-game hitting streak to Orlando next weekend to participate in the 2018 Disney Citrus Classic. The Wildcats start the tournament on Friday against No. 14 Minnesota.

With a runner on first and one out for the Bison in the seventh, Humes got three-hole hitter Bre Beatty to ground into a 5-4-3 double play to end the game.

Lauren Johnson was the key player in the game, driving in an RBI single, her fifth of the weekend, to give Humes a 2-0 lead going into the seventh – a huge insurance run.

In the sixth inning, Erin Rethlake was on second with two outs when Jenny Schaper hit a ball to the left side and the throw from the third baseman threw the ball away to score Rethlake. UK 1, NDSU 0

In the seventh inning, Brooklin Hinz led off the inning with a double and Lauren Johnson brought her home with a clutch two-out hit up the middle. FINAL – #25 Kentucky 2, North Dakota State 0

Two. There were two home runs hit in the game, one by Abbey Cheek and one by Ashley Ruiz – both in the fourth inning. UK has now hit 10 home runs this season.

In the fourth inning, Ashley Ruiz hit her first-career home run to extend the Kentucky lead from 10-0 to 11-0. It was Ruiz’s first-career hit.

Abbey Cheek was the key player in Saturday’s game two win, going 3-for-3 with two singles and a three-run HR. Cheek ended the game with five RBI, tying her career high.

Two runs crossed in the bottom of the first on an RBI single from Cheek who scored Katie Reed and Erin Rethlake. UK 2, CSF 0

One inning later, Katie Reed and Lauren Johnson both had RBI doubles and an additional run scored on an RBI-single from Jenny Schaper. UK 5, CSF 0

In the fourth inning, UK’s offense exploded for six runs on five hits. It all started with two outs. Erin Rethlake, Lauren Johnson and Jenny Schaper all walked to load the bases for Alex Martens. After being intentionally walked earlier in the game, Martens banged through a two-RBI single up the middle to extend UK’s lead to 7-0. The next batter was Cheek, who absolutely crushed a HR over the secondary fencing of the stadium in left field to make it 10-0. Ashley Ruiz then stepped up for a pinch-hit appearance and clubbed her first-career home run over the wall in left center. FINAL – #25 Kentucky 11, Cal State Fullerton 0 (5 innings)