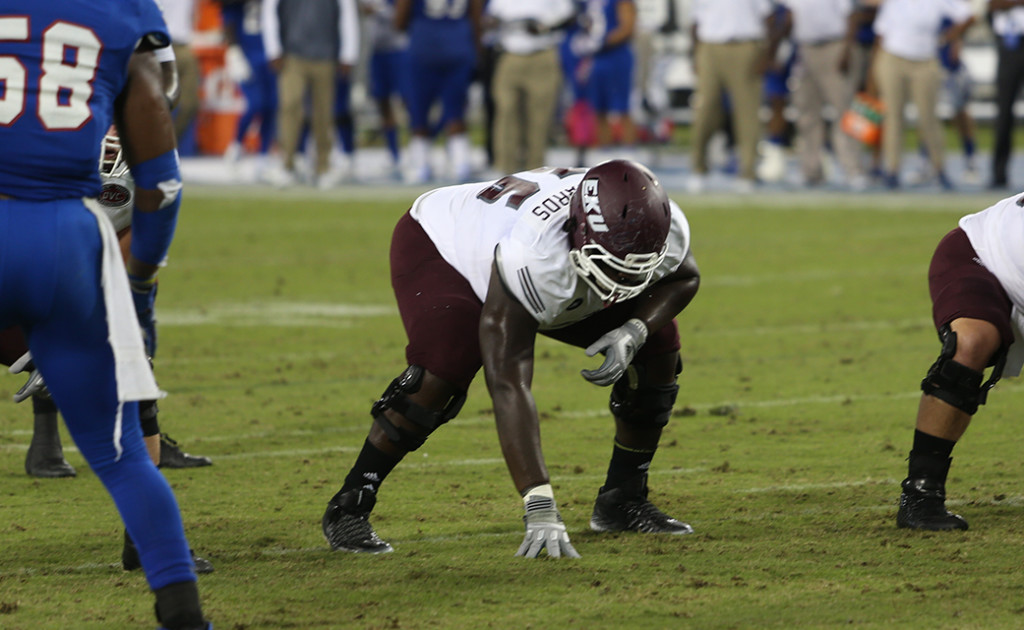 Quarterback Austin Scott was chosen as the Madness Preseason Ohio Valley Conference Freshman of the Year.

Last season, Patrick was a first team All-OVC honoree.  He was also selected to the 2016 Hero Sports Sophomore All-America first team.  The 6-foot-4, 227-pound Dayton, Ohio native was second in the OVC, and 42nd in the nation, with an average of 0.64 sacks per game.  He led the team with seven sacks and 10 tackles for a loss.  Patrick finished eighth in the OVC with an average of 0.91 tackles for a loss per game.

Wrzuszczak was a second team All-OVC selection after last season.  The 5-foot-11, 202-pound Geelong, Victoria, Australia native ranked third in the conference and 17th in the nation in punt average.  He averaged 42.1 yards on 59 punts while placing 28 punts inside the 20 yard line.  The senior had seven punts of 50 or more yards.  Wrzuszczak’s directional skill helped EKU lead the OVC in net punting (41.19 ypp) and punt return defense (2.50 ypp).  The Colonels ranked third and fourth in the nation, respectively, in those two categories.

Markush made an immediate impact in his first season, starting all 11 games.  The 6-foot-2, 183-pound senior from Germantown, Maryland finished second on the team with 41 receptions and second with 556 receiving yards.  He averaged 13.6 yards per reception, which was 14th best in the OVC.  The 6-foot-5, 272-pound Kowalewski started all 11 games at right tackle.  The redshirt junior from Dallas, Georgia helped EKU average 247.6 passing yards per game, third in the OVC and 32nd in the nation.

Edwards, a 6-foot-5, 318-pound, redshirt senior from Webster, Florida, played in all 11 games and made six starts on the offensive line.  In addition to helping EKU average 247.6 passing yards per game, Eastern totaled 500 or more yards of offense four times, including three of his six starts.  Williams finished the season 10-for-16 on field goals and 29-for-29 on extra-point attempts.  The redshirt senior from Russell Springs, Kentucky went 6-for-7 on field goals of 29 or fewer yards.

Glass played in all 11 games and started the final nine games of the season at linebacker.  The 5-foot-10, 216-pound junior from Jacksonville, Florida, was third on the team with 73 tackles and had 5.0 tackles for a loss of 10 yards.  He intercepted two passes and totaled 92 return yards.  Glass tied for 16th in the OVC with an average of 6.6 tackles per game.  Bascom, a 5-foot-9, 178-pound redshirt sophomore from Apopka, Florida, started seven times at nickel back and appeared in all 11 games.  He was sixth on the team with 43 tackles and second on the team with eight pass break-ups.  He registered two sacks for a loss of 14 yards.  Floyd, a 5-foot-11, 176-pound senior, played in all 11 games despite joining the program a week before the season-opener.  The Miami, Florida native made six starts, five at cornerback and one at nickel back.  He led the team with nine pass break-ups and totaled 21 tackles, including 2.5 for a loss.