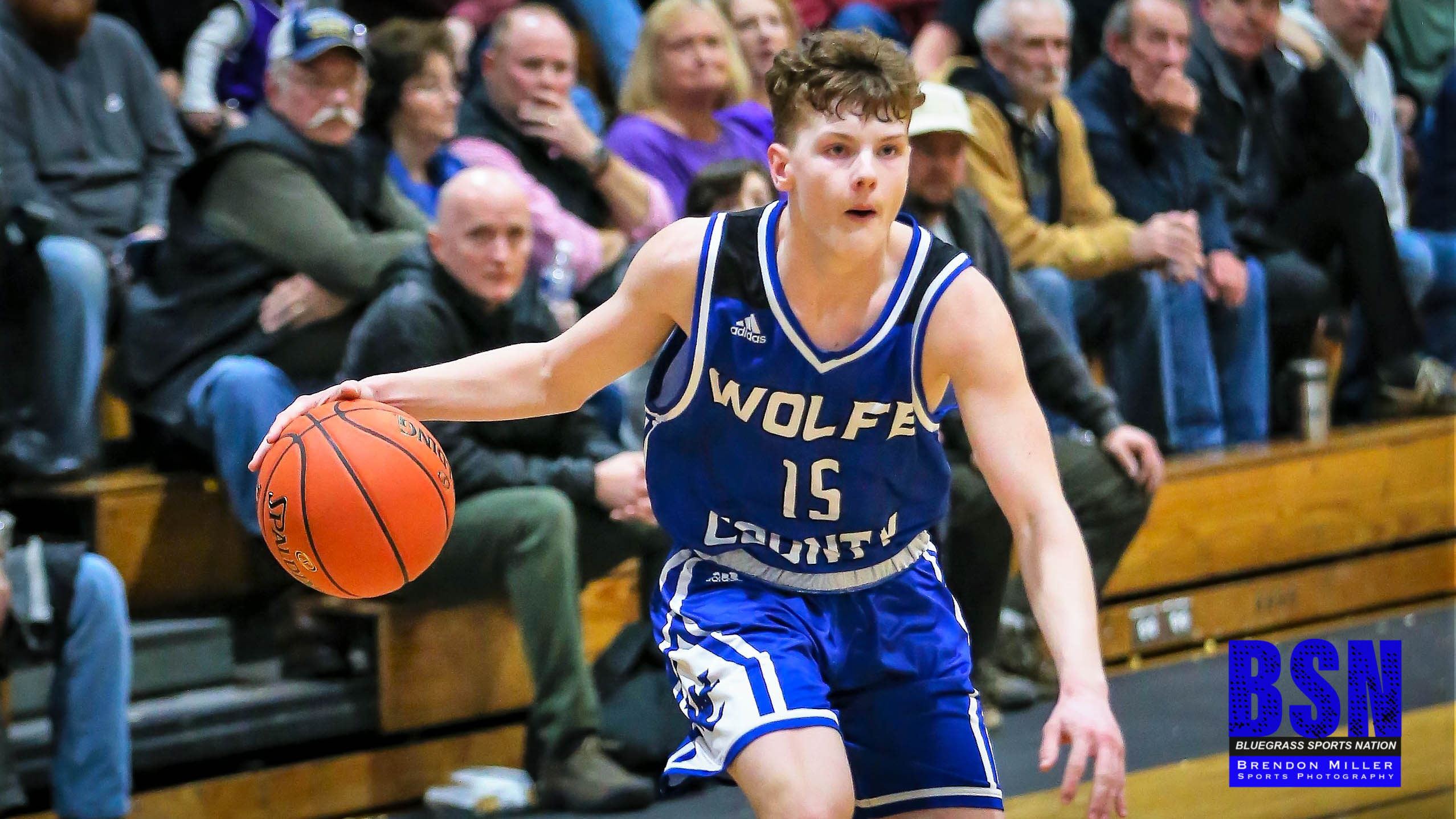 Wilgus Tolson stars with 18 in 2nd half

Wolfe County punched their ticket to the 14th Region Championship game by clawing their way past Knott Central in Sunday’s first Regional Semi Final. The marquee match up of the 20-9 Wolves (RPI of .53915) under 2020 KABC 14th Region Coach of the Year, Robert Scott Creech, and the 18-10 Patriots (RPI of .57049) lead by 4-time 14th Region Champion B.B. King, promised to be a great one.

Wolfe started the game strong behind the shooting of Sophomore Sawyer Thompson and inside presence of 8th Grader Skylar Ritchie. Thompson hit two threes and had eight in the Quarter while Ritchie had two baskets in the paint for four. Patriots Junior Colby Napier pumped in eight in the quarter to pace Knott, as Wolfe led at the 1st break, 20-13. A major development was the 2nd foul on Wilgus Tolson at the end of the Quarter.

Knott made adjustment in the 2nd Quarter and hit their offensive stride as Napier was spectacular adding nine for his halftime total of 17. Scott Shepherd added five as the Patriots out scored the Wolves 20-8 in the Quarter. Hunter Brewer held Wolfe close with five with Tolson and Thompson both on the bench with 2 fouls. Knott led 33-38 at the half.

Wolfe began the 2nd half intent on defending Napier and making the other Patriots provide the scoring. Kent Damron had seven on a three and two baskets. Wilgus Tolson began the 2nd half with purpose slashing and driving for nine in the 3rd Quarter. Thompson added five as the Wolves put up 24 to 15 for the Patriots’ to lead headed to the 4th 52-48.

Wilgus Tolson and Thompson again controlled the 4th Quarter as Tolson had nine of his team-high 20, and Thompson had six of his 19 down the stretch. Elijah Tolson added a timely three. Kent Damron had nine for the Patriots for his game-high total of 21. In the end, Wolfe put the game away by double-digits 74-64 and celebrated on the Morton Combs Athletic Complex floor.

Wolfe will now face the third team in their Murder’s Row as they will take on Hazard in the 14th Region Championship Game with tip set for 7:00 PM on Tuesday Night and you can watch the LIVE Facebook Webcast on BSN with Brendon Miller, John Noble and Ty Back on the call.

Few if any, have had to face Perry Central, Knott Central and Hazard in a single Regional Tournament.