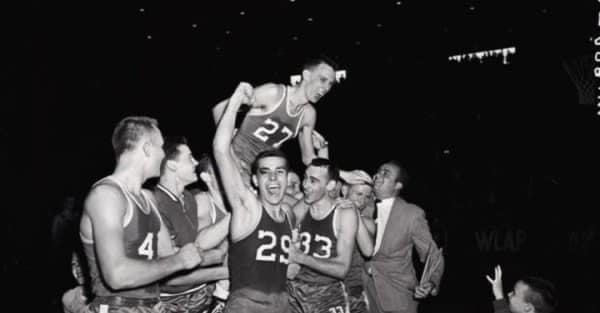 In 1956 Carr Creek won the state championship by defeating Henderson 72-68, and the games and season was filled with close games. What many people are not aware of is the mountains were full of great teams and players in the 50’s and early 60’s.

Some went on to play in the NBA and make a living playing basketball. My cousin, Freddy Maggard won the State Title game on a last second shot from the top of the key. Many know this, but most do not know that the play was designed to go inside to Bobby Shepherd. As the play broke down, the ball was in Freddy’s hands as the clock ticked down.

Bobby Shepherd was a tree trunk of a young man having transferred to Carr Creek that summer from Kingdom Come. The Carr Creek players all helped pack his belongings in Manis Halcomb’s coal truck and bring him to Cody. Stories are told of his legendary natural strength as he would lift 100 lb sacks of corn with one hand in a sitting position as easy as a can of pop. After he graduated, Adolph Rupp brought him to Lexington to play basketball, but some of the football players convinced him to play football having never even seen a game or participated in one.

In the magical year of 1956, Carr Creek dueled Wayland and King Kelly twice in the regular season as Wayland won by two points at Wayland, and Carr Creek won by one at Carr Creek. The two teams, just 25 miles apart, would meet in the Semi-Finals of the State Tournament.

In that epic State Tournament Semi-Final game, Carr Creek won by one point (68-67) on a tip-in by Maggard with four seconds to go. It was an era of mountain basketball of retold stories and nostalgia. Players were bigger than life that will live on in the minds of people like myself forever.