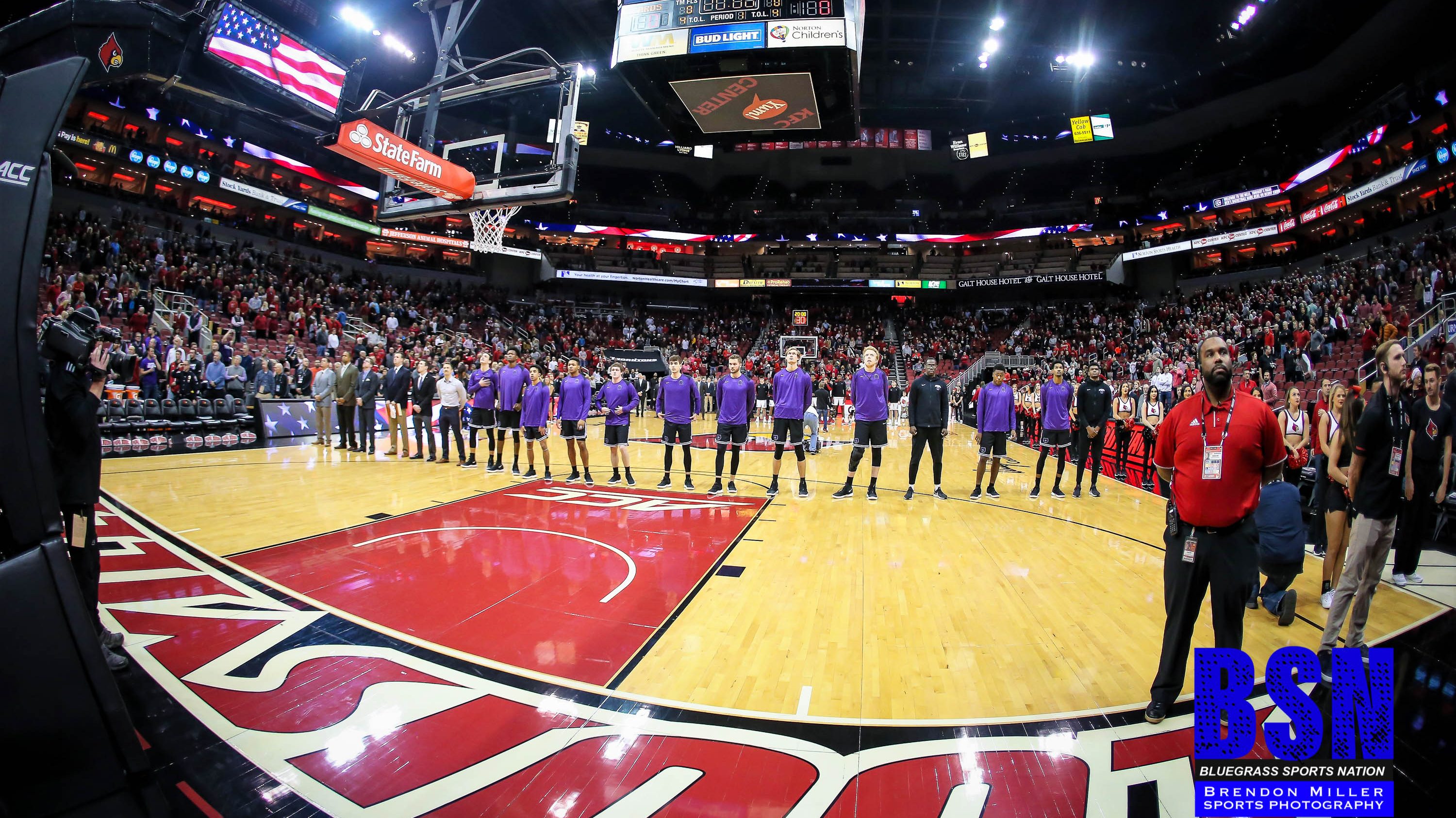 LOUISVILLE, Ky. – All 20 of the University of Louisville’s Atlantic Coast Conference men’s basketball games will be televised by national or regional networks as noted in the announcement of the conference schedule on Thursday.

Louisville’s sixth season in the 15-team ACC and the league’s first with a 20-game schedule includes two games each against Clemson, Florida State, Georgia Tech, Miami, Pittsburgh and Virginia.

UofL opens its season on Nov. 5 with an ACC game at Miami, the earliest opening game ever for the Cardinals and the first time since 1981 they have played a conference opponent to open the season.  The opener will be televised on the ACC Network, the new 24/7 national platform that launched on August 22.  Fans can go to www.GetACCN.com to see if their provider is currently scheduled to carry the ACC Network. If a provider is not listed, fans are encouraged to contact them and request the ACCN.

The Cardinals will play their first ACC home game in the KFC Yum! Center against Pittsburgh on Dec. 6, a matchup also televised by the ACC Network.  After completing the non-conference portion of its schedule in December, Louisville will open the new year with a pair of conference home games against Florida State on Jan. 4 (ESPN or ESPN2) and Miami on Jan. 7 (ESPN or ESPN2 or ESPNU or ACCN).

UofL returns to the KFC Yum! Center for a pair of home games against Georgia Tech on Jan. 22 and Clemson on Jan. 25, both of which will be televised on regional sports networks.  The Cardinals next two will be on the road at Boston College on Jan. 29 (ACCN) and at NC State on Feb. 1 (ESPN/ESPN2/ESPNU).

The Cardinals will have consecutive home games against Syracuse on Feb. 19 (ESPN/ESPN2/ESPNU) and North Carolina on Feb. 22 (ESPN/ESPN2/ESPNU).  Louisville makes its only appearance of the season on ESPN’s Big Monday on Feb. 24 at Florida State.

Virginia Tech provides the opposition for the final home game of the season on March 1 (ACCN) before the Cardinals close the regular season against Virginia for the fifth time in the last six years, facing the Cavaliers in Charlottesville, Va., on March 7 (ESPN/ESPN2/ESPNU). The 2019 ACC Tournament will be staged March 10-14 at the Greensboro Coliseum in Greensboro, N.C.

Louisville has faced a schedule among the top 16 toughest by the ratings percentage index in 10 of the past 12 seasons, including the nation’s fourth-toughest last year by the NET ratings.

Over its 31-game schedule this season excluding an exhibition game in October, UofL will play 11 games on Saturday, eight on Wednesday, five on Tuesday, four on Sunday, two on Friday and one on Monday. UofL will play one game over a 16-day period in late December and early January. The Cardinals had previously announced the non-conference portion of their schedule on Aug. 8.

Specific television assignments for those games listed with multiple networks will be selected throughout the season as the games approach.  Tipoff times and television designations for the balance of the non-conference schedule will be announced later.

Last season, Louisville achieved a 20-14 record and participated in its 39th NCAA Tournament.  Picked in the preseason to finish 11th in the ACC, UofL attained a 10-8 conference record and earned a tie for sixth in the final regular season standings.  The Cardinals will return six of their top seven scorers from last year and welcome a top 10 recruiting class.

The Cardinals have been ranked among the nation’s top teams in multiple early rankings by national outlets, including the following:  No. 2 by Jon Rothstein, CBS Sports; No. 3 by Jeff Goodman, Stadium; No. 4 by Gary Parrish, CBSSports.com; No. 4 by Jeremy Woo, Sports Illustrated; No. 5 by Jeff Borzello, ESPN.com; No. 5 by Seth Davis, The Athletic; No. 6 by Rob Dauster, NBCSports.com; No. 6 by Mike Rutherford, SB Nation; No. 6 by Kyle Kensing, Athlon Sports; No. 8 by David Kenyon, Bleacher Report; and No. 11 by Mike DeCourcy, The Sporting News.

Louisville has received an NCAA Public Recognition Award six of the last seven years for ranking among the top 10 percent in men’s basketball in the Academic Progress Rate (APR), which measures academic eligibility, retention and graduation for student-athletes. Louisville is one of just nine Division I schools in the nation, including only two from Power Five conferences (Louisville and Stanford), which have earned the APR recognition in at least six of the last seven years.

The schedule may be viewed online here https://gocards.com/schedule.aspx?path=mbball.