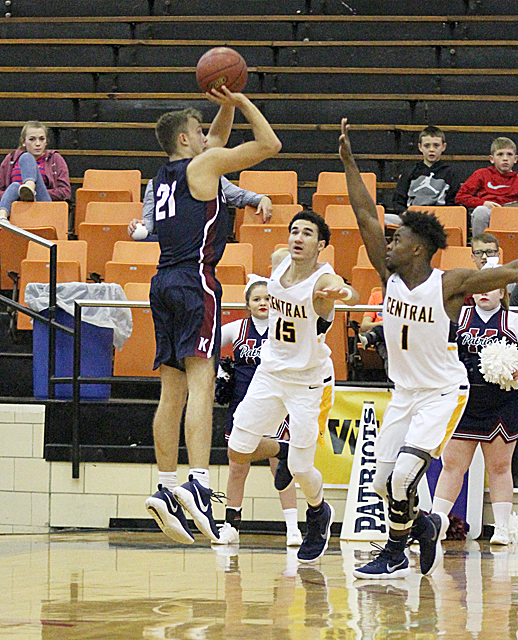 The WYMT Mountain Classic continued tonight, with two semi- final games of the Boys Bracket.  In the first game of the night Knox County Central from the 13th Region took on the Knott County Central Patriots on Knott County’s home court.  Knox County has been perceived as the favorite to not only win the classic, but also one of the favorites in the 13th Region.  Knott County can never be counted out and are a perineal favorite in the 14th Region.  Coach B.B. King has had a lot of success as the head coach of the Knott Central Patriots having won five out of the last seven 14th Regional Basketball Championships, and Knott County Central won the Mountain Classic in 2012.  The fans on both sides expected a great game and the anticipation the game brought before the tip is unmatched other than the Region.

Knox County sensed the Patriots of Knott County had the momentum and puts the game out of reach in the fourth quarter, eliminating any chance of a Knott Central comeback.  Knox Central scores the first nine points of the quarter and quickly develops a twenty- point lead 59-39, 5:49 remains in the quarter.  During this run Knox Central #11 Turner provides another one hand dunk in transition, again treating the spectators to an incredible basketball play.   Knott County Central gets on the board with 5:15 left in the quarter and the lead is cut to eighteen points.  Knott Central goes on an unanswered run and the Knox lead is cut to fourteen points with 3:11 remaining in the game.  Knox Central 63- Knott 49.  Knox Central answers and the teams trade baskets to finish the quarter.  During one of the last plays of the game Knox County’s #11 Turner provides another crowd pleasing dunk, his third of the night.  The first two dunks were impressive, but this one was special.  Turner has the ball in his hands, bringing up the ball from the half court, drives to the goal, makes several Patriot defenders miss and finishes the play with the dunk, dunking over a Patriot defender.  Knox Central defeats Knott County Central 74-57, and advances to the Championship game of the WYMT Mountain Classic.

Clay County has a difficult time scoring the ball in the second quarter, and Floyd County Central gets hot from behind ARC.  Clay County scores two points on the opening possession of the quarter and increases the lead to four points with 7:30 remaining in the half 14-10.  On Floyds Central next possession J.R. Tackett makes a three- point basket, reducing the lead to one point.  Floyd Central is able to get the ball up the court and push the ball into transition.  #33 Kyle Isaac continues his impressive shooting, connecting on two more three- point attempts.  Floyd Central is now leading by eight points 23- 15 with 3:09 remaining in the half.  Floyd Central finishes the half on an 8-0 run and leads by seventeen points at intermission.  Floyd County Central 32- Clay County 15.

Floyd Central advances to the Championship game of the WYMT Mountain Classic.  Floyd Central takes on the Knox County Central Panthers on Saturday, December, 9th, 2017 @ 8:30 pm.  Clay County falls to the consolation game of the bracket and will battle the Knott County Central Patriots for third place in the Boys bracket on Saturday, December, 9th, 2017 @ 5pm.