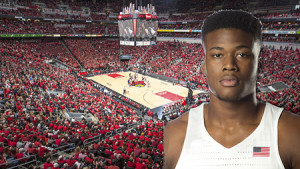 LOUISVILLE, Ky. – Steven Enoch, a 6-10, 250-pound forward from Norwalk, Conn., who has played the last two seasons at the University of Connecticut, has transferred to the University of Louisville to play for the Cardinals’ men’s basketball team.

Enoch, who signed a university financial aid agreement this week, will sit out the 2017-18 season before having two seasons to play with the Cardinals.

“When we worked out Steven, we came away extremely impressed with his offensive skills,” said UofL Coach Rick Pitino.  “He has good size with terrific potential.  It will be great to have him training with us for a year before he joins a great class with him becoming eligible the following year.”

Enoch averaged 3.4 points, 2.3 rebounds and 12.1 minutes in 29 games last season for UConn, starting three games for the Huskies.  He scored a career-high 15 points against USF as a sophomore, making all six of his shots from the field.  He totaled career-bests with four blocked shots and seven rebounds against North Florida, adding seven points in the game.

Enoch played in 27 games as a freshman, totaling 44 points and 40 rebounds for the season.  He scored a season-high six points on three occasions and pulled down a season-best six rebounds against Tulane.

After his freshman year at UConn, Enoch played for the Armenian National Team in the July 2016 FIBA U20 Division B European Championships in Chalkida, Greece.  He led his team averaging 17.3 points, 15.2 rebounds and 2.2 blocked shots as Armenia posted a 3-3 record in the event.

Before his time at UConn, Enoch was named the 2014-15 Gatorade Connecticut Boys Basketball Player of the Year as a senior at St. Thomas More in Uncasville, Conn., where he averaged 15.0 points and 11.0 rebounds in helping his team post a 29-9 record and reach the semifinals of the Class AAA New England Prep School Athletic Council.  He earned second team All-NEPSAC honors and was ranked No. 44 nationally by Scout.com and No. 56 by Rivals.com.

Enoch scored 15 points and grabbed nine rebounds in a 2015 Jordan Brand Classic Regional Game, playing with UofL guard Donovan Mitchell, who was the MVP for their team in the event.  Enoch played his first three years of high school at Norwalk (Conn.) High School, where he averaged 14.4 points, 11.4 rebounds and 3.4 blocked shots as a junior before moving to St. Thomas More for his senior year.  His first two years at Norwalk were on the junior varsity squad before he continued to develop.