A Decade of Great Moments: NASCAR’s Top Series Wrote History on the Daytona Beach-Road Course from 1949-58 Before Moving to 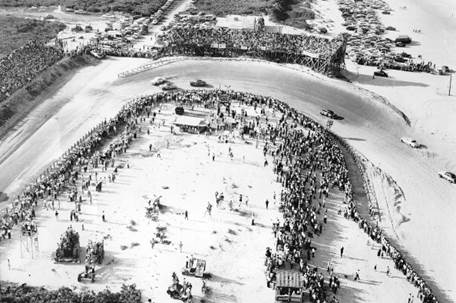 An aerial view of cars negotiating the north turn of the Daytona beach-road course during a mid-1950s NASCAR Cup race. After turning off the beach portion of the track, the cars would then head down the paved portion of the track that was public Highway A1A. (Photo by ISC Images & Archives via Getty Images)

From 1936 through the middle of 1949, smaller, older modified stock cars had competed on the sands of Daytona Beach, but it was in 1949 that Bill France’s dream of having a series, featuring new, full-size sedans that could be purchased off a showroom floor, became a reality.

After introducing his “Strictly Stock” Series (later known as “Grand National” and today the “NASCAR Cup Series”) concept for an initial race in Charlotte in June of ’49, the second event on the slate was at the Daytona beach-road course. It would become a mainstay in the foundation of the sport for the next decade, and many of its winners would read like a “Who’s Who” of NASCAR legends.

During this time period, Big Bill saw that the days of racing on the beach-road course were numbered due to the spreading land usage of a rapidly growing population and huge race crowds. He put a plan for the future of Daytona Beach in motion with a proposal to construct a permanent speedway facility that would become Daytona International Speedway, which hosted the first DAYTONA 500 in 1959.

July 10, 1949
Red Byron of Atlanta took the lead from Gober Sosebee with six laps remaining and went on to win the 166-mile NASCAR Strictly Stock (changed name to Grand National in 1950) race.

Sosebee, who had taken the lead from Joe Littlejohn just after the drop of the green flag, appeared headed for the $2,000 victory but his Oldsmobile bobbled as he negotiated the North Turn on the 34th lap of the 49-lap contest. Byron would go on and win the championship.

February 5, 1950
Harold Kite, a former Army tank driver who began racing on the short tracks after World War II, drove past Red Byron on the 25th lap (of 48) to score a convincing triumph in the season opener over Byron.

Competing in his first NASCAR “Grand National” event, the East Point, GA, driver pushed his Lincoln around the sandy course at a record speed of 89.894 mph to win by 53 seconds.

Flock’s pit crew had an issue fueling his machine during a routine pit stop after leading the first 27 laps, but was able to recover to finish second. His brother, Fonty Flock, was third, followed by Bill Blair and Buck Baker.

February 10, 1952
For the second straight year, Marshall Teague, in his Fabulous Hudson Hornet, kicked off the season with a victory, outrunning his teammate, Herb Thomas, to win the 151.7-mile race at an average speed of 85.162 mph.

The race started late to allow an unexpected crowd of 20,000 spectators to find parking spots. With a delayed start, the 200-mile race (48 laps) was cut short to 37 laps due to an incoming tide.

Blair, in an Oldsmobile, led on the last lap, taking advantage of Flock, who ran out of gas as he took the white flag. His teammate Slick Smith helped push his car to the pits for fuel. Because NASCAR rules permitted a car to be assisted to the pit area, but not to be pushed from the pits, Flock rebounded to finish second.

February 21, 1954
Lee Petty was declared the winner after apparent winner, Tim Flock, was disqualified because of an altered carburetor. The decision wasn’t popular with Flock, who quit driving NASCAR for the rest of the year.

Petty, who would go on and win the first-ever DAYTONA 500 on the 2.5-mile high-banked facility in 1959, beat Buck Baker by nine seconds.

February 27, 1955
Tim Flock, after being disqualified the previous year, rebounded to win after Fireball Roberts was disqualified for push rods in his engine being altered.

Flock was teaming with car owner Carl Kiekhaefer for the first time, and the No. 300 Chrysler finished ahead of second-place Lee Petty, who was the beneficiary of Flock’s misfortune a year before. It was Flock’s first NASCAR race since the Daytona beach-road course event in 1954.

February 26, 1956
For the second time in the event’s history, the Daytona beach-road course race was called short of its scheduled finish – two laps shy – because of a high tide. For the second consecutive year, Tim Flock took the victory.

He led all but three laps in the 37-lap, 151.7-mile event and held off Billy Myers with Ralph Moody third.

February 17, 1957
Cotton Owners picked up his first Grand National Series victory, piloting a Pontiac to the win over Johnny Beauchamp. Owens and Paul Goldsmith battled for the lead, but with eight laps to go, the engine in Goldsmith’s Chevrolet blew.

February 23, 1958
A year after a blown motor with eight laps left took away a possible victory, Goldsmith outdueled Curtis Tuner to win the final race on the Dayton beach-road course. It marked the closest finish in the 10-year history of the event, winning by a mere five car lengths.

Just how Goldsmith accomplished the feat will be covered in the next installment of this series.

Fast forward to 2020! A limited number of fans will get the opportunity to see NASCAR’s return to road course racing in Daytona for the Go Bowling 235 At The DAYTONA Road Course, along with the NASCAR Gander RV & Outdoors Truck Series race on Sunday, Aug. 16. Fans can get tickets, which start at $49 (both races included) for adults and $10 for kids 12 years old and younger, by visiting www.daytonainternationalspeedway.com or calling 1-800-PIT-SHOP.