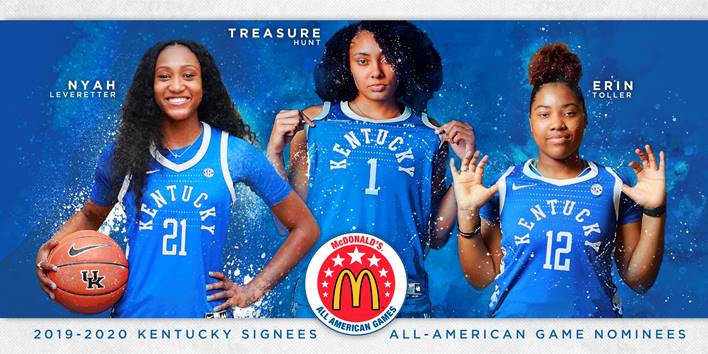 LEXINGTON, Ky. – The future is bright for the Kentucky women’s basketball program as all three members of its 2020 signing class – Treasure Hunt, Nyah Leveretter and Erin Toller – have been named McDonald’s All-American Game nominees, while Hunt was named to the 2020 Naismith High School Girls Trophy Midseason Team.

The annual McDonald’s All-American Game will take place April 1 at the Toyota Center in Houston. The game will be televised on ESPN2 and official team rosters will be finalized in the coming weeks.

Hunt, Leveretter and Toller all three signed National Letters of Intent to play at Kentucky back in November and will enroll this summer. The three signees make up a top-10 recruiting class in the nation according to ESPN.com.

Leveretter is a strong, tall, athletic forward that is the perfect frontcourt prospect for Kentucky. The Blythewood, South Carolina, native is a four-star prospect according to ProspectsNation.com and ESPN.com, which ranks her as the 20th best forward in the class. Last year, Leveretter was named to the South Carolina Basketball Coaches Association AAAA All-State Team after averaging 11.9 points, 9.8 rebounds and 1.9 blocks per game. The forward scored over 350 points as a junior hitting 44 percent from the field, including 13 3-pointers and 68 percent from the free-throw line leading Westwood High School to the AAAA State Tournament Final Four each of the last two seasons. So far in her senior season, Leveretter is averaging 14.5 points and 11.4 rebounds per game and recently scored her 1,000th career point.

Toller is a talented point guard who is a floor general at the position and can score in a variety of ways. ESPN.com evaluated Toller as a “crafty floor-leader with a scorer’s mentality.’ As a freshman at Sacred Heart, she saw significant time averaging 8.5 points per game with 1.1 assists per game and 1.3 steals per game. The Louisville, Kentucky, native hit 38 3-pointers as a freshman and went 42-for-57 from the free-throw line for 74 percent. Toller played for Kentucky Premier 17 and won two game MVP honors at the Battle of the Bridges Tournament before missing most of her sophomore and all of her junior years of basketball with knee injuries. She was averaging 10.2 points and 4.3 rebounds per game before sustaining the injury her sophomore season. Toller is having a great senior season on the court, averaging a team-best 15.9 points and 5.4 rebounds per game hitting 42.3 percent from 3 and 42.7 percent from the field overall.