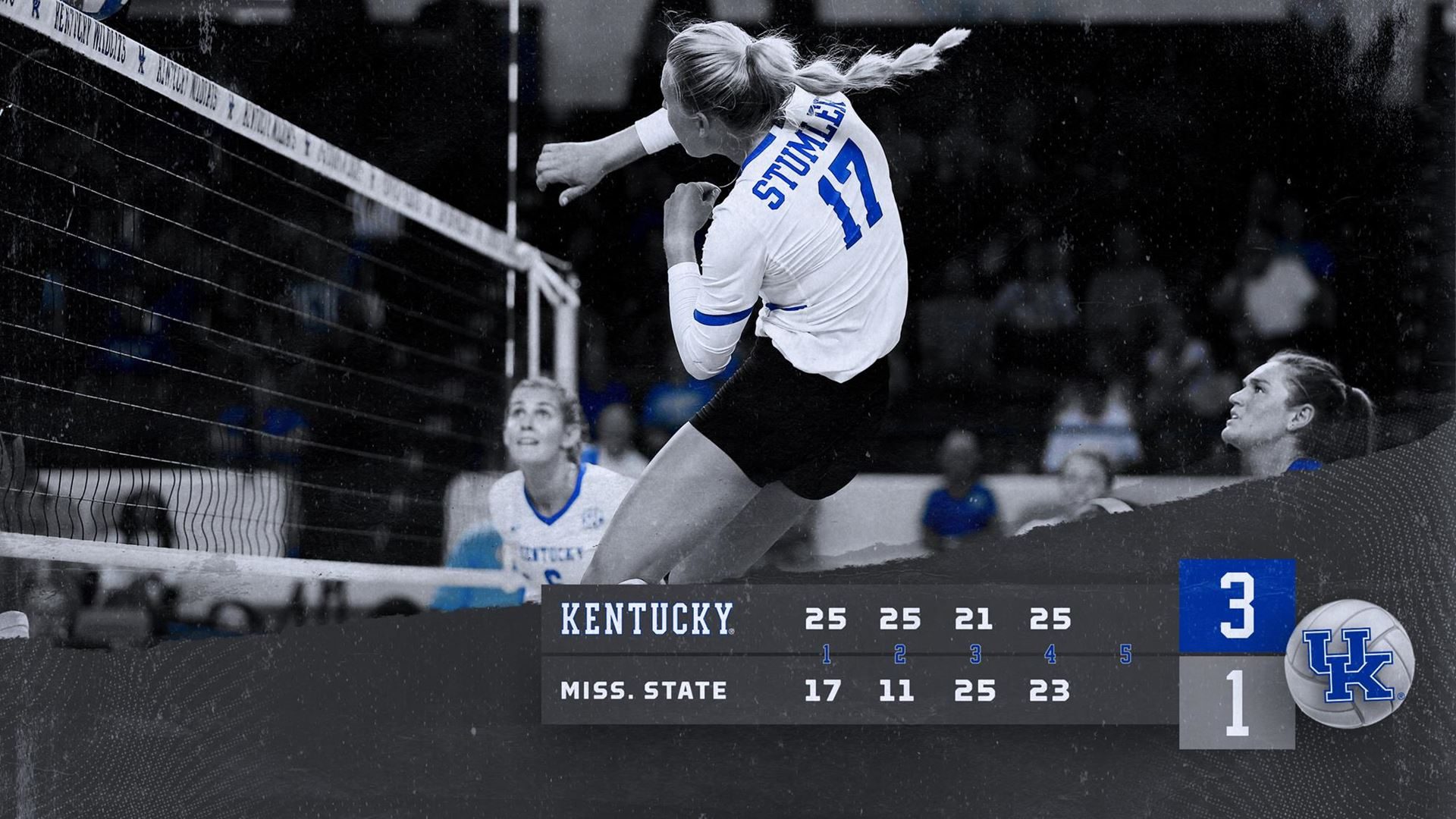 LEXINGTON, Ky. – The No. 16 Kentucky Volleyball team’s stellar offense led by a career-high 20 kills from sophomore Alli Stumler was enough to roll past the Mississippi State Bulldogs with a 3-1 win at home in Memorial Coliseum on Friday Night.

With the win, Kentucky improves to 8-4 on the season and extends its Southeastern Conference winning streak to 26 matches dating back to October of 2017.

“Hats off to Mississippi State,” head coach Craig Skinner said. “They are very athletic, very well-coached and they do some things that are hard to prepare for. We had to sustain some level of concentration when Leah (Edmond) went out and had to step up in other areas.”

In the middle stages of the opening set, senior outside hitter Leah Edmond went down with a left leg injury. She was kept out of the remainder of the match for precautionary purposes. Before her fall, Edmond had three kills in the match and tied Lisa Bokovoy (1985-88) for second place all-time at Kentucky in career kills in UK history with 1,657. Edmond is now only behind Molly Dresibach, who has the record at 1,737.

“(Leah Edmond) is good. It’s a lower-left leg injury,” Skinner said after the match. “We held her out tonight and we’ll evaluate her tomorrow. We could have used her tonight if we needed too, but obviously this is a situation where you want to be cautious before aggressive.”

Defensively, junior Gabby Curry added 16 digs in the match, with 10 of the 16 digs coming in the first set alone. The 10 digs for Curry in the first set tied her season high for most digs in a set, which was against Southern California.

Madison Lilley was the only player in the match to record a double-double, contributing 43 assists and 11 digs to the Wildcats’ cause. Lilley dictated the pace of the offense beautifully all night, overcoming Edmond’s injury to distribute the ball to over seven different players who had at least three kills in the match.

Kentucky will travel to Columbia, Missouri to take on No. 19 Missouri Tigers at 3 p.m. this Sunday. The game will be televised on ESPNU, ESPN3 and the ESPN app.

Kentucky quickly went on an 8-0 run and their dominating offensive forced Mississippi State to take a timeout with the stanza sitting at 13-5. Coming of the timeout, Kentucky’s momentum did not slow down causing the Bulldogs to take another timeout with the set standing at 20-12. Kendyl Paris and Stumler led all players with four kills and UK held the Bulldogs to a .079 attacking percentage. The Cats won the frame 25-17 off a kill by Stumler.

Kentucky came out firing on all cylinders taking a quick 7-4 leading causing Mississippi State to halt play early in the set. The timeout didn’t slow the Cats down as their attacking offense lead them to a 7-0 run in the middle of the stanza, including two aces from Gabby Curry and two kills from Stumler. Paris completely dominated the set with an attacking percentage of .600. UK closed the set 25-11 on a kill by Skinner and an error by Mississippi State.

UK came out slow to start the set, taking a timeout with MSU in the lead at 10-6. The timeout seemed to be just what the Cats needed as they came back on a 4-0 scoring run including an ace by Caitlyn Cooper and a pair of kills Stumler and Leah Meyer. Kentucky continued to fight back in the set, but it just wasn’t enough as Mississippi State took set three 25-21.

Stumler continued to add her new career high in kills during the fourth set as Kentucky went on an early 4-0 run to take a quick 10-5lead.Kentucky’s offense forced Mississippi State to take timeout late in the frame with the score at 23-18.The Wildcats and Bulldogs traded points in this set, however Kentucky held on to the lead to take the win 25-23 off a kill by Meyer and Skinner and won the match 3-1.