As Good as Advertised: Top-Ranked Bama Rolls to 63-3 Win over CATS 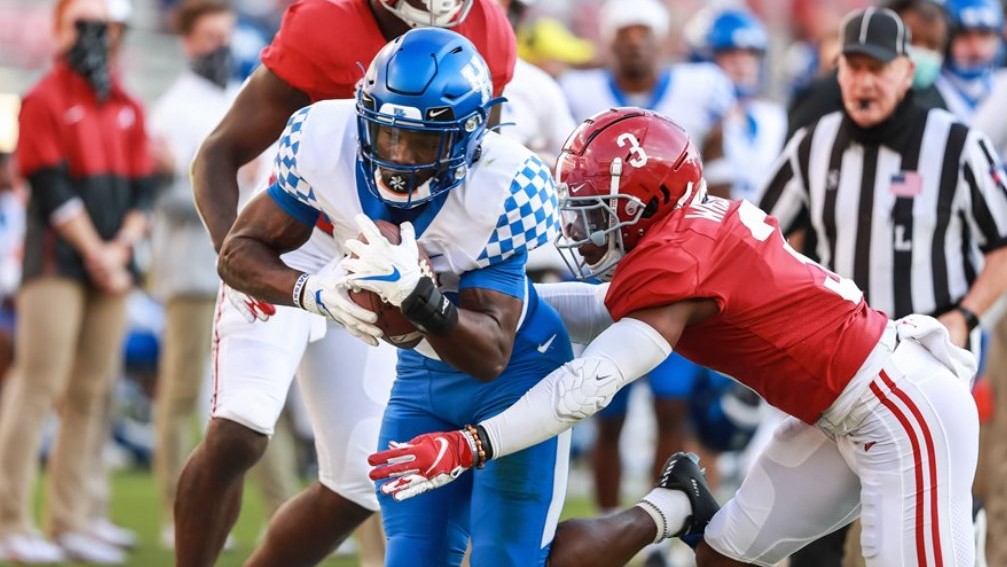 Kentucky coach Mark Stoops knew the odds were stacked against his team going into Saturday’s contest at top-ranked Alabama. The final outcome isn’t what Stoops expected even with a depleted roster.

The Wildcats (3-5) were without 10 players because of injuries and COVID-19 tracing, including offensive playmakers Chris Rodriguez (running back) and Justin Rigg (tight end), along with defensive standout Jamin Davis in a 63-3 loss to the Crimson Tide at Bryant-Denny Stadium.

“This is not the team (to play against) or a place that you want to come to down some guys (and that’s not an excuse),” Stoops said. “… I don’t like (losing by that margin). It’s not a good look and something where we want to be and we’re over that. You have to give them credit. That’s an explosive team and it (is) what it is. I don’t like it and I don’t think anybody does and to accept that kind of score.”

Although shorthanded, Kentucky trailed 7-3 early and outgained Alabama 121-79 in the first quarter. However, a botched field goal attempt and another field goal miss in the second quarter prevented the Kentucky offense from getting into any kind of rhythm and the Crimson Tide capitalized.

“You know you’re going to be in a tough environment at the start and I thought we did some good things early,” Stoops said. “The mistakes. … you can’t do that against a team like (Alabama). We had an opportunity to at least (make the score) 7-6 and instead, we snap it, lose 40 yards and give them great field position. That’s a big momentum killer for your team and it kind of deflates you (and) you can’t make those kinds of mistakes.”

Alabama scored 42 points in the middle two quarters and punched in two more scores in the final quarter for the final margin. It was an outcome Kentucky’s players frowned upon despite the pre-game circumstances that left Stoops and his staff in a bind less than 24 hours before kickoff.

“We have to get better,” Kentucky defensive lineman Josh Paschal said. “This isn’t acceptable and this isn’t a part of our culture, this is not who we are. …. nobody likes losing and getting blown out at the end of the day. This is not acceptable for us. We know that as players and as a whole football team and a whole organization.”

Stoops said Alabama was true to the tape.

“They are everything that you think they are when you see them in person,” he said. “They can play physical, they have big strong backs with a physical offensive line and they’re explosive getting the ball down the field. Their receivers catch everything that’s remotely close to them and they’re a very good team.”

Following the first quarter, the Wildcats managed just 58 yards and played three quarterbacks, including backup Joey Gatewood and freshman Beau Allen but failed to find the right mix as the game progressed. After a promising start, Kentucky produced just 27 yards in the final two quarters.

“We just came out flat (in the second half),” Kentucky running back AJ Rose said. “I don’t think we were as hungry as we were in the first half. They came out and they scored and got that advantage on us. We just went flat and died and you can’t play catchup in this league. It was just unfortunate.”