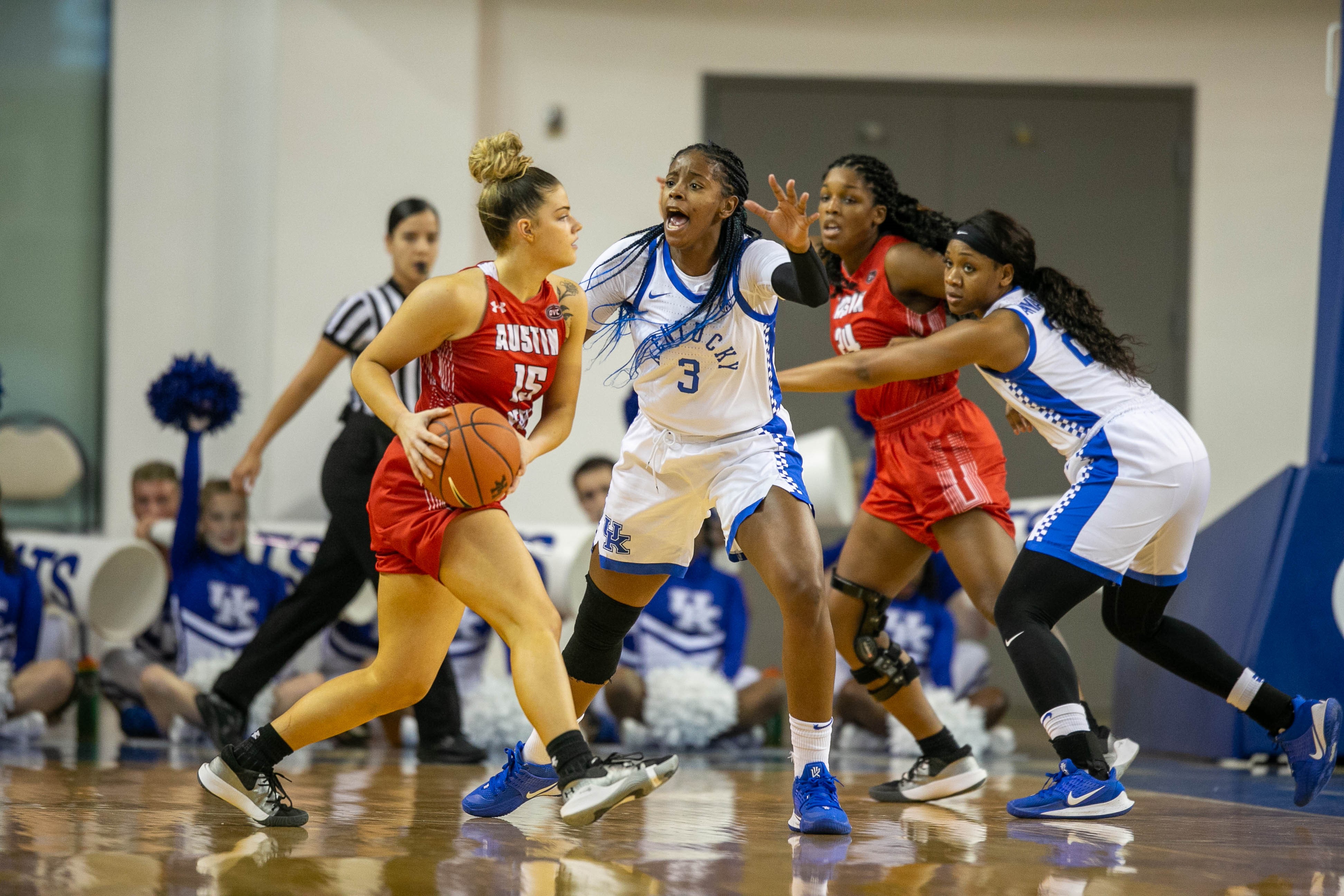 Sophomore Rhyne Howard led all scorers with 14 points, while junior KeKe McKinney scored a season-high 12 points for the Cats. Ogechi Anyagaligbo, Sabrina Haines and Jaida Roper each had 10 points for Kentucky. Haines also tied a career high with nine rebounds. It was the first time since Dec. 18, 2018 against Western Carolina that the Cats had five players in double figures in scoring.

Amanda Paschal had seven points, nine rebounds and six assists as the Cats won their seventh straight game to start the season. Blair Green had eight points for the Cats while Nae Nae Cole had a season-high seven.

Kentucky hit 34 of its 60 shots (56.7 percent) from the floor, while Austin Peay connected on just 21 of its 64 attempts (32.8 percent) from the field. The Cats forced 22 Lady Gov turnovers and scored 22 points off those miscues.

Kentucky took the lead on its opening possession as McKinney converted a basket and a free throw to give the Cats a 3-0 lead. After an Austin Peay basket, Kentucky scored the next seven points to lead 11-2 and force a Lady Govs’ timeout. After Austin Peay got a three-pointer from Maggie Knowles, the Cats scored five straight to lead 16-5.

The Cats would eventually lead 22-10 on a jumper by Howard. But Austin Peay closed the first period on a 7-2 run, cutting Kentucky’s lead to 24-17 after 10 minutes of action.

Kentucky scored the first seven points of the second period, and assembled an 18-2 run to stretch the lead to 42-19. Eight different Wildcats would score in the period as Kentucky outscored Austin Peay 21-6 to take a 45-23 lead into the break. Haines and McKinney each had eight points in the first half to lead all scorers. Kentucky scored 16 points off of Austin Peay’s 15 first-half turnovers.

In the third period, the teams started in opposite directions. While Kentucky made three of its first four shots from the field, Austin Peay missed its first five shots, as the Cats extended its lead to 52-23. Austin Peay hit back-to-back threes to cut the lead to 52-30, but a pair of McKinney layups extended the advantage to 56-30. Kentucky would lead 61-33 after three periods.

Kentucky would extend the lead to as many as 35 in the fourth period before settling for the 29-point victory.

Kentucky returns to action on Wednesday, hosting Charlotte at Memorial Coliseum. Tipoff is set for 11 a.m. and the game can be seen on SEC Network Plus.