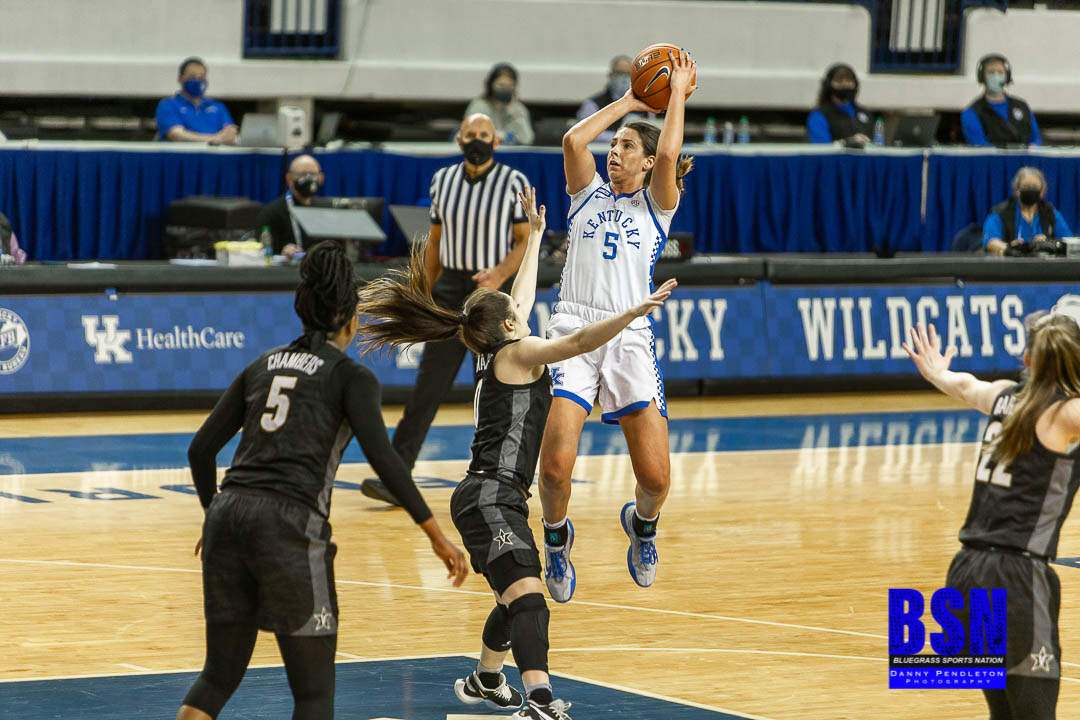 Kentucky (10-3, 3-2 SEC) was without five players in the game, including All-American Rhyne Howard, who missed the game with an ankle injury.

Green, the Harlan County (Ky.) native, hit seven of 10 from the field, including four of five from behind the arc, and four of six at the line for her 22 points. She added five rebounds, two steals and an assist in the game.

Kentucky had four other players in double figures in the contest. Senior Chasity Patterson had a big all-around game with 16 points, seven assists and seven rebounds. Dre’una Edwards had 16 points and eight rebounds for the Cats, while senior KeKe McKinney had 11 points. Freshman Treasure Hunt had 11 points and five rebounds for Kentucky.

Vanderbilt jumped out to an early 4-0 lead before Kentucky got on the board. The Cats responded with eight in a row, including threes from Hunt and McKinney, to grab an 8-4 advantage. After a Vanderbilt free throw, Kentucky ran off seven in a row, making it a 13-1 run, and taking a 15-5 lead with 5:24 to play in the first.

Kentucky would stretch the lead on a three from Green, taking a 20-9 lead with 4:17 left in the first. Vanderbilt would score the next three before Green struck again, her second three of the period, to extend the lead back to 23-12. The Cats would lead 23-13 after one period of play.

The Cats extended their lead early in the second quarter, scoring the first six points on a three from McKinney and a layup and free throw from Hunt, taking a 29-13 lead in the process. But Vanderbilt would answer with seven points in a row to cut the UK lead to 29-20 with 8:01 left in the period.

The Cats got the first points on the second half on a Patterson layup, but Vanderbilt would score the next four to grab the lead, 41-40, with 8:15 left in the third. Kentucky answered with a Hunt layup and a Patterson steal and basket to lead 44-41. Vandy’s Chelsie Hall would tied the game at 44 apiece before Green hit another three, giving UK a 47-44 advantage with 7:11 to play in the third.

Vanderbilt got a layup and free throw from Hall to tie the game at 47-47, then the Commodores took the lead, 49-47, on a Yaubryon Chambers layup with 6:08 left in the third. The lead would change hands again four more times before the end of the period but the Commodores scored the six in a row late and would lead 59-58 after three periods.

As the fourth quarter got underway, the lead went back and forth between the teams. Kentucky took a 60-59 advantage on a Green layup. After Vanderbilt took the lead back, McKinney nailed a three to give the Cats a 63-61 lead. Vandy would score the next four to grab a 65-63 lead before Edwards tied the game on a layup with 6:58 left in the game.

Vanderbilt then scored four in a row again, on a Hall jumper and a Koi Love basket, taking a 69-65 lead with 5:04 to play. Kentucky answered with a pair of Edwards free throws, followed by Green three-pointer to lead 70-69. Patterson followed with a driving layup, giving the Cats a 72-69 lead with 2:37 to play. An Edwards layup with 2:02 to play gave UK a 74-69 lead and closed a decisive 9-0 run.

The Commodores would get within three, 74-71, with 1:06 to play but Kentucky hit six free throws in the last minute of the game to seal the victory.

Kentucky returns to action on Thursday, visiting Auburn. The game is set to tip off at 8:30 p.m. ET and can be seen on the SEC Network.