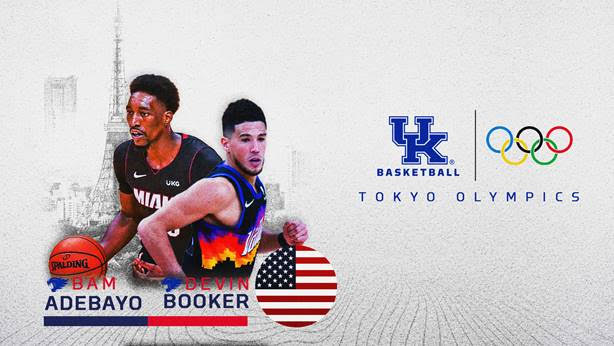 Former Kentucky men’s basketball players Bam Adebayo and Devin Booker will represent the United States at the 2020 Olympics in Japan this summer.

Adebayo and Booker have accepted invites to be a part of the 12-member national team roster that will compete July 25-Aug. 8 at Saitama Super Arena in Saitama, Japan.

The former UK stars will make their debut for the 15-time Olympic gold medalist U.S. national team, which is seeking its fourth straight gold medal at the Games of the XXXII Olympiad. A Wildcat has been a part of the previous three U.S. gold medals with Tayshaun Prince in 2008, Anthony Davis in 2012 and DeMarcus Cousins in 2016.

Only one other college – UCLA with three – has more than one representative on the 2020 U.S. Olympic Team.

In addition to Adebayo and Booker suiting up for Team USA, former Kentucky players Trey Lyles and Mychal Mulder made Canada’s senior national team that will compete in the FIBA Olympic Qualifying Tournament starting Tuesday. The champion of the six-team tournament will earn a spot in this year’s Olympics.

Twelve teams will compete for the gold in Japan, of which seven nations have already clinched a spot for (U.S., Argentina, Australia, France, Iran, Nigeria and Spain). The 12 teams will be divided into three groups (A, B and C) of four teams each. The group stage of the competition is played in a round-robin format, with each team playing all other teams in its group (a total of three games for each team). The teams placed first and second in each group and the two best third-place teams in the group phase qualify for the final phase.

A draw will take place following the conclusion of the group phase to determine the pairings of the quarterfinals. The winners of the groups and the second-place team with the best result from the group phase are placed in one pot (D), while the two remaining second-place teams and two best third-place teams in another pot (E). Teams from the same group in the Group Phase cannot be drawn against each other in the quarterfinals. This stage of the competition is played in a knockout format and the draw will produce an Olympic bracket for the road to the gold medal.

To be crowned Olympic champion, a team has to play six games – three in the group phase and three in the final phase (quarterfinals, semifinals, gold medal game) instead of eight as in past Olympics.

U.S. Olympic men’s basketball teams have medaled in each of the 18 Olympics they have participated in, winning 15 gold medals, one silver and two bronze medals.  Team USA owns a 138-5 overall win-loss record. Since NBA players began representing the U.S. in 1992, Team USA is 53-3 in seven Olympics with six gold medals. The Americans are currently on a 25-game Olympic winning streak.

Adebayo and Booker accepted invites after becoming two of the brightest young superstars in the NBA.

Booker, currently leading the Phoenix Suns in their first NBA Western Conference finals since 2010, is a two-time NBA All-Star and one of the game’s best scorers since debuting in the 2015-16 season. With a 3-1 series edge vs. the Los Angeles Clippers, the Suns are one win away from securing their first NBA Finals berth since 1993.

Appearing in the NBA Playoffs for the first time in his career, Booker is not leaving anything to doubt in his debut run. The Suns dispatched of the 2020 NBA champions, the Los Angeles Lakers, in six games in the first round, and swept the Denver Nuggets to advance to the NBA Western Conference finals. Booker is averaging 27.1 points, 6.9 rebounds and 4.9 assists per game during the playoff run after posting a 40-point triple-double in game one vs. the Clippers.

Booker is nearing 10,000 career points. Just 24 years old, his current point total is the seventh most ever by a player before turning 25.

Booker was the Southeastern Conference Sixth Man of the Year during UK’s magical 2014-15 season. He averaged 10.0 points, 2.0 rebounds and 1.1 assists per game, while also sinking 58 3-pointers. Booker won four straight SEC Freshman of the Week honors and earned a league-high five overall awards. He was drafted 13th overall by the Suns in 2015.

With Booker playing an instrumental role, the Wildcats went 38-1 in his lone season, winning the first 38 games before falling in the Final Four. The 38 victories are tied for the most in NCAA history.

Adebayo, a 2020 NBA All-Star, led the Miami Heat back to the playoffs for a second consecutive season after appearing in the 2020 NBA Finals.

After helping anchor a defense this season that allowed just 10.4 fast-break points and only 41.3 points in the paint per game, both the lowest in the NBA, Adebayo finished fourth in the NBA Defensive Player of the Year voting and was named to the NBA All-Defensive Second Team for a second straight year.

Adebayo was a key part of the 2017 Elite Eight and SEC championship team at Kentucky. In his lone season at UK, he averaged 13.0 points, 8.0 rebounds and 1.5 rebounds with eight double-doubles.

Adebayo was tabbed to the All-SEC Second Team by both the media and the league’s coaches. He was also an All-SEC Freshman Team selection and a member of the SEC All-Tournament Team after helping lead UK to the crown. He was selected 14th overall by the Heat in 2017.

When the 2020-21 season began, a staggering 31 players were on NBA opening-day rosters (including two-way and inactive lists) played and finished their college basketball careers at Kentucky. Underscoring the fact that no other school in the country can match UK’s ability to develop players and put them in the NBA, UK’s 31 players were once again the most of any college basketball program, beating the next-closest school (Duke with 26) by five players.

Kentucky has enjoyed unprecedented success at putting players in the NBA under John Calipari. In the 11 previous seasons of the Calipari era, 41 players have been selected in the NBA Draft, more than any other school. Included in the recent run are 31 first-round picks, three No. 1 overall selections (Davis, Karl-Anthony Towns and John Wall) and 21 lottery selections.

Calipari’s players have entered the league NBA-ready. His players have garnered 23 All-Star selections, with Davis winning the game’s MVP honor in 2017. Derrick Rose was named NBA MVP in 2011. Six of his players have been tabbed All-NBA, three have been named NBA Rookie of the Year, and 15 players from Calipari’s first 11 teams at Kentucky have made the NBA All-Rookie teams.

Calipari and Kentucky have had multiple players selected in the first round of the NBA Draft in 11 straight seasons, the only program since the draft went to two rounds in 1989 to accomplish such a feat. No other school or coach in the country has had a first-round pick in each of the last 11 seasons. Calipari is the only coach in the history of the sport to have four players drafted No. 1 overall (Rose – 2008, Wall – 2010, Davis – 2012, Towns – 2015).