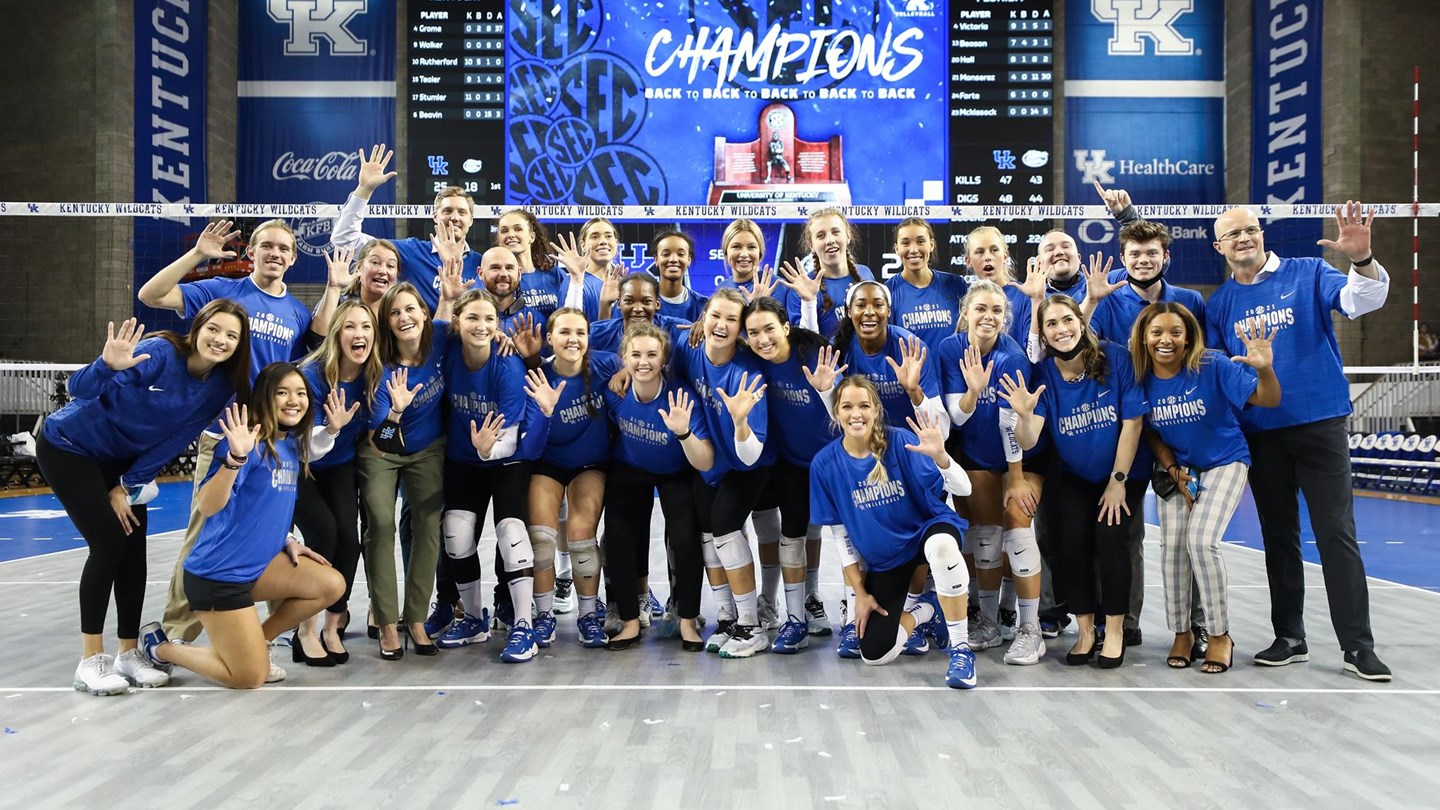 The Kentucky Volleyball team finished the regular season in style Saturday afternoon, sweeping the No. 20 Florida Gators 3-0, (25-18, 25-20, 25-23) to claim an outright SEC championship guided by 15 digs from Eleanor Beavin and nine digs from Riah Walker.

With Saturday’s win, Kentucky clinches an outright title, finishing the season with a 17-1 record in Southeastern Conference play and preventing Mississippi State (16-2) from claiming a share of the crown for the top spot.

The 2021 NCAA Volleyball Selection Show will be broadcasted on ESPNU with the exclusive unveil of the 64-team bracket on Sunday at 8:30 p.m. ET. The top 16 teams in the selection committee’s eyes will host first and second round matches on campus sites next weekend.

UK swept Florida in both matches this weekend, as UK has now won nine-straight sets against the Gators and six of the last seven matches between the SEC’s two heavyweight programs.

Kentucky held Florida to a .224 hitting percentage in the match and under .200 in sets one and two guided by Walker and Beavin’s amazing floor defense all weekend.

Offensively, it was Alli Stumler again leading the way with 11 kills as Saturday she was joined by Reagan Rutherford in double-figures, who had 10 kills on 19 swings with a new career-high three solo blocks.

Kentucky took its first lead of the match at 11-10 on a monster solo block by Reagan Rutherford on the right pin for UK’s first stuff of the afternoon. Kentucky then ran off four of the next five points thanks to kills by Tealer and Stumler to carry a 15-12 lead into the media timeout. After a Bella Bell kill off a slide, Florida called its first timeout trailing by four at 18-14. After the lead for UK shrunk to two on back-to-back attack errors, an Alli Stumler overpass kill coupled with a Madi Skinner kill thwarted UK to a 21-17 lead and Florida called its final timeout. Kentucky closed the set on a 5-1 run thanks to efficient offense by Emma Grome who had 14 assists in the opening set as a Stumler kill closed out a 25-18 first-set win. UK limited Florida to .194 in the first set as no Gator eclipsed five kills and UK outblocked UF, 3.0-2.0.

An Azhani Tealer ace put the screws on a 4-0 Kentucky run in the start of the second set, and trailing 8-5, Florida called its first timeout of the set. UK’s run ballooned to five on a Tealer dig and transition kill by Stumler to make it 9-5 out of the break. Another extended run boosted by Rutherford’s blocks and nice passing by Riah Walker made it 18-13 and a Tealer ace capped off four points in a row for the Wildcats. Bella Bell continued her torrid start to the match with her seventh kill on nine swings to give Kentucky a lead of a half dozen at 21-15 and Florida elected to call its final timeout of the second. UK’s first timeout of the match came three points later as the Gators went on their first run of three or more in the set to close the gap to 21-18. After an extended rally that ended with a Florida kill, Kentucky’s Reagan Rutherford ended the second set with a thunderous kill from the right side and UK took the second set, 25-20.

Kentucky started the third set sloppy, trailing the Gators 13-10 and after Florida went on a 3-0 run, UK was forced into calling its first timeout of the set trailing by a match-high three points. Alli Stumler’s ninth kill of the afternoon pushed Kentucky into the lead at 15-14 and Florida called a timeout trailing by a point and UK having won three in a row into the halt in play. After UK had a three-point lead following a 6-0 run, Florida pushed back with a 3-0 run of its own and tied the set at 18-18. The Wildcats got a termination from Madi Skinner on the left side and an ace from setter Emma Grome to balloon the lead to 22-20 and Florida called its final timeout trailing by a pair. With the match tied, 23-23, a kill by Stumler and an attack error by the Gators closed the match as Kentucky took the series in a sweep, 25-23 as UK celebrated its fifth-straight SEC championship.