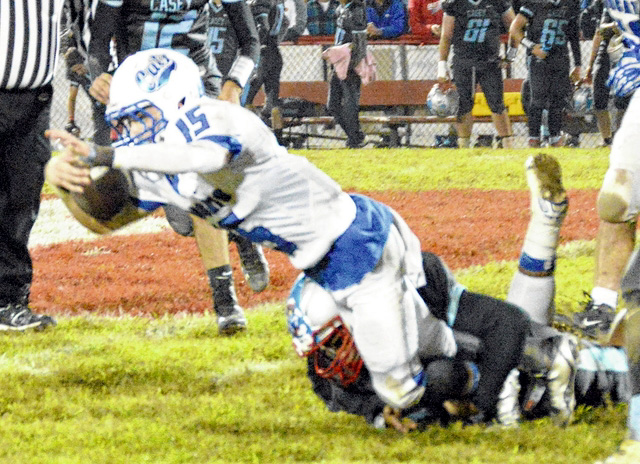 Tanner Asher gets tripped up against Casey County on Friday. He finished the game with 21 yards rushing. – Photo by Anthony Cloud | Daily News

An early 19-point lead for Casey County set the tone for Friday’s game. Bell had trouble stopping the potent Rebel offense en route to a 53-14 defeat. It was the Bobcats third straight loss and the largest of the season.

“I think we didn’t come out ready to play, and they jumped on us,” said Bell coach Amos McCreary. “We just made way too many mistakes and it snowballed. I don’t know how to put it any other way.”

Casey County tallied 465 total offensive yards. Breece Hayes was one of the catalyst that drove the Rebel offense. He went 18-for-28 for 311 yards and three touchdowns. He also tallied 37 yards and two touchdowns on eight carries.

Dalton Summers carried the load on the ground for Casey County with 11 carries for 42 yards and two touchdowns. Dalton Lawrence ran for 45 yards on just two carries.

Collin Miller caused the Bobcat defense problems as he hauled in seven receptions for 189 yards and two touchdowns. Preston Tucker caught four passes for 39 yards and a touchdown.

“When someone can score 53 points on you, there isn’t a whole lot you can do to change that,” said McCreary. “We’re just not making any plays whatsoever. We haven’t had but maybe one interception all year. People are just throwing the ball at will. Up front, we’re not getting any pressure. We’re trying, but it’s just not happening.”

Bell County’s offense was stagnant through the majority of the game. The team ran for 113 yards. Dalton Callebs led the team in rushing with 45 yards on 12 carries. Nathan Collett ran for 28 yards and two touchdowns.

Issac Collett completed three of his passes for 53 yards and a touchdown. Ethan Murray was on the receiving end of the touchdown pass.

Casey County didn’t take long to get on the board again in the second quarter. With 10:41 remaining in the half, Hayes completed a 54-yard pass to Miller for another touchdown to increase the Rebel lead to 19-0.

Bell County got on the board with 5:33 remaining in the half. Issac Collett completed a 7-yard touchdown pass to Murray. The failed two-point attempt cut the lead to 19-6.

Casey County responded quickly. The Rebels capped off a nine-play drive with a 5-yard touchdown run by Hayes with 2:16 remaining in the half. The Nick Wilkerson extra point increased the lead to 26-6.

Casey County would not exit the first half without adding one more touchdown to the board. After forcing Bell to a three-and-out, the Rebels marched down the field in nine plays to score on a 12-yard touchdown pass to Tucker.

The Wilkerson extra point increased the lead to 33-6 heading into halftime.

The Rebels outscored the Bobcats 20-8 in the second half. Bell’s lone touchdown of the half came in the fourth quarter. Nathan Collett capped the five-play drive off with a 7-yard touchdown run with 9:18 remaining in the game.