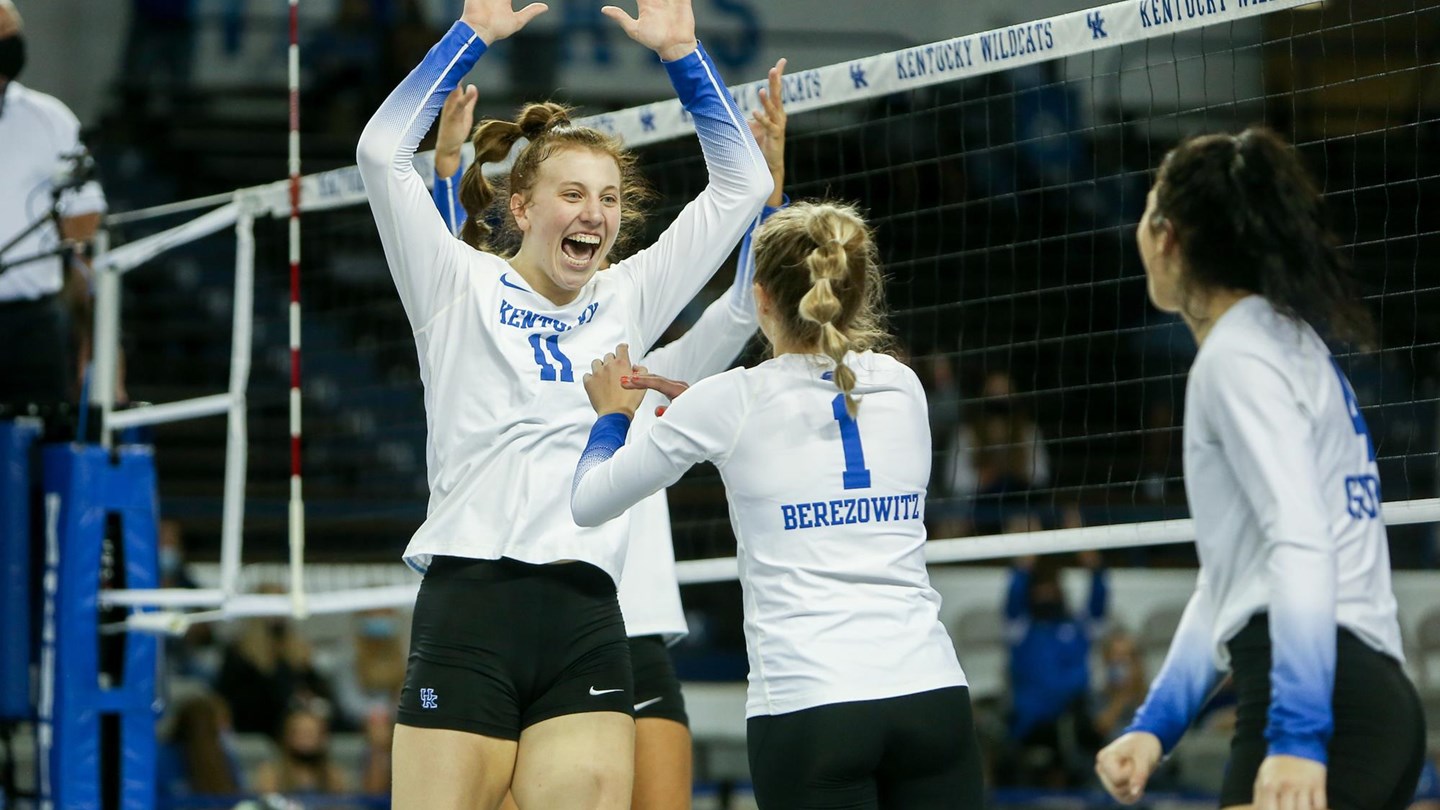 Wildcats get 16 kills to sweep Tigers

With Friday night’s win live on the SEC Network, Kentucky improves to 13-3 on the season and remains the only undefeated team in the Southeastern Conference in league play at 6-0. The LSU Tigers fall to 7-11 on the year and are 3-6 in SEC play.

Bell’s breakout night featured a career-high five blocks, in addition to six kills on nine swings with no errors and a dig. The Blythewood, South Carolina native hit .667 on the night and was one of the key figures in Kentucky’s win over LSU.

Madi Skinner added to her season total of 16 kills in the match with a .324 hitting percentage to go along side five digs, a block and two service aces.

The Wildcats served the Tigers off the floor Friday night, recording nine aces, a new season high. The Tigers were out of system due to the Kentucky serving most of the match and LSU was held to just three aces in the match.

Contrary to Thursday night’s match, Kentucky came out on the front foot, winning six of the first seven points behind the immense digs of Eleanor Beavin and out-of-system terminations by Azhani Tealer and Alli Stumler to make it a 6-1 Kentucky lead out of the gates. A 4-0 Kentucky run made it 11-4 Wildcats on Azhani Tealer’s service run and LSU called its first timeout trailing by seven. Back-to-back kills by Tealer and Madi Skinner made it 18-11 and LSU was forced to call its final timeout. A Madi Skinner over pass termination alongside a powerful kill from Bella Bell made it 23-16 and the Wildcats closed out the opening set, 25-17. Kentucky hit .300 in the set with four kills from Tealer leading the way for the Kentucky offense. Madi Skinner and Bella Bell both had three kills. UK held LSU to .161 hitting with three blocks for the Wildcats and Emma Grome logged 11 assists on 12 Kentucky kills in the opener.

LSU gobbled up the early momentum in the second set, winning six of the first eight points to take a four-point lead early in the frame. The Wildcats were able to slowly work themselves back into the set as they methodically chipped away and tied the set for the first time at 8-8 as the two exchanged points into the media timeout 15-14 with LSU in front. Kentucky took its first lead of the frame at 17-16 on an Alli Stumler kill and after her second kill in a row to reach five in the match, LSU called its first timeout trailing the Wildcats, 19-17. Madi Skinner’s third back-row kill of the set put Kentucky in front by three at 22-19, its largest lead of the set, and LSU called its final timeout. Madi Skinner’s 10th kill of the match gave UK set point at 24-20 and following two LSU points, Kentucky called its final timeout leading 24-22. After LSU cut the lead to 24-23, a kill by Madi Skinner on the left pin ended the set and Kentucky took a 2-0 lead in the match.

Kentucky’s Bella Bell and Sophie Fischer made it 10-6 in the third set out of the gates and after a 5-0 Kentucky run, the Tigers called their first timeout of the set trailing by four and struggling to get out of the rotation. LSU came all the way back to run off five in a row after a successful challenge and Kentucky segment of the match where it struggled to serve receive and it was 11-10 LSU followed by a UK timeout. Kentucky ran the score back its way on a 5-1 run to make it 16-12 before the set of runs continued and LSU made it 16 all. Kentucky’s service numbers were off the charts all night, but Stumler’s second ace of the night made it 20-18 UK and LSU called its final timeout trailing by two. Kentucky won seven of the last eight points to close out the match, 25-19.