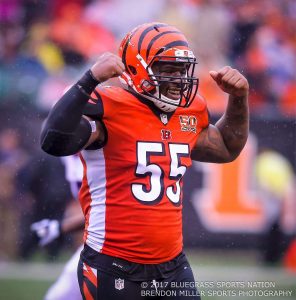 By John Huang
A lot can change in two short weeks. After two disappointing home losses to start the season that had the Cincy fan base ready to jump ship, the Bengals fired their offensive coordinator in hopes of jump starting their stagnant offense. Out with Ken Zampese, in with Bill Lazor. The subsequent offensive resurgence in the narrow road loss to Green Bay (27-24 in OT) followed by the dismantling of the hapless Browns in Cleveland (31-7) last week revived a minimal modicum of faith that the season might still be salvageable.

For starters, Andy Dalton looks like a new man. When I last touched bases with you two weeks into the season, the much-maligned Bengal quarterback had four interceptions and no touchdown passes to his credit. In the past two weeks, he’s passed for six touchdowns with no picks. Now linebacker Vontaze Burfict has also returned from a three-game suspension, restoring some swagger and intimidation into an already solid defensive unit.

Against the Buffalo Bills, the Bengals came out like Super Bowl contenders. An early 77-yard touchdown bomb from Andy Dalton to A.J. Green had the fans hungry for buffalo on this rainy afternoon. Forget the rain—just go deep! Throughout the contest, the Bengals’ passing game continued to show signs of life with Dalton connecting on 22 of 36 passes for 328 yards and a touchdown. Unfortunately, the running game remained on life support. Only Joe Mixon’s five-yard touchdown scamper at the beginning of the fourth quarter provided any semblance of a residual spark. Final Score: Cincinnati 20, Buffalo 16. The Bengals’ defense played admirably throughout, keeping the home team in the game even as it seemed their entire secondary went down with injuries. Burfict led the team with 13 tackles, a sack, and no personal fines or individual penalties.

In the National Football League, reputation means everything. No one has been hurt more from a bad reputation than Vontaze Burfict. The 6th-year linebacker from Arizona State has already had 17 personal foul/unsportsmanlike conduct/roughing the passer calls and nearly a million dollars in fines in his short career. At 6’1” and 255 pounds, he’s a tackling machine, but because of his prior rap sheet, he can’t breathe, burp, or belch anymore without drawing a flag.

Burfict’s illegal preseason hit on Anthony Sherman was borderline questionable, while his recent shove of Browns quarterback Deshone Kizer shouldn’t even have drawn a flag. Compared to Danny Trevathan’s recent helmet-to-helmet disfigurement of Devante Adams, Burfict’s actions appear rather choirboy-like. Such is life under the NFL microscope. From the moment he stepped out of the tunnel, to the end of his post-game shower, every move was scrutinized and every hit dissected ad infinitum. How can anyone play football under those restrictive circumstances?

The answer is you can’t, but I thought I’d try to see what Burfict had to say. Approaching his locker gingerly, I didn’t know if the 27-year-old Pro Bowler would feel compassion for a rookie reporter or simply punch my lights out. “Just gotta have faith, come to work every day, execute,” he said with a scowl. “Next play. You can’t think about the last play that happened. Go on to the next play and keep it rolling…Day by day. You gotta take every day at a time, every play at a time. Come to work every day and everything will pay off.”

With my teeth still intact, I stretched my luck by trying to get Coach Marvin Lewis to expound on his relationship with Burfict. “We don’t have enough time in here for my conversations with Vontaze,” he answered with a snickering guffaw. “Just play.”

Well, as you can see, NFL interviews often don’t go as planned. Nevertheless, I’m having the time of my life trying to navigate effectively while learning the ropes. I hope you’re enjoying the ride. With this win, the Bengals improve to 2-3 and climb right back into the divisional race. Their defense is legit. As long as Burfict stays on the field, I like their chances in the weeks ahead.

“Pittsburgh lost?” Burfict asked. “Hell yeah! That’s good, but we got to worry about what’s going on here. I’m happy they lost though.” Me too. Stay tuned.