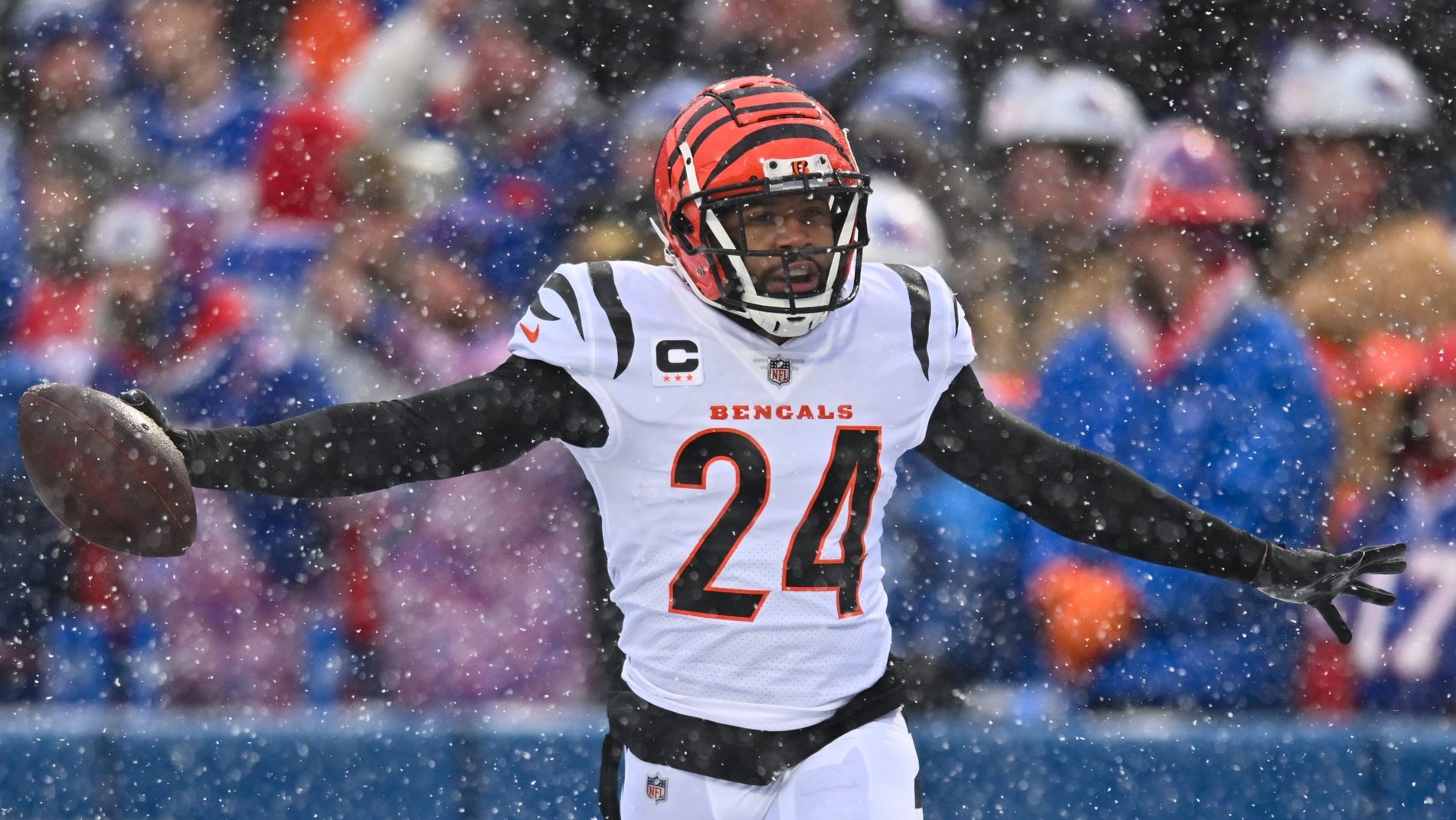 You can call him Joey Frost or you can call him Joey De-Frost, but like Tom Brady and Patrick Mahomes before him, you can call Bengals quarterback Joe Burrow going to back-to-back AFC championship games after he led the Bengals’ 27-10 dismantling of the Bills in front of a hushed capacity crowd at Highmark Stadium in Sunday’s AFC Divisional.

In a game worthy of black-and-white film played for much of the day in a swirling snow they had to room off the yard-lines during breaks, running back Joe Mixon melted  the clock with his first 100-yard day since the first win of this winning streak that is now ten. After Burrow (23 of 36) sifted for 242 yards, Mixon finished off his 105-yard day as the Bengals muscled to a franchise playoff record 413 yards.

The Bengals defense sent that message on the first series of the second half. Down 17-7, the Bills rolled to the Cincinnati 9. But ubiquitous slot cornerback Mike Hilton (all over Western New York Sunday) blew up a run for a two-yard loss and then on third down rookie safety Dax Hill, moved to cornerback with Tre Flowers out, was blanketed on tight end Dawson Knox and Allen overthrew it to force field goal that made it 17-10.

And then the Bengals converted in the red zone after Bills linebacker Shaq Lawson hit Burrow as he threw and Burrow looked to twist his knee on the way down. But Burrow got right back up hit a wide-open Hurst on third-and-ten and as he hurdled to get the first.

Mixon then took control of this game with a jarring 12-play drive behind that-story-of-the day offensive line that took 6:25. On third-and-one, Mixon took a toss behind new left tackle Jackson Carman and bulled for 13 yards in the snow. A few snaps earlier, Mixon banged for another first down on a counter behind new right guard Max Scharping, and then he scored the touchdown on a one-yard run that put them up, 24-10, with 1:17 left in the third quarter.

Then on the Bengals’ on the next series, wide receiver Tee Higgins drew a 32-yard pass interference penalty that put them in the red zone and on third-and-goal the Bengals opted to take time off the clock and take the field goal with Evan McPherson’s 20-yard chipper that made it 27-10 with 11:22 left in the game.

Joey De-Frost warmed up the swirling snow with 18 of 27 passing for 186 yards and two touchdowns to stake the Bengals to a 17-7 lead in a first half the Bengals dominated on both sides of the ball. Their revamped offensive line didn’t blink, silencing the Bills faithful with back-to-back opening touchdown drives for a 14-0 lead on the way to 274 yards by halftime that was supplemented by Mixon’s 55 yards on nine carries.

Burrow sizzled on those drives, de-icing his first snow game by hitting his first nine passes to six different receivers for 105 yards and those two TDs. He found tight end Hayden Hurst (four catches for 46 yards in the ) and Chase (three for 42) for wide open touchdowns.

Meanwhile, the defense extended its streak to 12 straight games without allowing a touchdown in the first quarter and held Allen to just 111 yards on 11 of 17 passing.

Chase took over the red zone in the last two minutes. On third and four from the Bills 14, Chase, single covered by cornerback Tre’Davious White, stood up at the line and caught it and whirled for eight yards   Then came the new offensive line’s only mistake in the first mistake in the first half when on third down left tackle Jackson Carman false started.

Then, it looked like Chase caught a 10-yard touchdown with 1:52 left when Burrow dropped it over linebacker Matt Milano and safety Jordan Poyer. But the touchdown was overturned when it was ruled Milano got his hand on the ball just as they were about hit the ground to unsecure it momentarily and Evan McPherson kicked the 28-yard field goal to make it 17-7.

And the Bengals defense again had the answer to force a punt, helped by Bengals edge Trey Hendrickson drawing left tackle Dion Dawkins’ second holding call of the day and that prevented Allen from doing a double because the Bills got the ball to open the second half.

It was a brisk six-play opener, started by a seven-yard zip to Chase and  finished off by Burrow avoiding  pressure and running up in the pocket to flip a 28-yard touchdown pass to a wide open Chase as Burrow passed Kenny Anderson as the Bengals all-time postseason leader.

Then on the Bills’ first series of the game, edger Joseph Ossai lined up inside Hendrickson on third down, beat the interior and forced Allen to overthrow Diggs.

On the next Bengals’ series the re-built offensive line showed itself when right tackle Hakeem Adeniji pulled and buried cornerback Taron Johnson on Mixon’s 16-yard gain. A sack got wiped out by defensive end Boogie Basham’s offsides. After Millano beat a six-man line (D’Ante Smith was the extra tackle) to stop the rampaging Mixon (36 yards on his first four carries) for a two-yard loss, Burrow came back on the next snap to hit Hurst wide-open working the right sideline for a 15-yard touchdown play and there was silence with the Bengals up, 14-0,after having the ball for 9:35 compared to the Bills’ 1:38

Then Hendrickson beat Dawkins and hit Allen on third down as he was throwing for their second straight three-and-out.

The Bills offense went hurry up and it helped as the Bengals left Allen off the hook twice in the Bills’ first scoring drive. Strong safety Vonn Bell put Allen in a second-and-13 with a sack, but he got 16 right back when he hit Diggs in a zone. Then after a holding call, Allen pump faked left and hit wide open wide receiver Khalil Shakir for 23 yards to set up his third-down quarterback sneak to make it 14-7 with 7:25 left in the half.