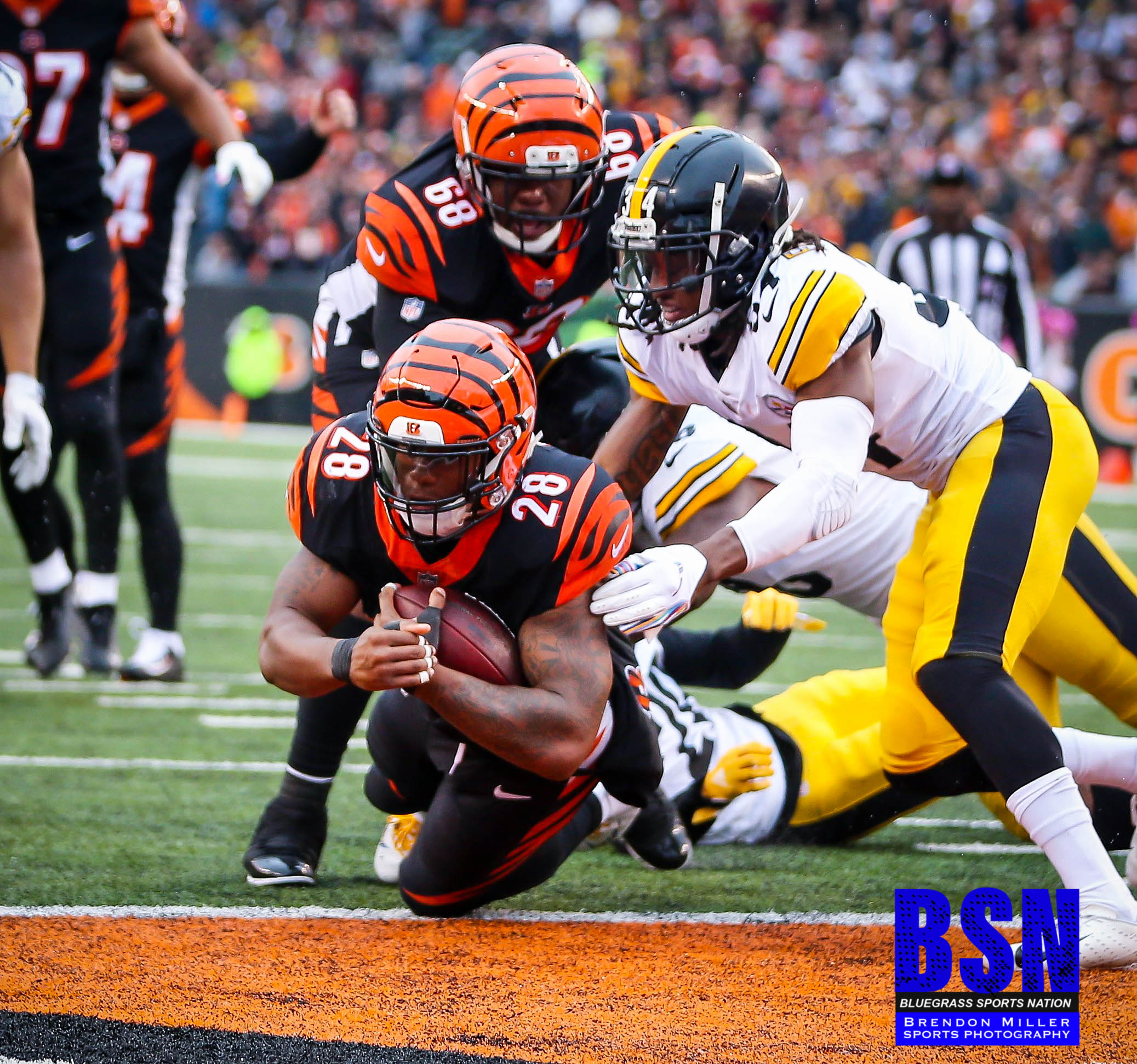 (CINCINNATI, Oh.) – For the Cincinnati Bengals, playing the Pittsburgh Steelers has been likened to a recurring nightmare. To say that the series has been one-sided is probably a bit of an understatement. When you lose the last 7 in a row, 10 out of the last 11, or 15 of the last 18—and when your head coach is 8-25, including 2-16 at Paul Brown Stadium with a pair of embarrassingly freakish playoff losses—the word domination seems much more appropriate.

On a misty, dreary Sunday afternoon, the horrific dreams continued as Pittsburgh’s Ben Roethlisberger connected with Antonio Brown on a 31-yard TD pass with ten seconds left in the game for another unfathomable 28-21 Steeler victory. Whether heart-stopping or heart-breaking, the loss drops the Bengals season record to 4-2, and leaves their legion of long-suffering fans wondering what they did to deserve such prolonged misery.

“It’s frustrating to lose games at home, particularly division games,” Bengals head coach Marvin Lewis said when asked about any personal frustration he feels losing time and time again to their hated rivals. “We lost this one today. We just got to rebound back. We don’t get a chance to whine about it or whatever. We gotta get ready to go…It’s unfortunate we lost the game today, but we got another one in Kansas City come Sunday night.”

There were no 24-point fourth-quarter comebacks needed in this one as Cincinnati clawed its way back from only a six-point deficit late in the game. When Joe Mixon plowed into the endzone from four yards out with a mere 1:18 left on the clock, visions of a streak-busting celebration appeared briefly on the fog-shrouded horizon. According to the well-known script, however, we all knew it wasn’t to be. Big Ben, when left with too much time to throw and too much time on the clock, will ultimately deliver the dagger that pops all your party balloons.

For the afternoon, Andy Dalton completed 26/42 passes for 229 yards and 2 TDs. Tyler Boyd continued his breakout season with 7 receptions for 62 yards and 2 TDs. Joe Mixon led the team in rushing with 64 yards on 11 carries and a touchdown. The Cincinnati defense, which won the game against Miami last week, gave up 481 total yards and couldn’t make the crucial stop when it needed to.

In sports—even on the professional level—the mental aspects of the game frequently play a huge role. A smart opponent will try to get into your head, looking for the possibility of gaining any slight advantage. I daresay the Steelers, for the past decade, had successfully burrowed into the Bengals’ brains—leaving them gasping game after game as if hexed, cursed, and jinxed by the terrible towel waving hordes from Steeler Nation.

How else could you explain the Monday Night meltdown from last year, when the Bengals blew a 17-0 lead? Or what about in 2015, when the Bengals were poised to post their first post-season victory in twenty-five years, only to fumble and bumble their way to an embarrassing 18-16 loss? Rewind another decade, and thoughts of Kimo von Oelhoffen’s season-ending hit on Carson Palmer only adds to the harrowing narrative of anybody old enough to remember.

My hope was that the ignorance of youth would be the key to the success of this year’s Bengals—that they’d be too young for historical scars to affect their psyches. After all, thirty-five of the players on this year’s fifty-three-man Bengals roster are younger than 25. Nineteen of them are in their first or second season. Thus far this campaign, some of the biggest plays have been from the Bengals’ kiddie corps, especially on defense. Clayton Fejedelem, Sam Hubbard, Jessie Bates, Nick Vigil, Carl Lawson, and Jordan Willis have all contributed one way or another to the Bengals’ wins. Unfortunately, they may now just be another generation of players who continue to lose to Pittsburgh—a footnote in the record books for consecutive losses and decades of pain.

And so it goes.

Dr. John Huang covers the Cincinnati Bengals for Bluegrass Sports Nation. He’s currently working with former LEX18 sportscaster Alan Cutler on his new book. If you enjoy his writing, you can read more at www.huangswhinings.com or follow him on Twitter @KYHuangs.