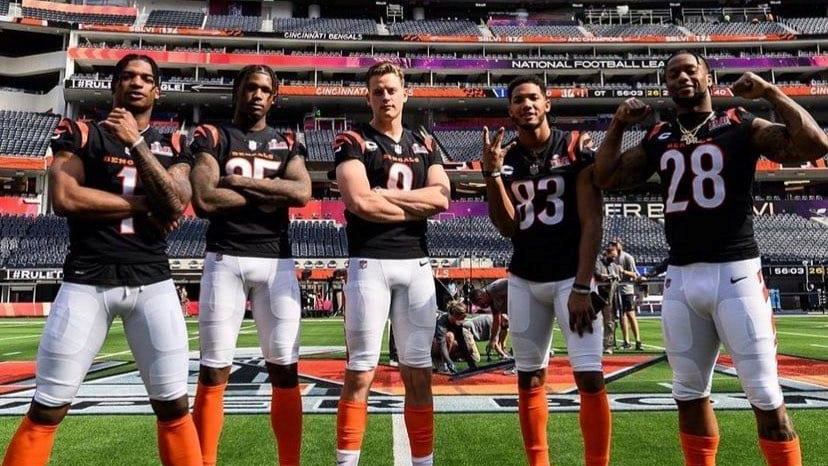 The Cincinnati Bengals closed out their week of Super Bowl preparation with a brief walkthrough at Drake Stadium on Saturday morning, followed by a trip to Inglewood for team photos at SoFi Stadium.

For about 40 minutes, the team reviewed special teams and held some non-contact team periods, with players dressed in T-shirts and shorts.

“Just our final wrap-up, nothing major,” Coach Zac Taylor said as he quickly walked off the field. “Just part of our routine.”

Taylor added that there are no changes to players’ game statuses; C.J. Uzomah was listed as questionable to play, but Taylor said Friday that he expects the tight end to play in Super Bowl LVI.

The team elevated defensive tackle Mike Daniels and receiver Trent Taylor from the practice squad for the game.

For the past two weeks, the Bengals have refined and reviewed their game plan against the Los Angeles Rams, first at the University of Cincinnati and then on the campus of UCLA. With their hotel in Los Angeles only a 5-minute walk from their practice field, the Bengals have maintained a pre-game schedule that nearly mirrors their routine ahead of regular-season games.

After the morning walkthrough, the team boarded buses to head south to SoFi, where they dressed in their black jerseys and white pants for team photos. The group sat in the first row of the stands above a digital banner that read “#RULETHEJUNGLE.” Taylor and team owner Mike Brown sat at the center of the first row and were flanked by the coordinators, receiver Ja’Marr Chase and quarterback Joe Burrow.

Players and coaches scattered on the field for smaller group photos, soaking in the moment and the view beneath SoFi’s grand Infinity screen while weaving around grounds crew members who were painting the NFL shield and Super Bowl LVI logos at center field.

The Bengals were scheduled to have some down time Saturday afternoon before wrapping it up with 7:30 p.m. meetings.

“Guys are locked in and ready to go,” Taylor said.