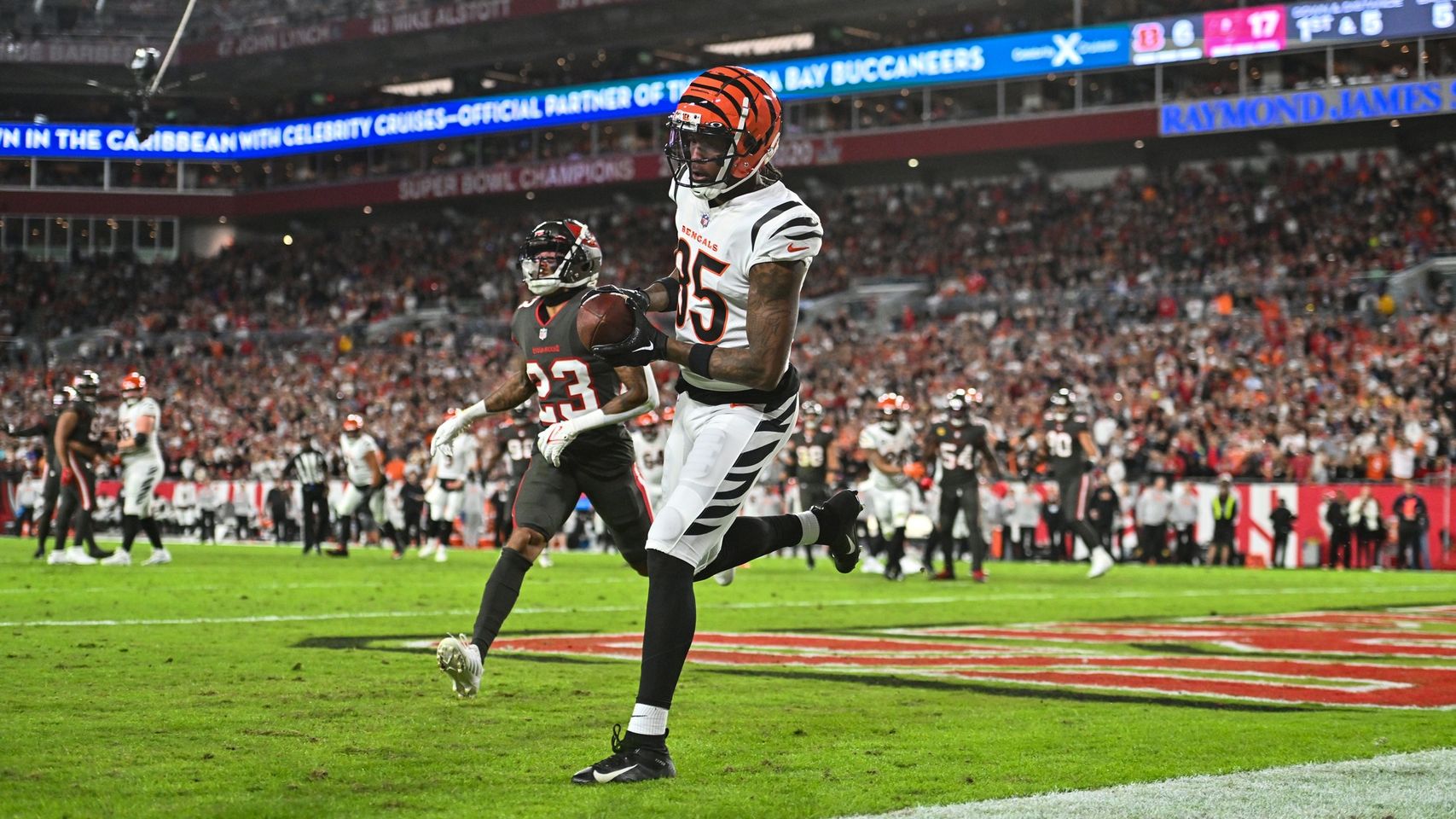 Down 17-0 to The GOAT, the Bulldog Bengals scored the next 34 points and took sole possession of first place in the AFC North by a game with a 34-23 victory over Tom Brady’s Buccaneers at Raymond James Stadium.

The Bengals’ signature suffocating second half defense ripped off four straight turnovers, blanketing Brady after halftime while quarterback Joe Burrow won his first summit with Brady by pitching a touchdown pass to each of the Big Three receivers in Tee Higgins, Tyler Boyd and Ja’Marr Chase. He added a fourth to hometown hero Mitchell Wilcox at the end of a grueling 6:52 scoring drive on a 14-yard flip with 2:21 left to secure Cincinnati’s sixth straight victory, as chants of “Who Dey” rained down from the traveling Bengals faithful.

The fourth turnover, tying for the most against a Brady team, came with the Bengals up 10 early in the fourth. Edge Joseph Ossai drilled Brady as he was throwing, it popped up in the air and linebacker Germaine Pratt plucked it off the turf.

The defense did it without their top two sackers in the second half. Trey Hendrickson was inactive with a wrist injury, while Sam Hubbard left early in the second quarter after injuring his left calf. Also early in the fourth quarter, rookie cornerback Cam Taylor-Britt went down and fellow newcomer Allan George, up from the practice squad, was suddenly in his second NFL game.

Brady had more than 190 yards at halftime, but as the Bengals held the ball late in the fourth quarter, he had just 245 yards on a 79.1 passer rating. Meanwhile, Burrow had just 188 yards on 26 of 38 passing, but he beat Brady at the ever important game of efficiency at 95.1 as a huge traveling Bengals contingent serenaded

The Bengals cornerbacks waited for The GOAT to get their first interception of the season as Tre Flowers went to the ground in front of tight end Cameron Brate at the Bucs 31 and two crushing third-down penalties on Tampa allowed Burrow to hit Higgins running across the back end zone for a five-yard touchdown with 5:40 left in the third quarter to cut the led to 17-12.

The Bengals didn’t get the two-point conversion but they didn’t have to wait long thanks to their relentless defense. On third down blitzing linebacker Logan Wilson and nose tackle D.J. Reader split a sack, Reader punched the ball out and edge Joseph Ossai recovered at the Tampa Bay 13. Burrow then picked up his first down in six tries on third down from the Bucs 3 when he hit Boyd getting behind cornerback Dee Delaney. Boyd, who saw the bone sticking out of his dislocated finger, last week, gave the Bengals the lead with 2: 40 left in the third quarter. When Higgins slanted his big body for a two-point box-out with a slant on the goal line, it was 20-17.

The defense did it again right away. Bucs running back Leonard Fournette fumbled and Reader emerged with it at the Bucs 39. Burrow sifted two third-down throws, one to Chase on the left sideline and then an 18-yard arrow to tight end Mitchell Wilcox in the middle of the field as he ran up in the pocket and flipped it. Wilcox, playing in his college stadium, set up Chase’s eight-yard touchdown for the 27-17 lead with 12:45 left in the game.

The Bengals got their first possession of the second half on a botched fake punt and started from the Tampa 16. Burrow raced to the 6 on a scramble, but the NFL’s fourth best red zone offense couldn’t get the touchdown. On third down, the Bucs blitzed and safety Mike Edwards crashed into Burrow as he tried to hit Chase one-on-one and cornerback Carlton Davis III muscled it away and they took McPherson’s chippy to cut it to 17-6.

The Bengals used the last 1:39 of the half and five quick Burrow passes for 47 yards to microwave their first points of the game on McPherson’s 41-yard field at the gun that cut the lead to 17-3. Burrow, in the NFL’s top three in most of the major passing categories, was held to the lowest first half passing of his career with 86 yards.

The Bengals were marching as crisply on their opening drive as they were on their opening drive of their last loss five games ago in Cleveland. Same deal. Tipped pass for an interception, Burrow’s 10th of the season, but first against team outside the AFC North. Burrow hit his first three for 30 yards against soft coverage and from the Bucs 40 he went play-action. Leaping safety Keanu Neal got a hand near the line and, that man, Carlton Davis III made a diving catch and was just getting started.

The turnover turned into a 3-0 deficit. Brady had time to convert and third-and-six and third-and-eight, hooking up on the latter over the middle for 16 yards to Mike Evans coming off the line quickly against rookie cornerback Cam Taylor-Britt. After free safety Jessie Bates III had an interception get away from him in the end zone, Brady took a sliding yard to the Bengals 3 and they got a chip-shot field goal.

The Bengals went three-and-out when Burrow had to take what looked to be a coverage sack and Brady turned a 43-yard punt into a fourth-and-one touchdown pass to wide receiver Russell Gage, Jr., as Gage got separation on Taylor-Britt in the left corner to make it 10-0 in the first minute of the second quarter.

Brady’s fourth-and-one seed through a mail slot to Evans on fourth-and earlier in the drive kept it going despite cornerback Eli Apple draped all over him. The play survived head coach Zac Taylor’s challenge and Brady then appeared to take advantage of the young secondary when Evans ran unmolested through a zone and was wide open for a 24-yard gain. Up 10-0, Brady had 112 yards to Burrow’s 39. A few minutes later Evans had five catches for 83 yards, zeroing in on his first 100-yard day since he had 123 against Baltimore Oct. 27.

When the offense tried to get back on track down, 10-0, they had back-to-back three-and-outs. The first one stemmed from linebacker Lavonte David’s unblocked blitz sacking Burrow and he made a great play not to lose the fumble. Then on the next series on third-and-three from the Cincinnati 47, new nemesis Carlton Davis won a physical battle on a back-shoulder throw on the sideline.

The Buccaneers took advantage of doubling the Bengals’ snap count in the first half (40-20), by wearing down the defense in a 10-play, 85-yard drive that consumed nearly five minutes for Brady’s five-yard touchdown pass to wide receiver Chris Godwin that made it 17-0 with 1:39 left in the half. With the Bengals down their two top sackers, Brady played pitch and catch for two touchdowns and 194 yards and 127.8 passer rating in the first half.