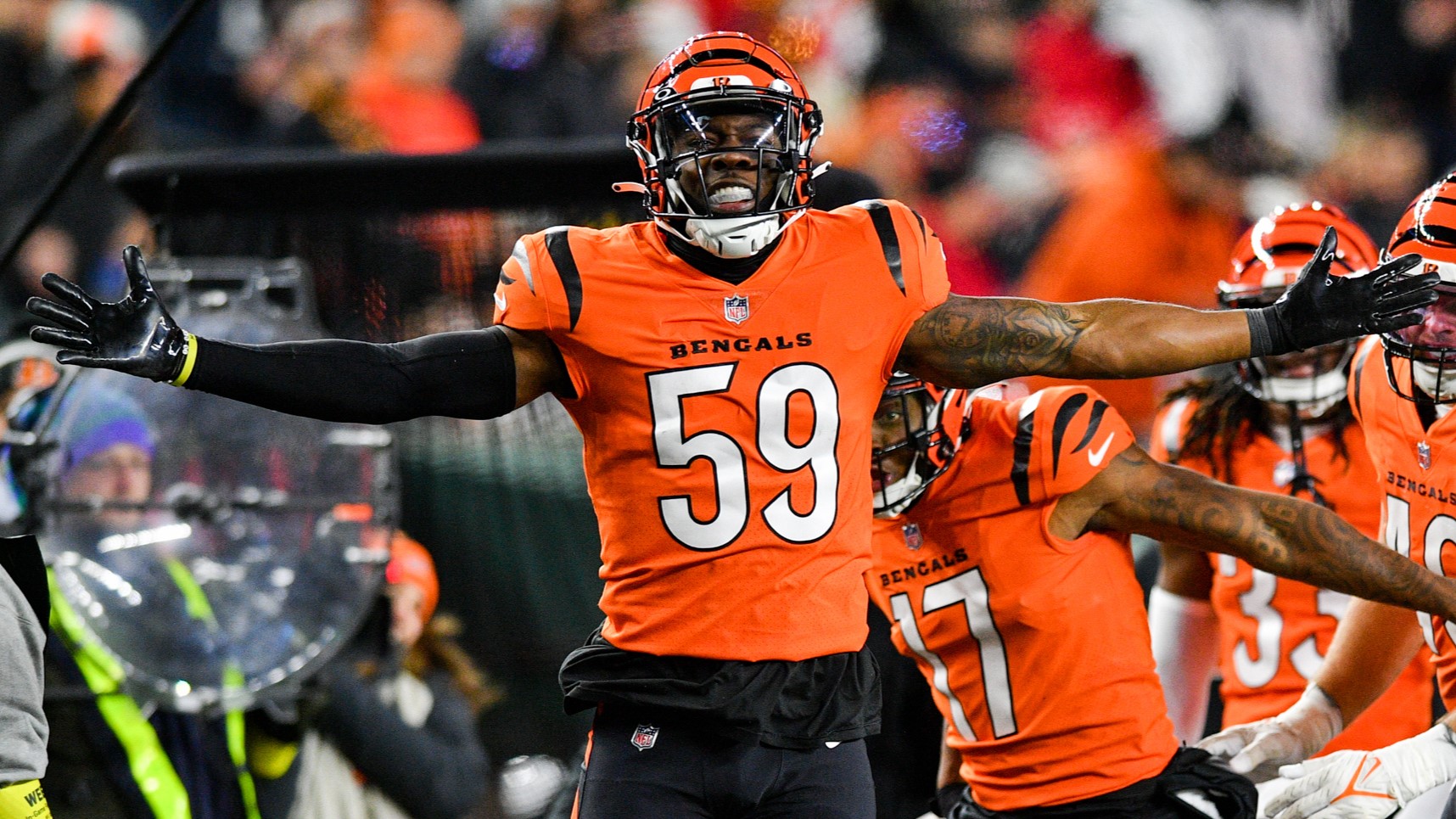 The Bengals and Joe Burrow are the first team to defeat the Chiefs during the Patrick Mahomes era three times on Sunday, and it only took 338 days to accomplish. Each time the margin was three points as the Stripes had to come from behind each of those three games. The Bengals put in a torrid second half to get the win 34-31 on January 2nd, and then 27-24 in OT in the AFC Championship Game in Arrowhead on January 30th, that send them to Super Bowl LVI. After a quick start, the Bengals were down again in the 4th, and had to climb the hill for the victory.

The play of the game was by Mr. Turnover, Germaine Pratt, who forced the game’s first turnover in the first minute and a half of the 4th quarter, and it was HUGE!!

The Chiefs were leading, 24-20, with 13:52 left and looked liked they were salting it away when tight end Travis Kelce grabbed a 19-yarder, but Pratt muscled it out of Kelce’s hands at the logo and Burrow took them 53 yards and got the go-ahead touchdown with 8:54 left in the game as he hit wide open running back Chris Evans underneath for eight yards on Evans’ third catch of the year.

With Bengals edge Trey Hendrickson needing a breather on third down, Joseph Ossai came off the bench to make a shoestring sack of Mahomes and Harrison Butker missed a 55-yard field goal.

It was left for Burrow to make a huge third-and-11 completion to wide receiver Tee Higgins to kill the clock with 72 seconds left as the 66,243 engulfed the river yard in noise saluting their fourth straight win, an 8-4 record and a key-note address against the AFC’s top-seeded Chiefs.

Perine, pinch-hitting again for running back Joe Mixon (concussion). racked up 106 yards on 21 carries for his first 100-yard game since he was a rookie with Washington in 2017. Burrow was seamless on 25 of 31 for 286 yards and a 126.6 passer rating. And welcome back wide receiver Ja’Marr Chase with 97 yards on seven catches in his first game since he re-aggravated his hairline hip fracture on Oct. 23..

As it did in both Bengals wins over the Chiefs last season the red zone was red hot. Only on Sunday early in the second half it was to the Chiefs’ advantage against a Bengals offense that had scored 19 touchdowns on their last 22 trips inside the 20. That included punching in their first two forays on Sunday to take a 14-3 lead. But when they couldn’t get a touchdown on their next three trips, the Chiefs took a 24-20 lead in the first minute of the fourth quarter.

With the Bengals trailing, 17-14, it looked like Burrow had just dropped an 18-yard touchdown pass on third-and-three to the always reliable Boyd. Boyd was wide open at the left pylon, but dropped it and the Bengals had to take Evan McPherson’s field goal to tie it with 7:16 left in the third quarter at 17.

Down the other end of the field, the Chiefs went for it on fourth down from the Bengals 3 and Mahomes, feeling pressure, stormed up the middle, launched himself in the air, and stretched the ball over the goal line before Bengals rookie cornerback Cam Taylor-Britt jarred the ball loose to give the Chiefs a 24-17 lead. It turned out to be Mahomes’ last gasp as he fell 0-3 vs. Burrow. He was good, but the engineer of the NFL’s No. 1 offense was not good enough with just 223 yards on 16 of 27 that computed to a solid but not Burrow 98.2 as the Bengals went to 7-0 when he has a triple digit rating.

With Perine immense in his biggest game in five years, the Bengals drove again to the Chiefs 18 and had a third-and-one, but left tackle Jonah Williams was called for being illegally downfield. On third-and-six, the Chiefs dropped eight and linebacker Willie Gay tipped a pass to force another field goal and make it 24-20.

The Bengals flipped the script on the Chiefs and this time took a halftime lead at 14-10, but like the AFC championship game it was the team that trailed that bolted into the locker room with the momentum after a big defensive play in the low red zone.

Thanks to Chase’s 40-yard torch one-on one job of rookie cornerback Joshua Williams as Burrow beat the blitz, the Bengals had a third-and-one from the Kansas City 4 with 55 seconds left in the half. But they got no push on a quarterback sneak on third down and on fourth-and-one they tried a jet sweep to wide receiver Trent Taylor and old friend Carlos Dunlap shot the gap and dumped him for a three-yard loss.

A huge play for a Chiefs defense ranked last in the league giving up touchdowns in the red zone against a Bengals offense ranked second in converting red zone touchdowns.

It was a monstrous play by Higgins taking a slant from the 12-yard line, beating Williams and running over safety Juan Thornhill.

Burrow hit his first five throws for 53 yards on one of those brisk, bountiful seven-minute opening drives consisting of six passes, five runs and Burrow’s four-yard draw that gave them a 7-0 lead. It was Burrow’s fifth rushing touchdown of the season, breaking Jack Thompson’s Bengals quarterback record of five set in 1979.

It was quite a productive series for his tight ends. Hayden Hurst had two catches for 12 yards and a block on linebacker Nick Bolton, the Chiefs leading tackler, that opened up Perine’s 11-yard catch-and-run. Mitchell Wilcox had his first catch in a month, a 13-yarder over the middle, and added a crushing trap block on the NFL’s hottest defensive lineman, Chris Jones, on Perine’s ten-yard bolt up the middle.

But Hurst injured his calf soon after and was out for the game.

After Mahomes tried to tie the game at seven with a just-as-brisk drive into the red zone, nose tackle D.J. Reader came up with his third tipped pass in two weeks, a third-and-three pass headed to Kelce, to force a field goal.

The Bengals then went up 14-3, thanks to two massive penalties on the Chiefs, a roughing the passer on tackle Taylor Stallworth and a pass interference on first-round cornerback Trent McDuffie covering Chase.

Chase announced his return in the drive, making his first catch on third-and-two over the middle for seven yards. He also picked up a taunting penalty, but it didn’t come back to bite.

The game turned a bit with the Bengals up, 14-3, and six minutes left in the half. On fourth-and-four from the Bengals 37, Mahomes hit a quick pop to wide receiver Ju-Ju Smith-Schuster running in the flat and Cam Taylor-Britt had him in his sights.

But he tried to tackle him high and Smith-Schuster went low for the five yards he needed and it let Mahomes off the hook. A big jet sweep to rookie wide receiver Skyy Moore and a slashing run by running back Jerick McKinnon set up Mahomes’ 30th touchdown pass on a two-yard flip to the wide-open McKinnon with 2:23 left in the half that cut it to 14-10.

How much better could the Bengals defense play in the first half? The Chiefs offense came into the game leading the universe in everything, including 29.6 points per game. The future Hall-of-Famer Kelce didn’t have a catch on two targets (he finished with four catches for 56) and Mahomes and his season passer rating of 105.3 passer rating was ten points below on eight of 14 for just 74 yards.

Burrow was his ususal brilliant self on 10 of 13 for 128 yards and a touchdown that gave him a 132.9 passer rating while Chase had three catches for 54 yards.