Bengals Win a Wild One Over Ravens 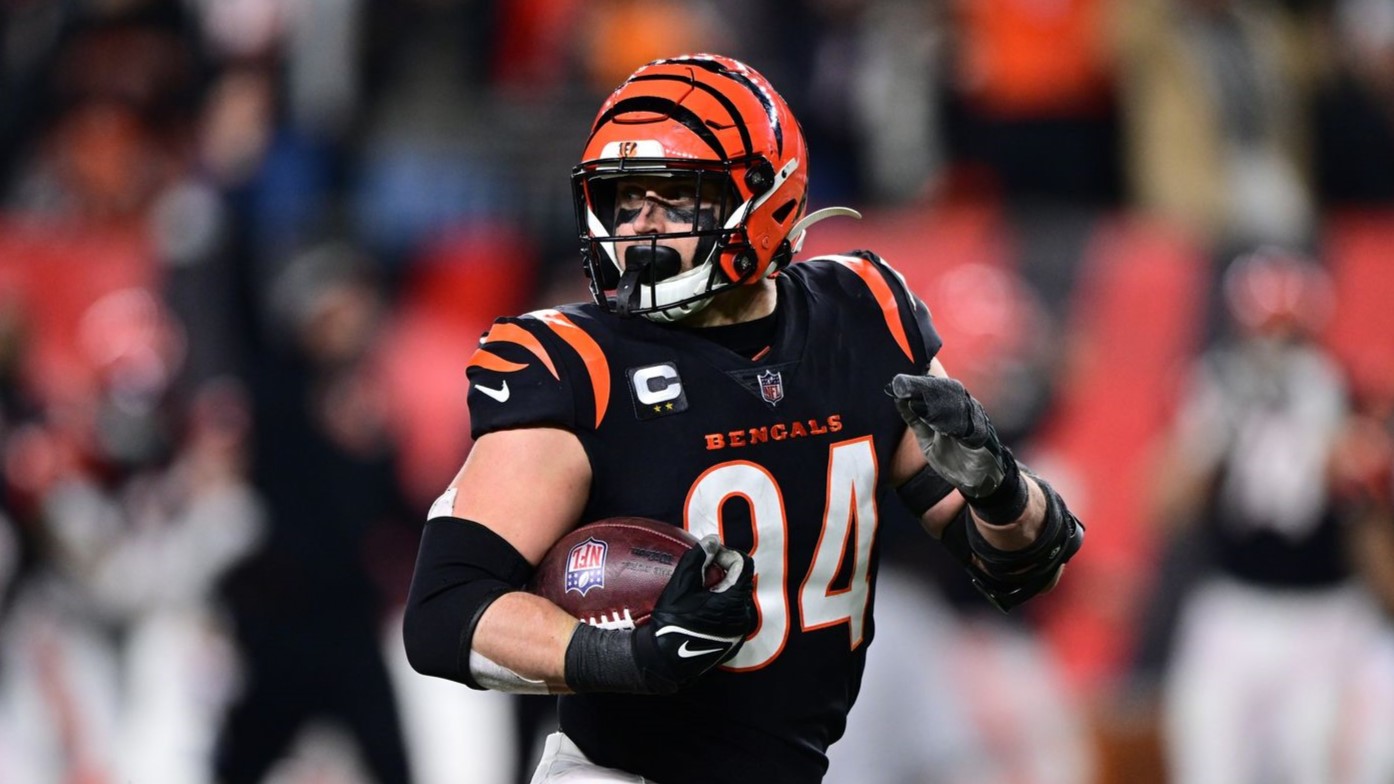 Bengals will head to Buffalo next week for Divisional Playoff

For the second straight Wild Card Game Sunday night at overflowing Paycor Stadium, in the final ten seconds the Bengals defense secured a trip to the AFC Divisional when a bevy of Bengals defenders knocked down Ravens quarterback Tyler Huntley’s desperate pass in the end zone at the gun for a 24-17 victory.

The Bengals, denying the gallant Huntley in his first postseason start, head to Buffalo next weekend.

On third down from the Bengals 1 early in the fourth quarter, Huntley tried to leap and place the ball over the goal line. But it was too far away. Middle linebacker Logan Wilson batted the ball away and the ball rolled off bodies into the hands of Sam Hubbard at the 2.

And he took off on the longest fumble return in NFL postseason, a 98-yard ramble amid a cacophony of sound from the second largest crowd in Paycor Stadium history. As the crowd of 66,399 looked on disbelievingly, Hubbard seemed to check the scoreboard to see who was behind as he made a move and stepped away from tight end Mark Andrews with 11:39 left in the game for a 24-17 lead with their sixth straight game they had a turnover in the fourth quarter.

The Bengals went up 17-10 on their first series of the second half on another flawless six of six drive by Burrow. With the Ravens defense refusing to give the Bengals any pass longer than 20 yards, Burrow dealt underneath. He drilled a 10-yarder to slot receiver Tyler Boyd, found Chase for 19 against the frustrated Marcus Peters and then he muscled a 19-yarder to tight end Hayden Hurst that put the ball on the 1 and Burrow did the rest sneaking to make it 15-10.

They got the two-pointer when Burrow was flushed out of the pocket, started left, reversed field and waited for wide receiver Tee Higgins to run away from Peters across the back line.

But the play of the drive came way back at the Bengals 26 on third-and-inches. Burrow dropped back in the shotgun and Ravens linebacker Roquan Smith had him square in the crosshairs for a loss. But Burrow shimmied and shook and cut it up for four yards.

Yet the Ravens stunningly tied it.

The 17th point came with 2:13 left in the third quarter and tied the game on Huntley’s longest pass of the year. It was a 41-yard touchdown loft to wide open wide receiver Demarcus Robinson. Huntley faked a short throw, cornerback Eli Apple jumped the route and Robinson flew past him.

After the Ravens cut the lead to 9-7 with five-and-a-half minutes left in the first half, the magic of the Bengals’ eight-game winning streak buckled with injuries to starters on each side of the ball and a lethal turnover.

The Ravens got their third sack of the game as the first half clock ticked under three minutes when edge Odafe Oweh beat Jonah Williams wide to set up a third-and-17. Running away from pressure Burrow flipped it to tight end Hayden Hurst and Hurst had a fumbled forced and recovered by Ravens safety Kyle Hamilton at the Bengals 44.

Williams left with a knee injury, the third straight game the Bengals have watched a starting offensive lineman leave with what looked like at least game-ending injury. They turned to second-year man Jackson Carman, a college tackle converted to NFL guard taking his first pro snaps at tackle.

The Ravens cashed the turnover for a chip-shot field-goal by Justin Tucker with three seconds left in the half for Baltimore’s 10-9 halftime lead. But not before a snap sailed over Huntley’s head and he had enough time to pick it up, outrun the Bengals to the sideline and flip a 19-yard pass to tight end Josh Oliver running open down the right sideline.

Also in the drive Apple ran into defensive end Joseph Ossai and left with a neck injury, replaced by rookie safety Dax Hill. The Bengals forced two incompletions from the Bengals 4 to force the field goal and Apple came back for the second half.

The Bengals defense didn’t waste any time keeping the turnover carousel when linebacker Akeem Davis-Gaither picked off Huntley to end Baltimore’s first drive of the game a week after turning over the Ravens four times, including on the last series.

That set up Burrow’s dart throwing touchdown drive with Chase catching four of Burrow’s seven-for-seven. The pair bailed them out of a first-and-goal from the Ravens 19 after left tackle Jonah Williams was flagged for holding edge Jason Pierre on an outside rush.

But in becoming the Bengals all-time postseason receiver, Chase got them all back. One was a 12-yarder over the middle on a quick-play-action fake and the next was a seven-yard touchdown in almost the same spot with Chase spinning away at the 1 for the touchdown with with Burrow getting rid of it as Ravens defensive tackle Calais Campbell was right in his face.

McPherson suffered his first postseason miss on the extra point and they had a 9-0 lead after having the ball for 12:45 while the Ravens had it just 2:19.

But Baltimore promptly flipped the script and pulled off its longest postseason drive ever, a 17-play slog with 12 of them runs. Just what the Ravens wanted to do, engulfing 10:03 of the clock and converting a nifty third-down touchdown on J.K. Dobbins’ two-yard catch and stretch.

But the big play was a facemask penalty on Dax Hill on a Ravens’ third-down incompletion inside the 10 that gave them a fresh set of downs that gave them the touchdown.

The Bengals went up 3-0 on their first drive as McPherson extended his playoff skein to 15-15 on a 39-yard field goal as Burrow hit his first five passes. Burrow had a solid first half … when they had the ball. He rung up a 107.8 passer rating on a take-what-you-give-me 14 of 19 for 122 yards.

The game began in 36-degree weather, a good sign since Burrow came in 7-0in games less than 40 degree