Big First Half Leads Cats Past Vandy in Nashville 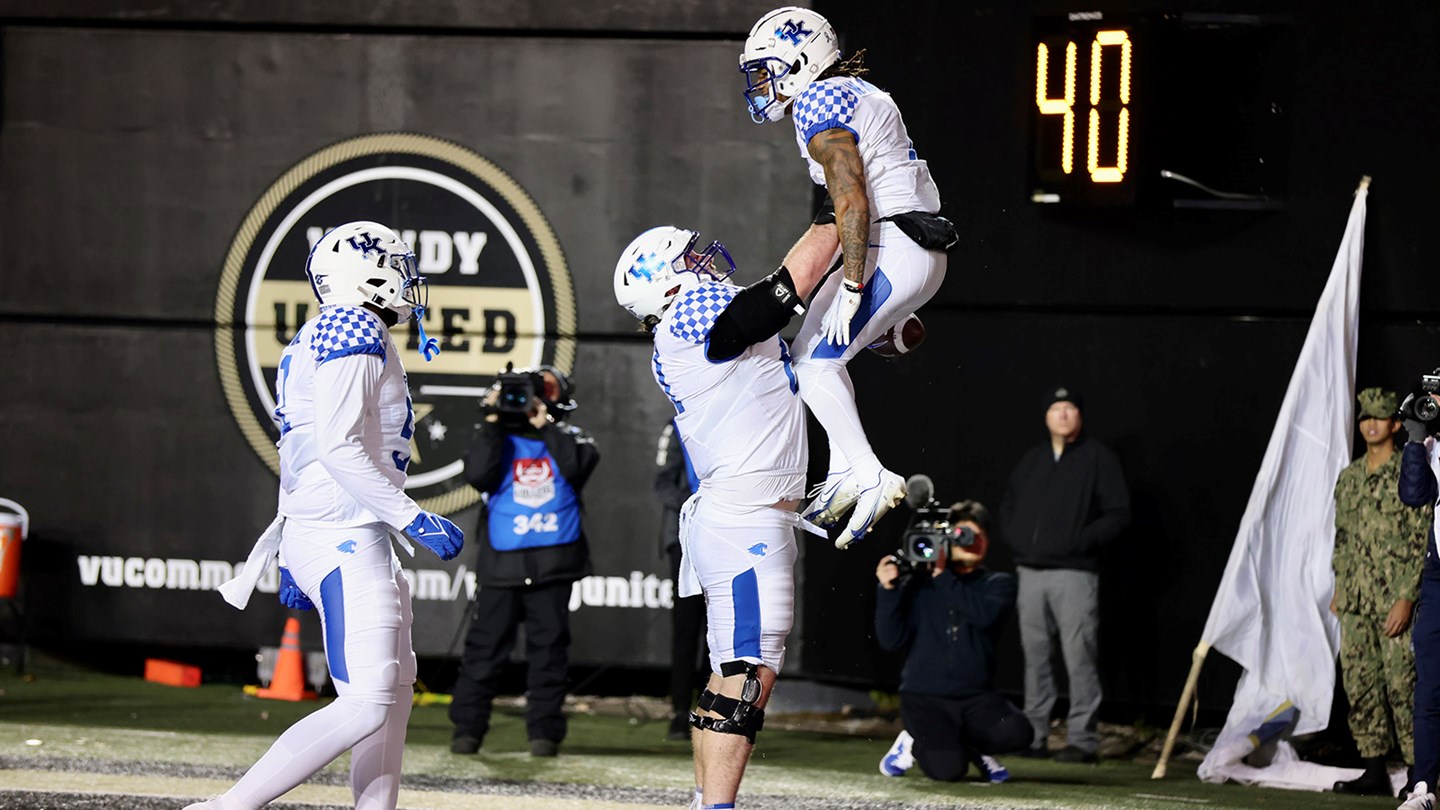 Kentucky scored on its first four possessions of the game, building a sizeable lead in the process, and went on to beat Vanderbilt 34-17 on Saturday night at Vanderbilt Stadium.

Quarterback Will Levis connected on 14 of his 22 passes for 177 yards and a pair of touchdowns. Chris Rodriguez Jr. had 114 yards rushing and a touchdown, while JuTahn McClain had a career high 69 yards on 10 carries.

Vanderbilt (2-8, 0-6) got the game’s first possession. After one first down, the Commodores were forced to punt and the Cats took over on their own 15 yard line.

Kentucky’s offense picked up exactly where it left off last week. The Cats used a nice mix of run and pass, including three completions from Levis to Robinson, to cover 85 yards in 10 plays. The final play was as five-yard touchdown pass from Levis to Robinson in the corner of the end zone. Matt Ruffolo added the point after and Kentucky led 7-0 with 6:07 left in the first period.

With its second drive, Vanderbilt drove into Kentucky territory but the UK defense held, forcing a 48-yard field goal from Joseph Bulovas. The kick was good, making it 7-3 with 44 seconds left in the first.

Kentucky would get into Vanderbilt territory before the end of the quarter on a 39-yard completion from Levis to Robinson. Then, on the first play of the second quarter, Levis hit Izayah Cummings with a 22-yard touchdown pass. Ruffolo added the PAT and the Cats led 14-3 with 14:53 left in the half.

On its next drive, Vanderbilt earned a first down. But, on the fourth play of the drive, UK’s Jalen Geiger intercepted a Ken Seals pass and returned it 31 yards for his first career touchdown. Ruffolo added the point after and the UK lead was 21-3 with 13:09 still left in the first half.

The Kentucky defense forced another punt on Vandy’s next drive. The punt itself covered just 14 yards and the Cats took over at the Vanderbilt 48 yard line.

From there, it took three Rodriguez rushes and a penalty for the Cats to add to the lead. Rodriguez carried for seven and 30 yards before Vanderbilt was penalized, getting the ball to the five yard line. From there, the junior took it in for the touchdown and Ruffolo added another PAT to make it 28-3 with 10:43 left in the half.

After another Vandy punt, Kentucky continued its offensive onslaught. A couple of Rodriguez rushes, a completion from Levis to Ali and a reverse to Robinson got the Cats into scoring position again. But, for the first time in the game, the Commodores held and the Cats settled for a 25-yard field goal from Ruffolo, which was good, giving UK a 31-3 lead with 3:46 to play in the half. That would be the halftime score.

Kentucky got the ball first in the second half but the Cats were unable to do anything with the possession. UK punted and Vandy took over at its own 28.

From there, the Commodores went to backup quarterback Mike Wright and it seemed to work. Vandy drove into the UK red zone and would eventually get to the UK five. And, on fourth and goal, Wright hit Chris Pierce with an eight-yard touchdown pass in the back of the end zone. Wright then hit Cam Johnson on the two-point conversion to make it 31-11 UK with 5:53 to play in the third quarter.

Kentucky took the next possession and would drive deep into Vandy territory as the third quarter came to an end with the Cats still holding a 31-11 lead.

As the fourth quarter started, the drive stalled and Kentucky turned to Ruffolo again. The senior came through again, making a 32-yard field goal to extend the lead to 34-11 with 13:26 to play in the game.

On the ensuing drive, Wright led Vanderbilt down the field again and into the UK red zone. And, on fourth and four from the UK eight, Wright hit Amir Abdur-Rahman with an eight-yard touchdown pass. The two-point conversion failed and UK held a 34-17 lead with 7:33 to play.

Kentucky returns to action on Saturday, hosting New Mexico State on Senior Day at Kroger Field. Kickoff is set for 12 p.m. ET and the game can be seen on the SEC Network.