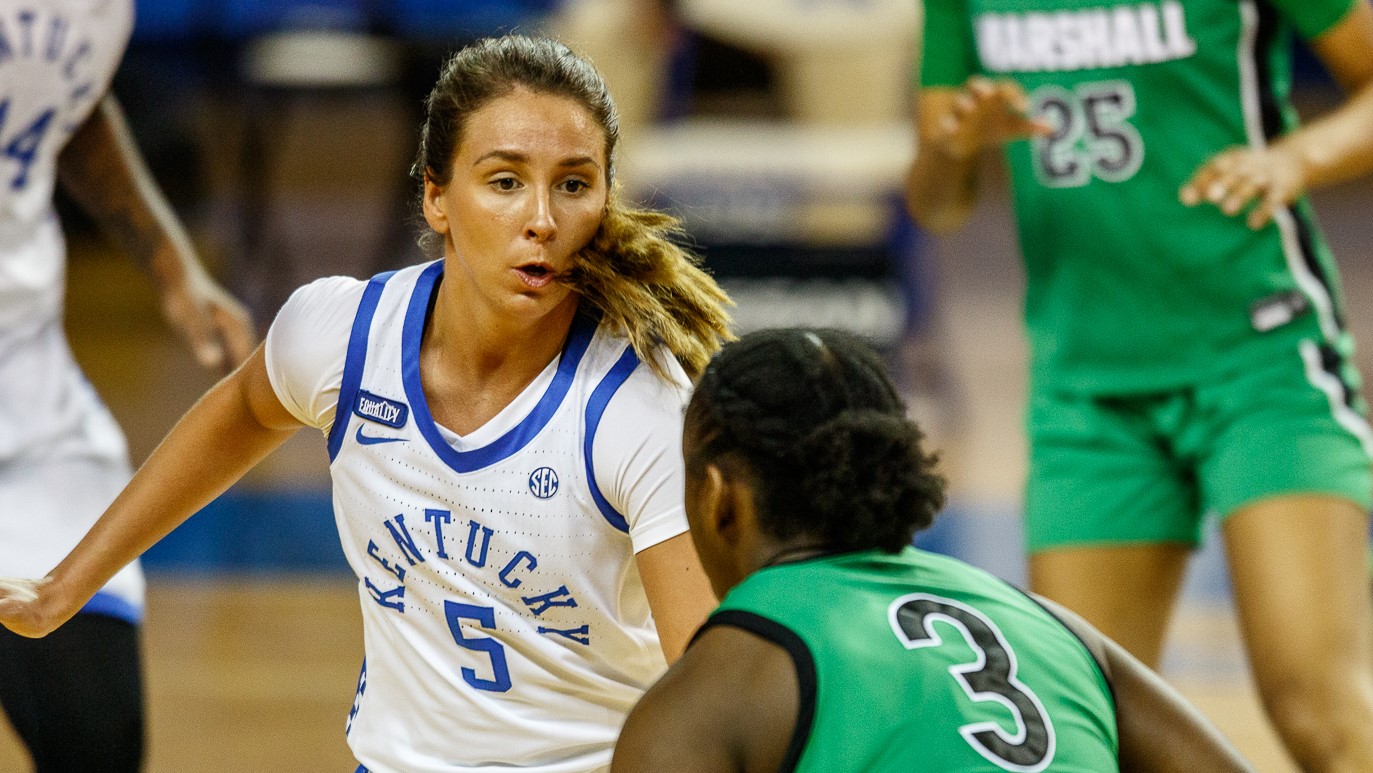 Kentucky (5-0) got a balanced scoring effort in the contest. In addition to Green’s 17 points, UK got 13 points and eight rebounds from Dre’una Edwards and 13 points, five rebounds and five assists from Rhyne Howard. Olivia Owens was the fourth Wildcat in double figures, scoring a season-high 10 points. All 11 players who played for Kentucky in the game scored at least two points.

Kentucky outscored Marshall 18-8 in points off turnovers and 13-4 in second chance points. The Cats also dominated the rebounding battle (40-26) and points in the paint (40-18).

The Cats got off to a very fast start, hitting their first four field goals, including two three-pointers from Howard, to race to a 10-0 lead. After  missing a shot, the Cats extended the lead to 13-0 on a three from Blair Green with 5:30 left in the quarter, prompting a Marshall timeout.

Marshall (1-1) finally got on the board on an Alexis Johnson layup with 4:41 to play in the first. The Herd would cut the UK lead to 15-6 before Robyn Benton rattled home a three from the left side to extend the UK lead to 18-6. Kentucky would lead 22-7 after the first quarter.

In the second quarter, Marshall would try to chip away at the UK lead but each time they did, the Cats would answer the score. Kentucky’s first five baskets in the period came from six different players (Green, Patterson, Edwards, Tatyana Wyatt, Benton and Olivia Owens). The Herd would cut the UK lead to eight, 34-26, on a basket by former Kentucky Miss Basketball Savannah Wheeler, but Kentucky scored the last seven points of the half to take a 41-26 lead into the break.

Eight different Wildcats scored in the first half, led by Green’s nine points and eight from Howard.

Marshall would score the first three points of the second half, on three free throws, to cut the UK lead ot 41-29. But the Cats scored five of the next seven points to grab a 46-31 lead with 7:43 to play in the third. From there, Kentucky closed the quarter on a 17-3 run to lead 63-36 with 10 minutes of action remaining.

In the fourth quarter, Kentucky would continue to stretch the lead with the 34-point final margin being the largest lead of the game.

Kentucky returns to action on Sunday, hosting Samford at Memorial Coliseum. Tipoff is set for 2 p.m. ET and the game can be seen on SEC Network Plus.