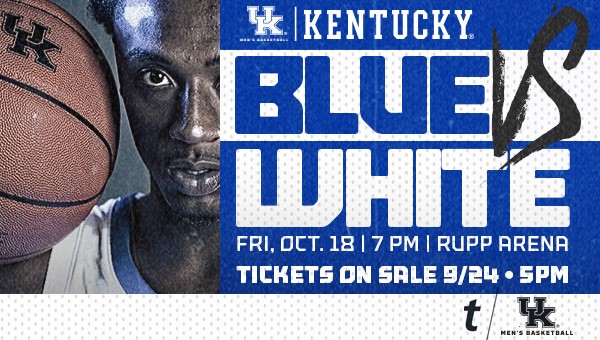 Annual instrasquad scrimmage slated for Oct. 18 at 7 p.m. in Rupp Arena on the SEC Network

LEXINGTON, Ky. – Tickets for the Kentucky men’s basketball team’s Blue-White Game go on sale Sept. 24 at 5 p.m. The annual exhibition is scheduled for Oct. 18 at 7 p.m. in Rupp Arena. The game will be televised by SEC Network.

Tickets will be sold exclusively online through Ticketmaster.com or through the Ticketmaster app. Ticket prices will range from $5 to $25. All seating is reserved.

Beginning Sept. 24 at 9 a.m., UK students may claim up to two free reserved tickets for the Blue-White Game, while supplies last. Student tickets may be claimed in person at the Joe Craft Center ticket office with a valid UK student ID.

A complete listing of on-sale dates and single-game ticket prices will be released soon. For more information, visit UKathletics.com/tickets. The Cats will tip off the 2019-20 season Oct. 11 with Big Blue Madness in Rupp Arena.

The full 2019-20 schedule was released last week with most of the tip times and TV designations. The schedule is available to view at UKathletics.com.