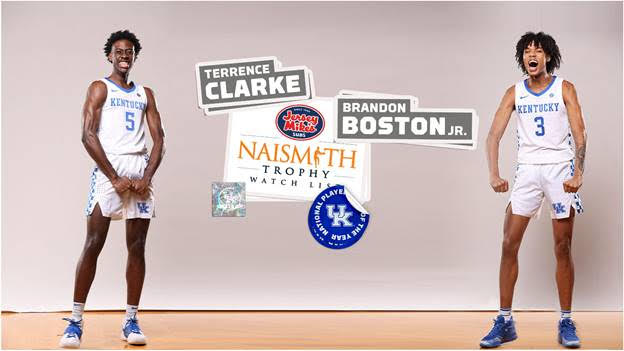 The Southeastern Conference has six preseason picks, including UK’s two.

A list of the midseason 30 team will be released in early February, followed by the 10 national semifinalists and four finalists on March 4 and March 16, respectively. Players who do not make the watch list are still eligible to be selected for the midseason 30 team. The 2021 Naismith Trophy will be awarded during the Final Four at the Naismith Awards Brunch on April 4.

Boston, a consensus five-star prospect and Kentucky’s top-ranked player in the 2020 class, is a preseason All-SEC First Team selection by both the media and the league’s coaches. Boston averaged 19.7 points and 7.0 rebounds per game at Sierra Canyon his senior season. He helped lead the team to a 30-4 mark and a No. 2 national ranking. Boston was named the California Male Athlete of the Year and the California Basketball Player of the Year by USA Today. He was also tabbed a First Team Naismith All-American, Second Team Sports Illustrated All-American, SLAM Magazine All-American, California Mr. Basketball and the Gold Coast League MVP.

The 6-foot-7 guard was a member of the Brewster Academy team that won the 2019 National Prep Championship. Clarke led his team back to the 2020 finals with a 34-3 record before the COVID-19 pandemic canceled the rest of the event. For his efforts, Clarke was named to the New England Preparatory School Athletic Councill AAA Player of the Year and was a NEPSAC AAA First Team selection. During his prep career, Clarke averaged 16.2 points per game to go along with 5.1 rebounds and 3.7 assists per game in the 2019 Nike Elite Youth Basketball League.

Clarke was on the Jerry West Award preseason watch list. The West Award is given to the nation’s best shooting guard by the Naismith Memorial Basketball Hall of Fame.