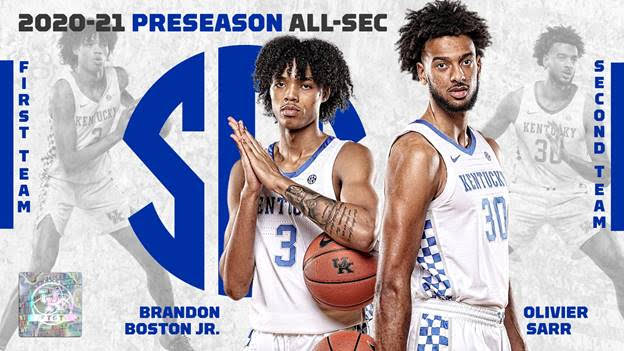 Boston, a freshman, was tabbed to the five-man All-SEC First Team and Sarr, a senior transfer from Wake Forest, was one of six players on the All-SEC Second Team.

Voting was conducted by a select panel of both SEC and national media members.

For just the second time in 12 seasons under John Calipari and the first since the 2010-11 year, a season that culminated in a Final Four berth, the Wildcats were not picked to win the regular-season league crown. That preseason honor this season goes to the Tennessee Volunteers, who the media predicted will unseat the Wildcats, the defending SEC champions, in 2020-21.

Kentucky, ranked No. 10 in the preseason Associated Press Top 25 poll earlier this week, was picked second, followed by LSU, Florida and Alabama, in that order.

In most seasons, UK has lived up to the high expectations, having won six regular-season SEC crowns in the Calipari era and a league-high 49 overall after posting a 15-3 record last season. The Wildcats also own six SEC Tournament titles under Calipari.

Each school selected media members that cover their team and additional media from across the nation were selected by the conference office to comprise the voting panel. Points were compiled on a 14-13-12-11-10-9-8-7-6-5-4-3-2-1 basis. Ties were not broken.

Sarr and Pons were joined on the All-SEC Second Team by Javonte Smart of LSU, Dru Smith from Missouri, AJ Lawson of South Carolina and Savion Flagg from Texas A&M.

While noteworthy, preseason honors don’t always tell the story of the season. Neither Immanuel Quickley nor Nick Richards were picked for the preseason media All-SEC teams or the coaches’ All-SEC picks a season ago. Quickley played his way to the coaches’ 2020 choice for SEC Player of the Year while making the media’s All-SEC First Team, and Richards was an All-SEC First Team selection by both.

Boston hopes to be in consideration for the end-of-season honors and will enter this 2020-21 with considerable fanfare. A consensus five-star prospect and Kentucky’s top-ranked player in the 2020 class, Boston averaged 19.7 points and 7.0 rebounds per game at Sierra Canyon his senior season. He helped lead the team to a 30-4 mark and a No. 2 national ranking. Boston was named the California Male Athlete of the Year and the California Basketball Player of the Year by USA Today. He was also tabbed a First Team Naismith All-American, Second Team Sports Illustrated All-American, SLAM Magazine All-American, California Mr. Basketball and the Gold Coast League MVP.

Kentucky will begin its season Nov. 25 vs. Morehead State in the first of three games in the Bluegrass Showcase at Rupp Arena. UK’s 2020-21 revised schedule was released last week. It features 27 games before postseason play, nine against some of the best nonconference opponents in the country and 18 in the always difficult SEC.

Kentucky will be tasked with replacing 94% of its scoring from last season – most of the Calipari era – 92.4% of its minutes, 84.4% of its rebounds, 98.6% of its assists and 91.5% of its blocks. The Wildcats said farewell to eight of their top nine scorers from a season ago, including all five starters. The lone major returning contributor from last season will be sophomore forward Keion Brooks Jr., who averaged 4.5 points and 3.2 rebounds per game in 31 appearances, including six starts.

SEC Player of the Year