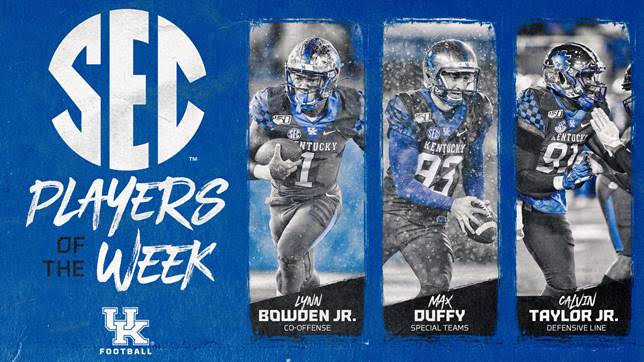 His 204 rushing yards is the most by an SEC player this season. He is just the seventh player in UK history to rush for 200 yards in a game, the second quarterback to do so. Mike Fanuzzi had 208 yards in 1974 vs. Miami (Ohio) as a signal caller. This marks Bowden’s second SEC Offensive Player of the Week honor in the last three weeks.

Duffy, of Perth, Australia, had a magnificent night of punting and also ran a fake punt that set up a touchdown. He punted five times for a 52.4-yard average, with no return yards and had three punts inside the 20-yard line. Early in the fourth quarter, on 4th-and-6, he spied an opening and ran 26 yards for a first down; the impromptu dash helped set up a Wildcat touchdown. He also had a crucial punt in the third quarter; with UK backed up on its own 9-yard line, he flipped the field with a career-long 70-yard boot. Missouri’s average field position after Duffy’s punts was its own 14-yard line.

With Duffy’s distance and placement, Kentucky leads the nation in net punting with a 46.2-yard net average. Duffy currently ranks second in the SEC and second nationally in punting (48.8).

Taylor, a native of Augusta, Georgia, earns his first conference honor after totaling three tackles, including a career-high two quarterback sacks, in the win over Missouri.

In the second quarter, his third-down sack also caused a fumble; although Missouri recovered the fumble, it forced a punt and UK drove for a touchdown. Later in the second quarter, his five-yard sack preceded a Missouri turnover that the Wildcats converted to another touchdown. Taylor helped the UK defense hold Missouri to season lows of seven points and 289 yards total offense.

For the season, Taylor has five sacks, good for third in the SEC.

UK is 4-4 overall, 2-4 in the SEC. After a bye this weekend, the Wildcats will play host to Tennessee in Kroger Field on Saturday, Nov. 9.