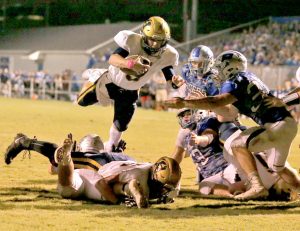 Hazard’s Bailey Blair dives in for Hazard’s only score. (Photo by Brendon Miller)

In a rematch of last years Semi State Tournament, Coach Mark Dixon’s Hazard Bulldogs traveled to Paintsville to take on Coach Joe Chirico’s Paintsville Tigers. Both teams were trying to fine tune their teams for a run at a State Title. Paintsville was riding a four game winning streak which included back to back road wins at Lawrence County and at Fairview. Hazard had won three in a row after a disappointing loss to Somerset. Hazard is trying to make it back to the State Finals again and Paintsville wants to get their themselves and consider Hazard a huge roadblock.

Paintsville RB Tyrese Allen leads a balanced attack for the Tigers with 477 yards rushing coming in to the game. Tanner Smith is not far behind for Paintsville with 454 yards rushing. Both are in the top 20 in Class 1A. Hazard lost their top rusher, Corey Smith to injury earlier in the year. Despite key injuries, Hazard has not let that stop their offense.

The pregame excitement was just what fans expected as Paintsville took the field to Fireworks and a full house of screaming fans. The Tigers showing their Patriotic spirit came on the field with an American Flag in front and in back of their entrance in support of the “Military Appreciation Game”

Paintsville would start the 2nd quarter with a couple runs and a first down pass to move the ball to their own 42 yard line. Paintsville continued to hammer away at the Hazard defense with the relentless running of Tyrese Allen. Allen is a 6’4” 290 pound Senior and is a chore for the Bulldogs to bring down. Paintsville would be the 1st to hit pay dirt as Tanner Smith scored on a touchdown pass from Jake Hyden. The Tigers would miss the extra point and would settle for a 6-0 lead with 5:21 to go in the 1st half. Hazard would take the kickoff to their own 28 yard in an attempt to get on the board. Hazard would quickly go 3 and out and punt the ball away to Paintsville 28 at the 3:28 mark of the 2nd quarter. Paintsville would make a gutsy call for a 4th & 1 from their own 37 yard line and would get the first down on a Tyrese Allen 5 yard run. Paintsville would stall on their drive and punt the ball away to Hazard with 59.1 seconds left in the half. Hazard would come out throwing on their next possession. After a pass interference call on the Tigers, the Bulldogs looked to have a chance to get on the board at the 14.8 mark of the 2nd quarter. Coming out of their time out hit on a big pass play to the Tigers 21 yard line. Hazard would call another timeout with 8.6 on the clock. After an incomplete pass with 2.3 seconds on the clock to set up a field goal attempt for the final play of the half. Paintsville would block the attempt and go in to the half with a 6-0 lead.

Hazard opened the 4th quarter on the Paintsville 35 yard line desperately needing to put a dent in the scoreboard. Hazard would call a timeout to come up with a play to get them on the board, but would have a false start penalty to push them back. Hazard would go for it on 4th and 4 and got the 1st down despite a great hit by Chris Allen from Paintsville. Hazard’s passing game seem to be gaining steam as they moved the ball down to the Tigers 14 yard line. Hazard would get on the board with a diving touchdown run by #3 Bailey Blair. Hazard cut the lead to 12-7 with the extra point. Hazard gained momentum with an impressive 65 yard drive. Paintsville’s Tanner Smith would return the kickoff to their own 30 yard line. Paintsville went back to their horse Tyrese Allen to try and take time off the clock, but Hazard’s defense stiffened and put the Tigers in a 4th and 4 yards to go situation. Paintsville punted the ball to the Hazard 21 yard line leaving the Bulldogs to go 79 yards with 6:42 left in the game. Hazard came out with a good 6 yard run. Blair would get another 1st down with a 6 yard run. Hazard would keep pounding the ball as Blair would get another 1st on their own 46 yard line at the 4:30 mark on the clock. Blair would then connect on a 9 yard pass and were looking at a 3rd and 1 yard to go. Blair looked to be stopped in the backfield but broke free for a 1st down. Blair would then hit Parks on a big pass play down to the Tigers 18 yard line with 2:30 to go. Paintsville would then take a timeout with 2:13 to go trying to stop the Bulldog momentum. Blair clearly had taken over this drive for Hazard, but Paintsville wasn’t done as Daniels sacked Blair for a 1 yard loss. Hazard then had an incomplete pass bringing up a 3rd and 9. Blair then ran the ball for 6 yards bringing up what could be the play of the game with 4th and 3 yards to go for the go ahead score. Paintsville would bend but not break as they stopped Blair at the goal line and would get the ball back at the 2 yard line with 48 seconds to go in the game. Paintsville would run out the clock and in the process avenge their loss to Hazard in the State Semi Finals by the score of 12-7.

Paintsville climbs to 7-1 while Hazard will drop to 5-2. Congratulations to both teams on a great game.