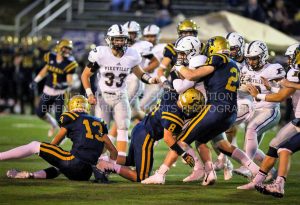 Bluegrass Sports Nation Game of the Week.  KHSAA Football week 7, Pikeville Panthers vs The Hazard Bulldogs, in a district rivalry of Class A, District Eight Competition.

District Rivals Pikeville Panthers and the Hazard Bulldogs battled each other at Hazard’s Daniel Field.  The game was the first district game for either team who compete in Class A KHSAA Football district eight.  The game came with a great deal of hype, and the crowd anticipated a great game between the two teams.  District Rivalries are an exciting time, in the coverage of High- School athletics.  The Game tonight didn’t disappoint and the Media coverage for tonight’s game had more media, than any high school game Bluegrass Sports Nation has attended this year.  Some of the media outlets covering tonight’s game included WYMT TV, FM Radio Station 101.1, Thacker Grigsby’s Hometown TV, and Bluegrass Sports Nation were a few of the media covering tonight’s highly anticipated game.  Having covered the Bulldogs earlier in the season in week two against Harlan County, I am very aware of how exciting an atmosphere Hazard’s Daniel Field provides.  While the victory against Harlan County was impressive and had a great crowd, the game tonight had a different level of excitement.  The Student spirit line were more engaged tonight, with loud chants, and the Band of Gold played the school fight song before the Bulldogs entered the field for tonight’s action.  Fireworks exploded during Team entrances and during Scoring plays in the Background, and the Bulldog faithful tailgating separates Hazard High-School from any other team that I have covered with BSN this year.

Pikeville received the ball to start the first quarter.  The first couple of series become a defensive battle for both teams with several 3rd and out possessions.  Neither team could get an offensive flow going and the defensive pressure made for some hard- hitting football.  The game marked Pikeville Panthers Sophomore Quarterback #3 Connor Roberts first start of his high-school career and the first couple of possessions seemed nervous, struggling to complete passes.  The Last time BSN Covered Hazard, Pre Season MR Football #34 Cory Smith was in action, since then the dynamic back has succumbed with a season ending injury.  Adjusting to life after Smith has changed the way Coach Mark Dixon coaches his team.  Pikeville QB Roberts, started to feel comfortable in the pocket and made several first downs with a drive late in the first quarter.  Pikeville scored with 1:27 remaining in the first quarter with a fourteen- yard Quarterback keeper run from #3 Conner Roberts.  Pikeville led Hazard 7-0 at the end of the first quarter.

While the first quarter was a defensive battle with only one score, the second quarter the offenses started clicking and the quarter featured multiple scores.  Hazard scored first in the second quarter with a twenty- one yard passing Touchdown From #3 Bailey Blair to # 24 Braxton Whitaker.  The score now tied at seven with 11:55 remaining in the half.  On the next series Pikeville relied on the scrambling ability of Quarterback Roberts to advance the ball down the field.  With 11:02 remaining in the first half, Roberts keeps the ball avoids a sack, gets into the backfield makes several Bulldogs defenders miss and rushes for a thirty- one yard gain, into Hazard territory at the twenty eight yard line.  The next play Roberts finds # 2 Seth Pugh for another first down, picking up thirteen yards.  Pikeville threatening to score deep in Hazard territory fumbles the ball at the one -yard line, just before scoring the ball.  The Ball recovered by Hazard’s # 7 Skylar Pelfrey.  Hazard’s Daniel Field was now ecstatic, after the big fumble recovery by the Bulldogs.  Hazard had a strong series after recovering the football but were unable to score on the series.  Hazard faced a 3rd and six at the twenty- six yard line and were stopped as QB #3 Blair scrambled around the pocket attempting to fine a lane or open receiver, only to be stopped at the line of scrimmage.  With 5:20 remaining in the second quarter, Pikeville had the ball and faced a third and seven.  Pikeville QB Roberts who is another great scrambling quarterback, converted on the down picking up eight yards. The next couple of plays Roberts found his groove becoming comfortable in the pocket and routinely gained first downs against the bulldog defense.  On back to back plays Roberts picks up two consecutive first downs with his scrambling ability, crossed into mid field at the Hazard thirty -eight yard line while frustrating the defense.  Hazard defenders become extremely frustrated as no one had an answer or could stop The Pikeville Quarter Back.  Hazard’s #24 Braxton Whitaker tackled Roberts and was called for a penalty, fifteen-yard penalty for grabbing the Face Mask.  The Penalty put the ball at the Hazard twelve- yard line, giving the Panthers a great opportunity to score before the half.  Pikeville scored on the next play with a twelve -yard run by # 15 Zack Roberts.  Pikeville led 14- 7 with 3:19 remaining in the first half.  Just when Pikeville thought they had some Breathing room and was going into the half with the lead, Hazard had different ideas.  Hazard’s QB Bailey Blair Finds # 24 Braxton Whitaker for a fifty- one yard gain, Whitaker was very close to scoring and was finally ran down @ the Pikeville one- yard line.  Blair keeps the ball and rushes for a one- yard touchdown QB run, with 1:00 remaining in the half. The teams entered the half with the game tied at 14.

Hazard comes out of the half refocused, determined, and plays their best Football of the game.  Hazard scores on two possessions in the third quarter and begins to pull away from the Pikeville Panthers.  Bailey Blair scores a Touchdown with a one- yard QB sneak run of one yard.  Hazard now led 21- 14, Hazard’s first lead of the game.  With Pikeville getting the ball, the Bulldog defense was aggressive and had a lot of success stopping Pikeville and QB Roberts from picking up first downs.  Hazard started Blitzing line backers, pushing the offensive line back and again made the Panthers uncomfortable.  QB # 3 Roberts who was effective in the first half against the Bulldog’s on several possessions with his legs, become rushed and uncomfortable in the pocket, making several mistakes.  With 6:28 remaining in the third quarter Roberts was on the verge of being sacked, tossing the ball downfield only to be intercepted by #21 Reese Fletcher.  Fletcher picked off the ball at the forty- yard line of Pikeville, and had some room to run gaining nine yards. Hazard had the ball and the QB # 3 Blair found two of his favorite receiving targets # 21 Reese Fletcher and #24 Braxton Whitaker for back to back first downs.  Pikeville stopped the Bulldogs from scoring a touchdown, after stopping them on a third down.   Hazard’s Tyler Collins #32 lined up for the field goal attempt, a twenty- seven yard field goal PAT.  The kick was good, Hazard now had a lead of ten points over the Panthers.  Hazard 24- Pikeville 14, 3:45 remained in the third quarter.  Pikeville was down but continued to fight, the QB Roberts kept them in the game.  Roberts finds #1 Jackson Hensley on a post route for a fifty four yard gain.  Hensley was almost brought down at mid field, however the defender hits the ground Hensley doesn’t and gains additional yardage by continuing to run.  Hensley was finally tackled in Hazard territory at the twenty- six yard line.  Pikeville scored on the next possession as Hazard received a fifteen-yard unsportsman like penalty added to the end of the run.  Pikeville’s QB Roberts scores on a twelve- yard QB rush.  The score put the Panthers only down four points, with 1:30 remaining in the third quarter. The Score at the end of the Third Quarter Hazard 24- Pikeville 20.

The fourth quarter started and the game was very winnable for both teams.  On the opening play of the final Quarter, Hazard scores on an eight- yard run by #21 Fletcher.  Once again Hazard, felt like they had some breathing room now being up by eleven points in the fourth quarter.  Pikeville received the ball after the Fletcher TD, and the crowd witnessed one of the most exciting plays of the night.  Jackson Hensley received the ball at the three- yard line, ninety- seven yards later scores on the kickoff return.  Pikeville goes for the two- point conversion, but were unable to convert.  Hazard now lead by five points Hazard 31 Pikeville 26, 11:43 remained in the game.  Hazard scored one more time in the game with a five- yard rushing TD, by QB Bailey Blair. The score was the last scoring possession of the game, hazard goes on to defeat the Pikeville Panthers 38-26.

Hazard improves on the season to a four and one record, picking up their first of the highly competitive 8th district of Class A football.  Hazard will play again next week @ home hosting Phelps High School.  Pikeville drops to 1 and 4.  Pikeville will play on the road at Calloway County next Friday.  Bluegrass Sports Nation wishes both team’s good luck with the rest of the season, it has been a pleasure covering your respected teams.  BSN will be continuing our Game of the Week coverage next week, the game has yet to be announced, stay tuned as Brendon Miller will do a video announcing our game of the week coverage.