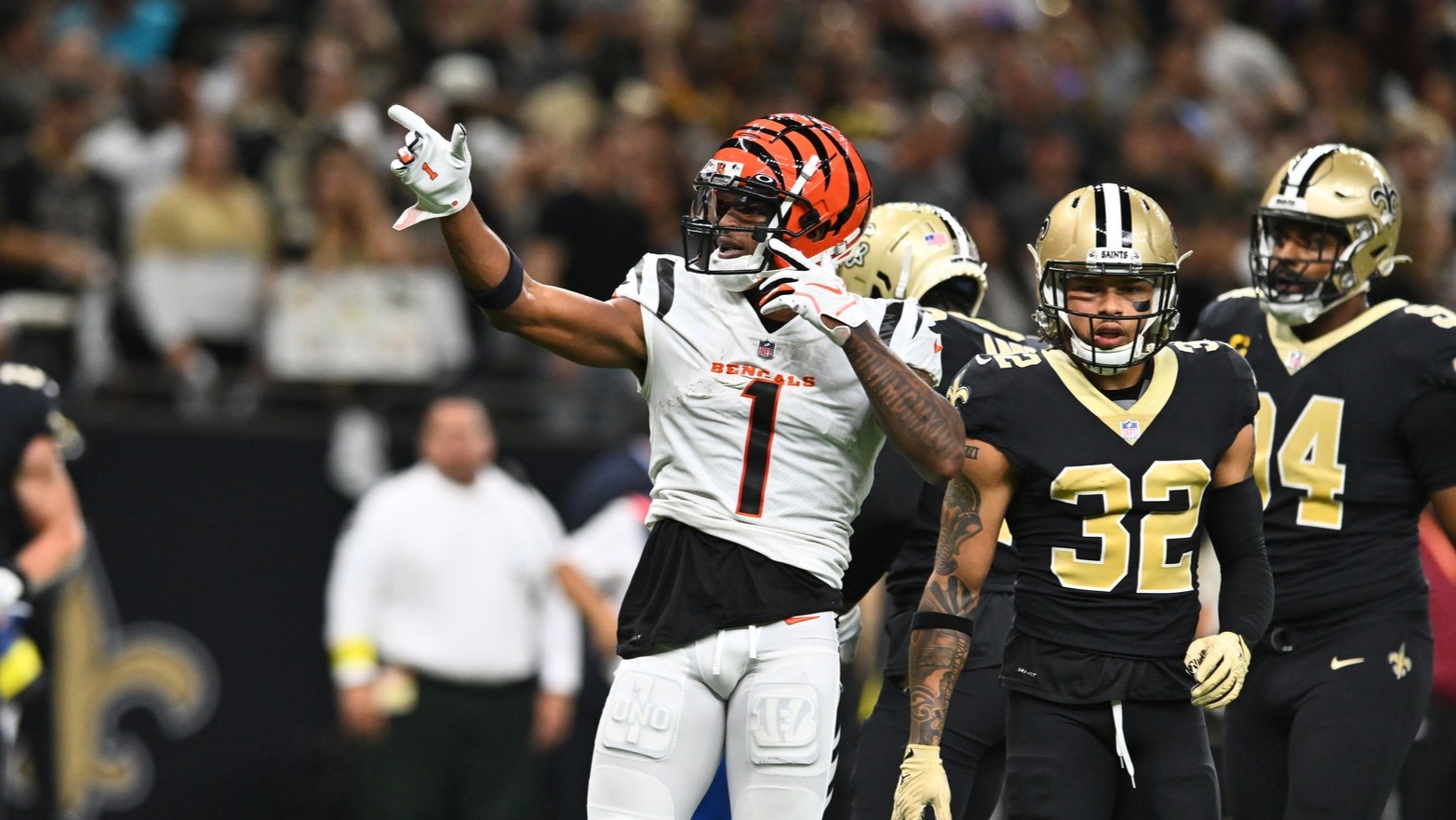 Bengal even record at 3-3

Joe Burrow and Ja’Marr Chase made some magic in the Superdome once again, connecting on a go-ahead 60-yard touchdown with just under two minutes left and the Cincinnati defense held firm on the next drive to secure a 30-26 win over the Saints on Sunday.

The Bengals offense, which found a rhythm in the second quarter and scored on its final five possessions, started its late drive at the Cincinnati 40-yard line thanks to an errant punt that sailed out of bounds. It took just one play for Burrow to cash in, as he hit Chase for what initially appeared to be a first-down gain. But Chase broke a tackle and raced clear past a New Orleans defensive back before high-stepping into the end zone in his home city.

A failed two-point conversion led to Andy Dalton and the Saints offense getting the ball back down by four with 1:57 remaining. He dinked and dunked four short passes, three to the elusive Alvin Kamara, to set New Orleans up with a first-and-10 at the Cincinnati 41. The Bengals, who had lost two games already this season on walk-off field goals, needed a playmaker to step up and grab the victory. That came on third down when B.J. Hill and Sam Hubbard collapsed on Dalton and brought him down for a seven-yard sack, forcing the Saints into fourth-and-forever. A desperation heave down the right sideline was covered up by Eli Apple, and the ball fell incomplete while Who Dey nation exhaled with a road win to improve to 3-3.

Chase finished with a season-high 132 receiving yards on seven catches, while Burrow went 28 for 37 for 300 yards and three passing touchdowns.

The Bengals battled all day. Down 26-21 as the game lurched past the middle of the fourth quarter, Burrow came up with an unbelievable, whirling dervish third-down conversion to wide receiver Tyler Boyd.

Then he converted another huge third-and-eight to Chase, overcoming a holding call. But back-to-back sacks forced Evan McPherson’s 52-yarder to cut it to 26-24 with 3:41 left.

After the defense allowed the Saints a field goal at the end of the first half and a field goal with 7:12 left in the third quarter on combined drives that lasted nearly 13 minutes, the Saints had a 23-14 lead.

The opening drive of the half, a 7:48 drain job, was defined by a third-and-25 roughing the passer flag on Bengals right edge Trey Hendrickson trying to get to Dalton.

But Burrow and Chase found some of that LSU magic and needed just 3:43 to cut the lead to 23-21. Chase broke a 26-yarder on the sideline, turning a missed tackle into 20 of the yards. Then Chase beat cornerback Paulson Adebo inside and Burrow drilled a 15-yard touchdown pass.

Yet, the Bengals defense just couldn’t get off the field. They only gave up a red-zone field goal to go down, 26-21, but there was only 11:07 left. Still, they played some terrific, stubborn ball as the Saints jacked their lead in time of possession to 10 minutes with 215 rushing yards. New Orleans had the ball for 14 plays on their two lone drives that began in the third quarter.

After the Bengals tied it at seven, the Saints responded right away with the killing play delivered by the just-activated, undrafted Rashid Shaheed in his NFL debut. The quicksilver Shaheed broke open a 44-yard semi reverse jet sweep on a wide-open right edge and the usually sure-tackling secondary missed three tackles to give up the touchdown that made it 14-7.

Then the Bengals couldn’t match with a critical three-and-out. On first down, Tee Higgins dropped a wide-open pass, then on the next snap he had the ball defended before a third-down dump pass set up the punt.

The Bengals proud run defense took a shot with two back-to-back long runs on the heels of Shaheed’s sprint. Kamara ripped off 24 to the other edge, the left, and then Taysom Hill, replacing Dalton at quarterback, kept on the zone read and he knifed through the middle for 31 yards against a defense that hadn’t allowed a run longer than 25 yards all year.

Burrow responded with a huge drive to cut the Saints’ lead to 17-14 and he saved the best for last. After the Bengals took a timeout in the third-and-eight din, Burrow dropped back for the ninth time in the ten-play drive. Against the blitz, Burrow made a quick decision and took off up the middle and ran through the wide-open left side for a 19-yard touchdown with 5:44 left.

But complementary football was escaping the Bengals. The defense couldn’t get a quick stop as Dalton, even without his top three receivers, converted third-and-10 and third-and-11 going after former Saints cornerback Eli Apple. Apple then came up with a nice read in space in the red zone and recorded a loss that forced Will Lutz’s 30-yard field goal that gave the Saints a 20-14 halftime lead. The drive drained the rest of half after the Bengals had cut it to 17-14.

It was a stunner for the Bengals defense. They came into the game giving up just 99.6 yards per game on the ground, good for seventh in the league. But the big runs gave the Saints 144 rushing yards 18 minutes into the game and 164 yards in the half. The team that was 11th best in yards per carry allowed gave up nearly 10 per run. Only one time last season did the Bengals give up more than 164 on the ground and that was in the regular-season finale when the regulars didn’t play.

It was a contrast in styles. With their receiving corps decimated, the Saints turned to the run. The Bengals stuck with Burrow. He completed 17 of 25 passes for 124 yards. They ran it seven times for 31 yards in the half with the long Burrow’s scramble touchdown.

Late in the first half, Bengals nose tackle Josh Tupou went down with a calf injury and was lost for the game at spot where they’re also missing starter DJ Reader. Cincinnati also finished the game without the services of star linebacker Logan Wilson, who left in the fourth quarter with a right shoulder injury. Defensive tackle Jay Tufele, a waiver wire pickup at the cut down, got his first snaps of the season. In pregame the defensive line also lost rookie end Jeffrey Gunter with a knee injury.