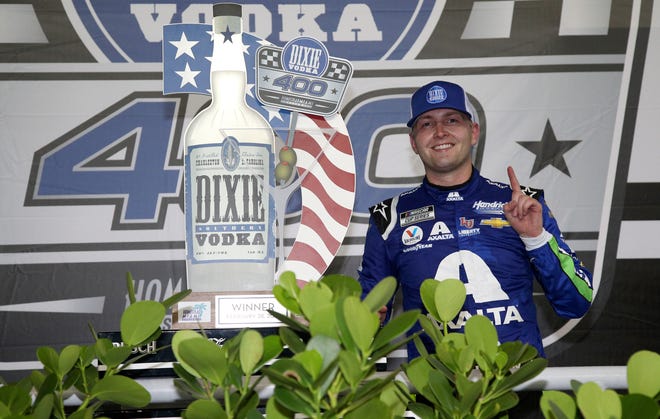 The NASCAR Cup Series wrapped up the south beach swing to the South Beaches of the Sunshine State Sunday, Feb 28, 2021 for the Dixie Vodka 400 hosted by Homestead-Miami Speedway, NASCAR opened the gates for race spectators for 10,000 fans under pandemic restrictions.

Sunday’s NASCAR Cup Series race at Homestead-Miami Speedway was set by applying the statistical formula that NASCAR utilized for the majority of its 2021 races. Denny Hamlin awarded pole position by virtue of the mathematical formula.

Brad Keselowski muscles the lead from Logano and opens up a 3 1/2 second lead over his teammate as the competition caution waves.

Eight laps to go in Stage 1, Brad Keselowski and Chris Buescher battle both the track and each other collectively. Martin Truex Jr. wants to hunt breaking the top five.

Chase Elliott leads the field out of the restart as a pack of hungry drivers breathing down his neck.

Impressive showing for Hamlin, starting in the rear working his way to 10th setting his sights to the front.

24 laps to go in Stage 2, Martin Truex Jr. secures the lead for the first time this season.

A Corey LaJoie caution with 6 laps to go allows teams to pit for final shoot out.

William Byron and Hamlin occupy the 1-2 spot in the restart as approaching Drivers fight for position.

With 91 laps remaining, William Byron secures the lead with Kyle Larson and Denny Hamlin battling for second. Chris Buescher would fade to 19th place after a disappointing restart.

William Byron continues to hold his own with 28 laps remaining with Larson and Truex Jr. rounding out the top three.