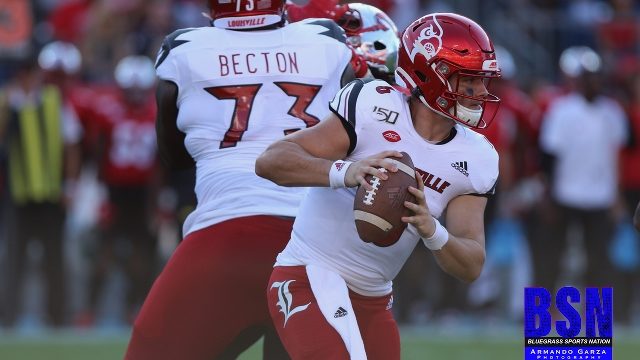 CARDS get the win in Music City

The “little team that could” or, perhaps more appropriately, “the little team which hoped it would”from Conference USA (WKU), stepped out on Saturday afternoon to determine whether it was any contest for an ACC, Atlantic Division, University of Louisville team most predicted would “bottom-feed” in 2019. The question was fairly answered, though the commissioner of Conference USA may not appreciate the response.

After three solid performances during which Louisville appeared to improve from one to the next, WKU might have done well to listen to the late Granddaddy Long. There’s perhaps a porch back in Bowling Green, Kentucky where the “Big Red” dog may have felt way more comfortable than the Toppers looked at Nissan stadium playing the new-look Louisville Cardinals.

On a day when Jawon Pass wouldn’t play owing to injury (listed “Day to Day”), and the Cardinals would turn over its offense to Malik Cunningham before he too went down to injury, the offense struck over the top and stretched the WKU defense better than it has done to date, even with Pass at the controls. Louisville, who ended up with a true freshman, Evan Conley, at the controls to finish it out for the Cardinals, scored 38-points on the day.

The offense made 21 first downs behind 210 rushing yards and 205 passing yards. The Defense would surrender 245-yards through the air (mostly in the second half with the game not really in question) but only allowed 43-yards on the ground in 23 attempts. The sum total of the combined effort totaled an escape from Nissan Stadium with a 38-21 final margin which really wasn’t as close as it may sound and a 2nd win on the year in the “won-lost” equation in Louisville’s first three games.

Coming into the game on BSN, we forecast an emphasis for this offense would be to stretch the WKU defense. It would appear that analysis was on the money. It would further appear Satterfield’s offensive charges would leave Nashville with some film which might give future opponents some reservation about crowding the box, regardless of which QB is trotted out to take snaps from center.

The game could have been vastly different. Right before halftime, WKU had the football threatening to take a manageable 24-7 deficit into the halftime locker room with time in the second half to make a game of it. As it turns out, the Toppers were able to score 21 second half points so, without Rodjay Burns’ big play right before the halftime, who knows.

All of that being said, Burns was able to suck the air out of the Nissan Stadium home crowd when he scooped up WKU QB’s fumble and rumble into the end zone right before the half to make the margin at the break 31-7 instead of 24-7. Let us assure you, 31-7 at the half versus 24-7 at the half, with a break like that against you, can really do a number on a team psychologically.

With all of that being said, BSN tips its hat to a WKU team that, while overmatched and “out-athleted” still fought to the bitter end and never appeared to quit regardless of the margin. The way in which the team continued to fight was a credit to Coach Helton’s staff and team.

The manner in which U of L was able to keep the Toppers held down and distant, even where they were perpetually trying to scratch and claw their way back into the game was equally a credit to Coach Satterfield and his staff and team. On the day, it was an impressive performance for a Cardinal team which can’t afford to lose games like today with the upcoming conference slate which lies ahead.

If today’s performance is any indication, it would appear these Cardinals may be a much improved squad over the one many teams around the ACC were anticipating having to play. Not only are they better overall, but they appear to be more dynamic in the down-field game as well. BSN would recommend the Louisville coaches go ahead and put a robust check-mark in the working on the big-play offense portion of the weekend “to-do” list for this Saturday afternoon in Nashville, Tennessee.

Reporting for the Bluegrass Sports Nation, this is Fletcher Long, your Cardinals Football correspondent reminding the U of L football fans everywhere to continue to PLAY THROUGH THE WHISTLE!