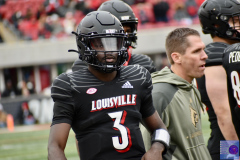 After last weeks subpar dwindled performance in a close loss against the tigers of Clemson, the cardinals of Louisville did more enough to bounce back, in their victory against the Orangeman of Syracuse. Today was also a special day for card nation, as former great Lamar Jackson had his jersey retirement celebration. Past players such as Michael Bush,Eric Wood, and many more came out for the special day.

The cards started the game off with a surge of offensive run plays, scoring the contests  first points. Let’s just say from then on it was cards all the way. Malik Cunningham’s performance in this game, will make you forget last weeks as he moved whichever way he wanted to. Whenever the Orangeman would try to answer back, the cards showed their dominance by power and scoring.

The defense of the cardinals definitely stepped up today in more ways then one. The QB1 of Syracuse was held to a total of 48 passing yards. They also held the Orangeman to 134  rushing yards, only scoring a total of 3 points. The cardinals  allowed a total of 184 offensive yards from Syracuse. They also had a total of 4 sacks to go with their great performance.

Offensively the cardinals had 219 passing yards, accompanied by 163 rushing yards w/  four different players scoring touchdowns. Jordan Watkins scored on a nice pass play moments before the end of the 1st half, having a total of 73 receiving yards & 1 touchdown. Although running back Mitchell didn’t score, he had a total of 102 rushing yards.

The ceremony for Lamar Jackson was something else, he  walked out and the crowd went crazy. Lamar stood on the sidelines with AD Vince Tyra & the schools president watching a video of key moments of his career at the University Of Louisville. Once the video was finished the crowd popped ever more yelling and cheering. Lamar was giving a special plaque with his pictures and jersey framed. The special ceremony finished with Lamar Jackson giving card nation a speech thanking them for their support.

5-5 is the record Louisville has after todays victory. There’s an added positive with being .500, . and that’s not blowing a lead in the 4th quarter that they’d been accustomed to doing this season. The cardinals face off against the blue devils of Duke on the 18th of November.