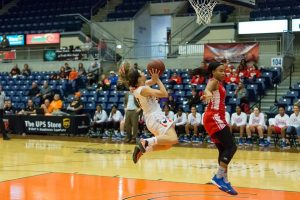 MCKENZIE, Tenn. — It’s a quality win no matter how you shake it, but the University of Pikeville women’s basketball team’s 71-62 win over No. 11 Bethel on its home court is even sweeter due to a career night for senior Jamie Castle in the MSC/SSAC Challenge.

After losing a season to a knee injury, one that kept her off the court for an NAIA Fab Four, the senior from Salyersville, Ky., has no doubt been prepping for a night like this.

Castle’s performance also gives the Bears (2-2) their highest-ranked win since beating No. 6 Vanguard in the first round of the 2016 NAIA Tournament.

UPIKE needed every one of her career-high points too as it battled back and forth with the Wildcats all night long.

The Bears led by 11 points at 19-8 in the first quarter on a 3 by Kayla Mullins, but Bethel (2-2) went on a 7-0 run midway through the second quarter to take a seven-point lead of its own.

Bethel thought it had some room to breathe with a 42-36 lead four minutes into the third quarter, but a 10-4 Bear run followed, including five points from Castle, to knot the score at 46. UPIKE ended up scoring the last four points of the frame on layups by Elisabeth Latham and Zaria Hollier to lead 52-48.

The fourth quarter started with three straight buckets by Castle, helping the Bears never trail in the frame despite Bethel briefly making it a one-point game with 5:40 left. A 6-0 spurt by the Bears over the next two minutes made the difference as Mia Greatrex made two straight layups and Castle added a jumper to go back in front by seven.

UPIKE enjoyed a lead of 11 points in the final moments when a pair of makes at the stripe by Castle made it 71-60 with 15 seconds on the clock.

Rachel Lee added nine points, Greatrex finished with eight and Latham went for seven points and eight rebounds. Bethel was led by Briana Fields with 18 points and Laurhen Pickett chipping in with 15.

The Bears won despite being outrebounded 39-32, but they did outshoot the Wildcats 46 to 36 percent and had four less turnovers.