CATS and CARDS Meet with Bowl Implications on the Line 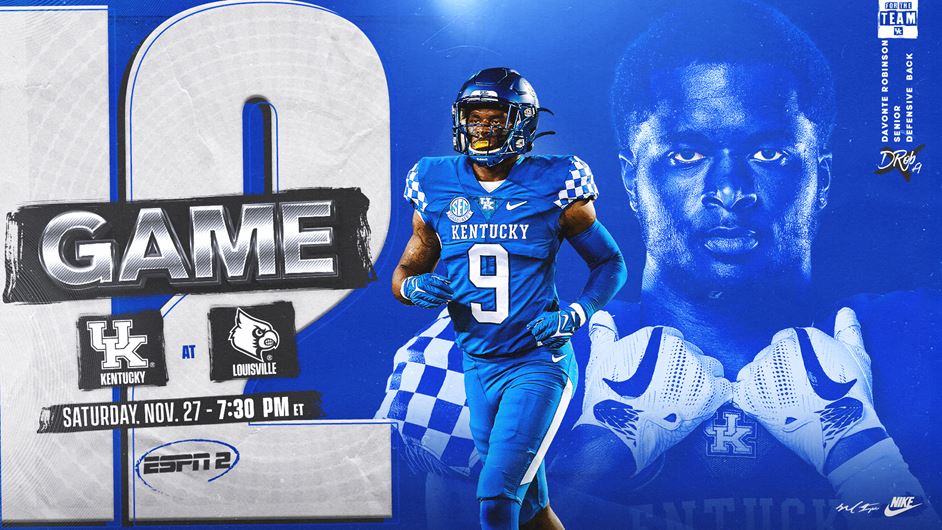 Kentucky closes the 2021 regular season with a trip to Louisville on Saturday night looking to claim the Governor’s Cup for the third straight meeting. Game time is 7:30 p.m. ET and it will air on ESPN2 and the UK Sports Network.

The Wildcats are looking to extend their non-conference winning streak to 15 games, which is the second-longest active streak in the country. A win also would give UK nine wins in the regular season for the second time since 1977 (both under coach Mark Stoops, 2018).

Offensively, the Wildcats have been guided by quarterback Will Levis, who is completing 65.8 percent of his passes for 2,444 yards and 23 touchdowns. Levis’ top target has been Wan’Dale Robinson, who is among the leading receivers in the nation with 85 catches for 1,067 yards and six TDs. The ground game has been paced by Christopher Rodriguez Jr., who has rushed for 1,151 yards and seven scores, and he ranks second in the league in rushing with 104.9 yards per game. The trio is just the second in school history to reach 2,000 yards passing, 1,000 rushing and 1,000 receiving in the same season.

The Kentucky defense has been exceptional at times in 2021, with linebackers DeAndre Square and Jacquez Jones leading the team in tackles, while safety Yusuf Corker and defensive end Josh Paschal are among the SEC leaders in pass breakups and tackles for loss, respectively.

After not playing last season due to COVID-19 restrictions, Kentucky and Louisville will renew their intrastate rivalry on Saturday at Cardinal Stadium.

UK head coach Mark Stoops realizes that some players on his current squad have never faced Louisville, something that he plans to address.

“A good dose of our team, the past two classes, have not played Louisville,” Stoops said. “This rivalry needs to be introduced to a few of our players who haven’t been exposed to it.”

Stoops knows that the Cards are playing better as the season has moved on. He knows this is not the same team that the Cats beat two seasons ago…Read More

• The Governor’s Cup was created in 1994 as the trophy for the winner of the Kentucky-Louisville game. Donated by The Kroger Company at a cost of $23,000, the Governor’s Cup stands 33 inches tall and weighs 110 pounds. The trophy’s base and upright columns are hand-milled black marble. The glass components are optic-grade crystal. All metal parts are 23-karat, gold-plated brass. The cup itself is made of pewter with a 23-karat gold-plated finish.
• The cup was designed by Kendall Costner and sculpted by James Corcoran of Bruce Fox, Inc. The Kroger Company also is involved in supporting academic pursuits at the schools. Kroger is donating $10,000 to each school for each year the game is played. Including this year, Kroger’s donations now total $540,000 — $270,000 to each school.

A UK Win Would…

• Be Kentucky’s 15th consecutive non-conference victory, the second-longest active streak in FBS, dating to the beginning of the 2018 season.
• Boost UK to 20-3 in last 23 non-conference games dating to 2016. Give Coach Mark Stoops 58 career victories at UK, putting him just two wins shy of tying Paul “Bear” Bryant for the school’s all-time winning coach.
• Give UK nine wins for the second time in Stoops’ tenure as head coach (2018, 2021).
• Be just the second time UK has won nine games in the regular season since 1977 (2018, 2021).
• Be UK’s third consecutive win the series and fourth in the past five meetings.
• Improve UK’s record on Louisville’s home field to 9-5.
• Give the Cats three straight wins vs. Louisville at Cardinal Stadium (2016, 2018).
• Be the fourth consecutive season UK closes its regular season with a victory.