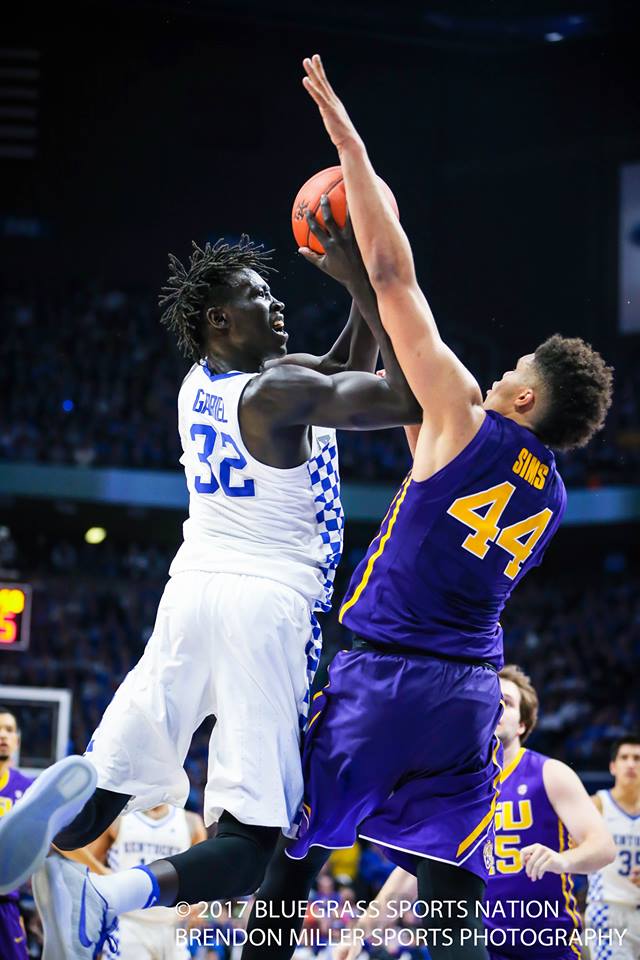 Gabriel with the drive against LSU – Photo by Brendon Miller

After losing 3 of their last 4 games, the UK Wildcats defeated LSU 92-85 in Rupp Arena last night.  Kentucky improves their record to 19-5 overall and 9-2 in the Southeastern Conference. Kentucky fell to number 15 in this week’s rankings after an embarrassing road loss to Florida Saturday.  The Cats will travel to Tuscaloosa this coming Saturday to face an Alabama team coming off of 4 overtime win at South Carolina.

Kentucky went with their usual lineup of Briscoe, Fox, Monk, Gabriel and Adebayo for the 16th time this year to start the game.  Fox opened up the game with a quick 3 pointer on the Cats’ first possession, extending the UK streak to 999 straight games with a 3 pointer.  Gabriel took over the game after that scoring 11 of the next 13 points for the Cats.  Kentucky took a 43-27 lead into halftime looking like the team we saw in the first half of the season.

Out of halftime, UK scored the first five points of the half to extend their lead to 48-27 but the Tigers fought back, going on a 10-0 run to bring them within 11 points.  Briscoe scored his first field goal of the game with just over 12 minutes to play and then rattled off UK’s next 8 points.  LSU rallied to within 6 points in the last minute of the game but the Cats held on for the win 92-85.

Evidence of Coach Cal’s “reboot” was pretty obvious in the first half.  Guards Fox and Briscoe stepped up their defense on the LSU guards forcing LSU turnovers resulting in UK points.  A big part of the reboot, according to Coach Calipari, included Briscoe creating shots for his teammates.  Cal said, “We’re looking for him (Briscoe) to create 18, 20 shots a game. That’s what we want from him.”  Briscoe was up to the task and created 12 shots for Wenyen Gabriel.  Gabriel capitalized on his opportunities throughout the game and ended with a career high 23 points to go along with 8 rebounds and 2 assists.  (Interesting fact: UK is 7-0 when Gabriel scores in double figures.)  When asked about the ‘reboot’, Wenyen Gabriel said, “Cal, last practice, started redefining our roles. Cal told me I’m a finisher, and that’s one of the things I was looking to do offensively.”

Malik Monk also had 23 points but came away for the second straight game with no rebounds.  If the cats are going to go deep into tournament play, everyone will have to step up like Briscoe and Gabriel did last night.  Phase one of the reboot is now over.  Looking forward the Cats need better production from Bam Adebayo, Isaac Humphries and Derek Willis.  Hopefully that will start to come in Tuscaloosa Saturday.  Game time for the Cats and the Crimson Tide is 1:00 p.m. and the game will be televised on CBS.  Many think that the Tide will be tired coming off of that 4 overtime road win but when Kentucky comes to town everyone always plays their best game. UK has only seven games left in the regular season to get things going in the right direction.  With Tennessee, Georgia, and Florida coming up in 3 of the next 5 games, lets hope this reboot has sparked new life into the Cats.