CATS Bounce Back in Close Win Over Crimson Tide 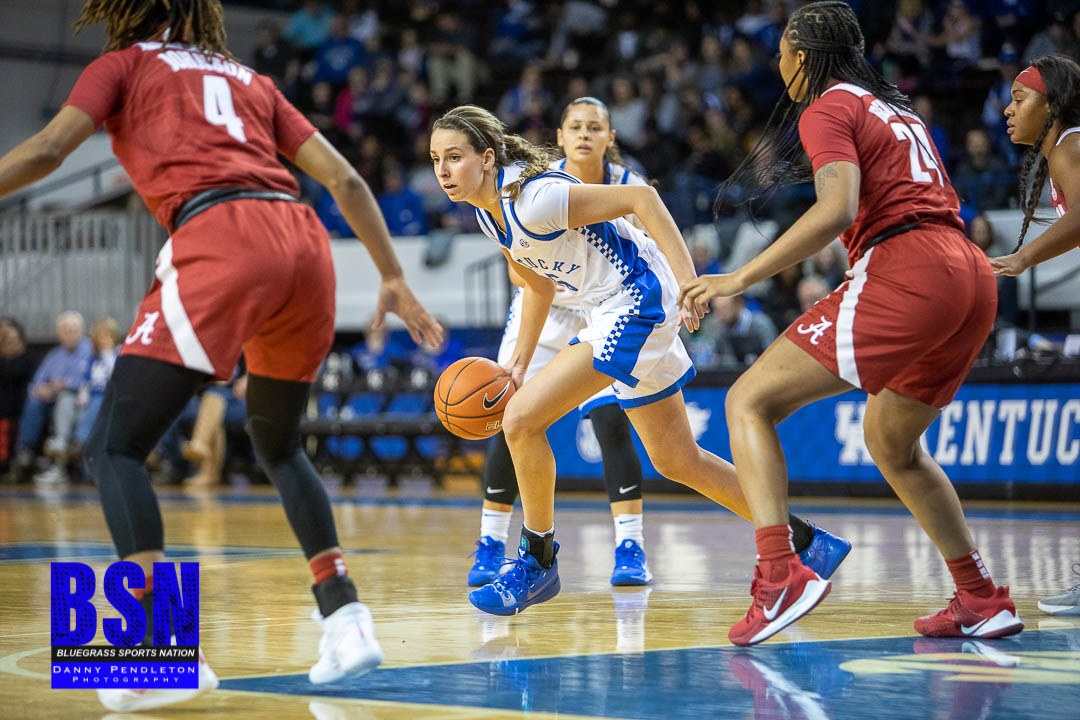 After an eye-opening loss to the Florida Gators in their last outing, the Kentucky Wildcat’s Women’s basketball team played host to the visiting Alabama Crimson Tide on Thursday night in Memorial Coliseum as they were looking to get themselves back in the win column.

The Cats entered the game at 17-4 on the season, with their most recent loss coming in their last outing in a rather shocking way. Kentucky let an 18-point lead slip away from them in the final 20 minutes of play to result in a 70-62 loss to the Florida Gators.

The Cats and Crimson Tide are not new opponents however, with their last matchup coming back on January 9th in Tuscaloosa where Kentucky star Rhyne Howard tossed in a career high 43 points to lead the Cats to an 81-71 victory.

Their meeting in Lexington would be a bit different, with Rhyne Howard still sidelined with a fracture in her hand, Kentucky would be forced to throw all sorts of different lineups at the Crimson Tide in order to try and generate some offense in Rhyne’s absence.

Both squads had a rather slow start to the night, and it wasn’t until the very end of the quarter that some shots began to fall.

If it wasn’t obvious that Kentucky was without their leading scorer before, it was now.

The Cats shot a staggering 27% from the field in the first quarter and only managed to score 14 points overall. On the other end, their defensive pressure forced 6 first quarter turnovers and allowed them to close out the first period with a 14-10 lead.

Coming out in the 2nd quarter it seemed to be more of the same. Both teams were able to produce a little bit more scoring, but not much as the Kentucky only shot 31% from the field compared to Alabama’s 40% shooting on the half.

Kentucky was led in scoring for the first 20 minutes by Sophomore Transfer Guard Chasity Patterson who was able to chip in 9 points and pick up a couple of steals in the half to secure the 31-27 halftime lead for the Cats.

Right out of the gate in the 3rd quarter Kentucky seemed to have found their rhythm, finally hitting shots and building the lead to as large as 10 points. The Crimson Tide were not to go down easily though, putting together a run of their own to bring the game back and only allow Kentucky to end the quarter with a 49-43 lead.

As expected, the 4th quarter was a battle, and thankfully a battle that the Cats won.

Even with their offensive struggles in Rhyne’s absence, the Cats were able to find a way to get it done at home as they escaped with a 66-62 victory in order to get themselves back in the win column and make their climb back up the SEC standings.

Kentucky was led by the charge of senior guard Sabrina Haines who finished with 14 points, 4 assists, and 6 rebounds on the night, with 12 of her 14 coming from beyond the arc.

The Cats improve to 18-4 on the year and will take the floor again on Sunday at 4pm as they travel to Fayetteville to do battle with the Arkansas Razorbacks in another SEC road test.