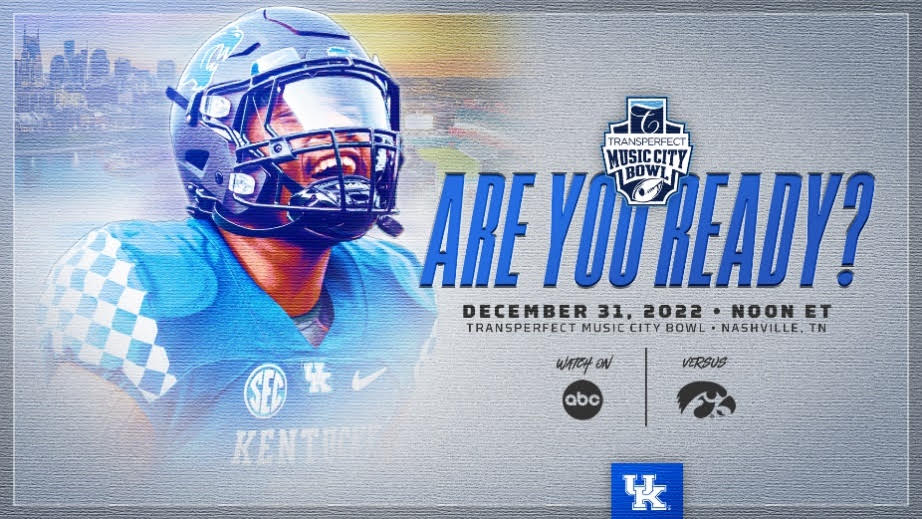 Wildcats to play in the TransPerfect Music City Bowl, will face Iowa at noon ET on New Year’s Eve

LEXINGTON, Ky. – In a rematch of one of the most exciting games of the 2021 bowl season, Kentucky Football is headed to Nashville to take on Iowa in the TransPerfect Music City Bowl on New Year’s Eve. The Wildcats and Hawkeyes will tangle at noon ET (11 a.m. Central time in Nashville) at Nissan Stadium in a game that will be nationally televised by ABC.

“On behalf of our team and all of us at the University of Kentucky, we are excited to accept the invitation to the TransPerfect Music City Bowl,” said Coach Mark Stoops, who will be facing his alma mater for the second consecutive season. “The Big Blue Nation always paints Nashville blue and the hospitality is second to none.  We look forward to a great week and our team can’t wait to play one more time this year!”

With the Music City Bowl celebrating its 25th year of existence, it is fitting that the team that has made the most appearances in the postseason game, Kentucky, will be making its sixth trip to the event.  All five previous UK games have been decided by eight points or less, with the Wildcats posting a 2-3 record in those hotly contested affairs.

“We’re honored to receive the invitation to the TransPerfect Music City Bowl,” said Mitch Barnhart, UK Director of Athletics. “It will be an exciting day for Wildcat fans as our football team plays in Nashville while our men’s basketball team takes on Louisville in Rupp Arena.  We know it presents a challenge for our fans and staff, but just as we did in similar circumstances in 2017, I’m confident that the Big Blue Nation will turn out strong in both locations.

“We’re also honored to represent the Southeastern Conference in the 25th year of the Music City Bowl and I want to recognize Bowl President Scott Ramsey and the Nashville Sports Council for their years of service to college football.   We’re looking forward to what we hope will be a big New Year’s Eve for the Wildcats!”

All Kentucky football season ticket holders and eligible K Fund donors who placed a Music City Bowl request during the priority request period (Nov. 16 – Dec. 1) will receive tickets, and confirmation emails will be sent Sunday evening (Dec. 4). Tickets ordered during the priority request period will be allocated into the best seat locations in Kentucky’s official allotment and assigned in order of K Fund priority point ranking later this week.

After holding tickets to fulfill all priority requests and internal needs, tickets in Kentucky’s official allotment are sold out. Public tickets are now available directly through MusicCityBowl.com and Ticketmaster.com. Kentucky will be on the east side of Nissan Stadium. Student ticket information for the Music City Bowl will be available on Sunday evening, online at UKFootballTix.com.

Kentucky enters the game with a 7-5 record, the sixth time in the last seven years that the Wildcats have won at least seven games, with only the Covid-shortened 2020 season interrupting the trend. The Wildcats enter the game following their fourth straight Governor’s Cup win, a 26-13 victory over in-state rival Louisville.  It is the fifth straight year that the Wildcats completed the regular season with a win, the first time in school history that has been accomplished.

Offensively, the Wildcats have been guided by quarterback Will Levis, who is completing 65.4 percent of his passes for 2,406 yards and 19 touchdowns. Levis has spread the wealth in the passing game, with the top receivers being Barion Brown, who set UK freshman records for most catches (45) and yards (604) and had four receiving touchdowns; senior graduate transfer Tayvion Robinson, who nabbed 35 balls for 470 yards and three TDs; and Dane Key, 31 for 472 yards and a UK freshman record six TD catches. Senior running back Chris Rodriguez Jr. leads the ground attack, rushing for 904 yards and six touchdowns, averaging 113 yards per game in the eight games he has played.

Kentucky ranks 12th in the nation in scoring defense, allowing 19.1 points per game, and 18th in total defense, giving up 320.2 yards per contest.  It has been a team effort, with 14 Wildcats accumulating at least 30 tackles on the season. Linebacker D’Eryk Jackson leads the way with 63 tackles, followed by safety Jordan Lovett with 59, linebacker Jordan Wright with 58, and linebacker DeAndre Square with 58, despite missing three games because of injury.  Leaders in other defensive categories are Wright in tackles for loss (8.5); linebacker J.J. Weaver in quarterback sacks (3) and fumble recoveries (3); cornerback Carrington Valentine in pass breakups (10); and two interceptions each by Lovett, linebacker Trevin Wallace and cornerback Keidron Smith.

Iowa also enters the game with a 7-5 record and features a defense that has been even stingier than Kentucky’s. Iowa ranks fourth in the nation in total defense, allowing only 277.9 yards per game, and is sixth in the nation in scoring defense, allowing just 14.4 points per contest.  Senior linebacker Jack Campbell, the Big Ten Defensive Player of the Year, has 118 tackles, 3.5 tackles for loss and two interceptions. Campbell was joined by eight more teammates earning All-Big Ten honors, including defensive linemen Lukas Van Ness, Joe Evans, Logan Lee and Noah Shannon; linebacker Seth Benson; and defensive backs Riley Moss, Cooper DeJean and Kaevon Merriweather.

The Iowa offense is guided by quarterback Spencer Petras, who has thrown for 1,725 yards and five touchdowns. Petras’ top target is senior tight end Sam LaPorta, who has 53 catches for 601 yards and a touchdown. Kaleb Johnson is the leading rusher with 762 yards. 5.4 yards per carry, and six touchdowns.

The TransPerfect Music City Bowl extends Kentucky’s school-record streak of seven consecutive bowl appearances, all coming under Stoops.  That is one of multiple milestones he’s achieved this year.  He became the longest-termed coach in school history, 10 seasons, and his win at Florida was his 61st with the Wildcats, breaking the school record of 60 victories by Paul “Bear” Bryant.  Stoops and the Cats also broke the school record for most consecutive wins against non-conference opponents, a streak that now reaches 20 games – the longest active streak in the nation – and will be on the line in the bowl game.